The Elate Eight continues with an intriguing match-up between Margaret of Scotland and Enmegahbowh. One of the sub-plots of this round has been “What will Celebrity Blogger Heidi Shott possibly come up with for Enmegahbowh kitsch?” This will be answered today as these two pillars of the faith vie for the third spot in the Faithful Four.

Yesterday, Dietrich Bonhoeffer punched his ticket to the next round by ousting Jerome 74% to 26% and joining Mary Magdalene in keeping their Golden Halo hopes alive.

To make it this far, Margaret defeated William Temple and John Cassian while Enmegahbowh beat Thomas and David Oakerhater. Check out the updated bracket to see what’s coming up in Lent Madness.

Meanwhile, back at Lent Madness HQ, Tim and Scott plot to launch an entire line of saintly kitsch. Kitsch-meisters? You bet! Speaking of which, check out our recent post Kitsch Cranks (which really should have been spelled “Kranks”) and read about Lent Madness in the Huffington Post. 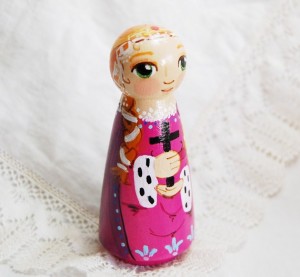 Hey, all you Margaret fans! How does one show one’s admiration for and devotion to (Queen) Margaret of Scotland? There are just too many options to show here, but I picked out a few for your consideration:

If she’s a queen, there must be a doll, right? And indeed there are several dolls one can purchase for your saintly queen doll collection. First, there’s this wooden peg doll, made to order, featuring the blonde queen (she was Saxon after all) holding a black cross and wearing a tartan sash (“not historically accurate but cute all the same”). 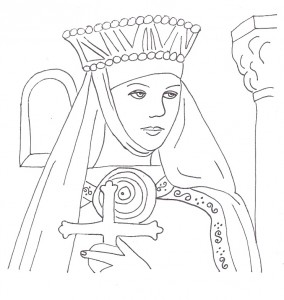 Or, if a wooden doll doesn’t seem cuddly enough, here’s a whimsical Margaret of Scotland Felt Saint Softie. This Margaret is holding her special book of Gospels that miraculously did not show any water damage after being dropped into a river and she is also wearing a special prayer on her back. I personally am planning to buy one of these! 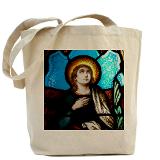 Want to color your own St. Margaret? Download this coloring page and experiment with different queenly shades for her outfit and fingernails! 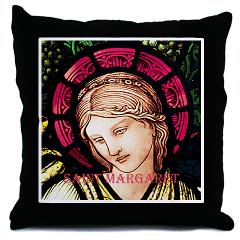 Speaking of home, if your taste runs more to home furnishings than dolls and coloring pages, here’s a St. Margaret throw pillow for your sofa or favorite chair so that you can read your morning p

rayers and devotional books with the saint by your side. The same design can be ordered on a coffee mug, ornament, or keepsake box.

St. Margaret can also reign over your refrigerator from this handy (and lovely!) “attention-grabbing” magnet set. Order just one, or a pack of 100, so you can share with all your St. Margaret-loving friends! (Ye 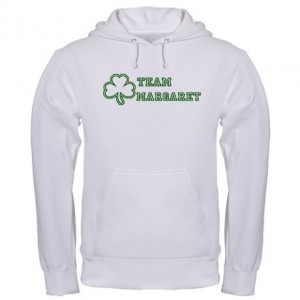 s, it’s the same design as the pillow, but, hey, it’s “stained glass!” And you can also “Liven up any room or party with our fun, hip” St. Margaret tile coasters!) 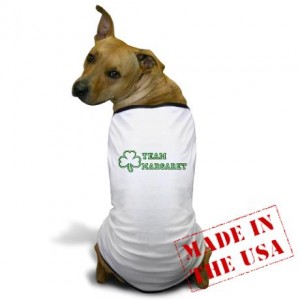 Finally, while you’re out and about (visiting the St. Margaret Pub in Twickenham, say), show your Team Margaret pride and solidarity while wearing this great Team Margaret Hoodie and make everyone guess why there’s a shamrock on the front. Pair this with the Team Margaret doggie shirt for your canine companion for the ultimate in kitschy Margaret-wear!

As predicted by a member of the SEC, commercial kitsch featuring Enmegahbowh, the first Native American to be ordained as an Episcopal priest, is scarce. In fact here’s a screenshot of an early attempt to turn up any product that would even begin to rival yesterday’s St. Jerome/Lion Reversible Doll.

Enter the fans! Team E supporter Mary-Elise Haug offered an assist by sending along a Not For Sale (and one-of-a-kind, we suspect) item honoring the “Providential Man” himself. This handmade doll depicting Enmegahbowh was on display in 2007 at the Native American Ministries Winter Talk Conference held in Jamestown, Virginia, to mark the 400th Anniversary of Jamestown. 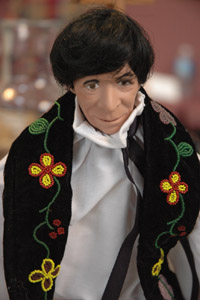 Please take note that the stole he’s wearing is identical to the one in the icon displayed during the Saintly 16 round.  Excellent attention to detail, Dollmaker!

Are we surprised by a sad lack of cheesy saint crap? No! John Johnson Enmegahbowh was a serious man serving his people and his Church during a very serious era of the American experiment. It’s not surprising that his kitsch-factor is low.

However, that’s not to say he wasn’t a funny guy. So, in lieu of sufficient kitsch, here are a couple of stories: In 1874 Enmegahbowh wrote with stunning poignance to the Office of the Indian Commission at 30 Bible House in New York to report the death of his great friend and fellow Christian, Chief Nabunashkong, aka, Isaac H. Tuttle.

In telling the story of Tuttle’s conversion and his role in it, Enmegahbowh revealed his mischievous side. As a mark of Tuttle’s new faith, he asked his Enmegahbowh to cut his long locks of hair, a symbol of his standing in the tribe. Enmegahbowh wrote:

“…When it was all over, he took wild, and threw his head in every direction, to see if any one coming to see him. I smiled, and pitied him greatly. ‘Friend,’ he ask, ‘what made you smile?’

“I said: ‘You look precisely like the baboon I saw at Barnum’s Museum in New York, some years ago.’”

Then there’s another story that tells of the feistiness of his wife, Biwabiko-gizig-okwe or Iron Sky Woman, (or Charlotte, if you must). It also indicates a measure of Enmegahbowh’s humanity, if not his good humor, and offers a fuller explanation about why he and Methodists at Fond du Lac parted company early in his ministry. The “Man Who Stood Before His People” also stood by his wife. Fair play to him! The story goes that in 1849 Iron Sky Woman and a fur trader got into an argument.

According to Owanah Anderson in Forward Movement’s 1988 volume, Jamestown Commitment: The Episcopal Church and the American Indian, “…a white man insulted En 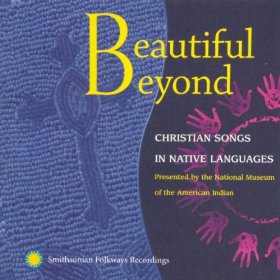 megahbowh’s wife Charlotte and that Enmegahbowh knocked the man down and held him while his wife gave the worthless man a sound beating.”

Beyond the pricelessness of story, there is at least one thing for sale that offers a wonderful reminder of Enmegahbowh’s legacy. Holy Women, Holy Men credits him with training “many others to serve as deacons throughout northern Minnesota. The powerful tradition of Ojibway hymn singing is a living testimony to their ministry. His understanding of Native tradition enabled him to 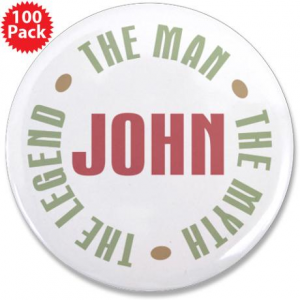 enculturate Christianity in the language and traditions of the Ojibway.”

For $.99 cents you can buy an MP3 and hear the Ojibwe Hymn Singers’ lovely rendition of “On the Beautiful Beyond.”

And finally, if you need a button to sport on your General Convention nametag, how about this? Unfortunately they only come in packs of 100.

The Supreme Executive Committee subtracted 80 votes from Enmegahbowh at 12:33 a.m. EDT, because of voting irregularity we discovered. The person(s) involved have been blocked from Lent Madness. Remember, we encourage you to spread the word about your favorite saints. However, voting 50+ times from one computer is not allowed.

Margaret of Scotland vs. Enmegahbowh

73 Comments to "Margaret of Scotland vs. Enmegahbowh"