Today Margaret of Scotland takes on John Cassian and we hear two accounts of relics as they both seek to get “a head” to the next round. The Quirks & Quotes continue with the winner facing Enmegahbowh next week.

In a spirited and emotional battle, Dietrich Bonhoeffer defeated Brigid of Kildare yesterday 54% to 46%. This match-up inspired poetic responses from many Lent Madness partisans. Bonhoeffer will face Jerome in the Elate Eight. Check out the updated bracket to see how things stand heading into tomorrow’s match-up between Emma of Hawaii and Paul of Tarsus. 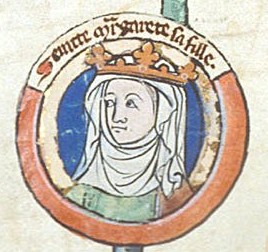 Margaret of Scotland (1045? – 1093) was a Saxon princess, great-granddaughter of Ethelred the Unready, perhaps born in Hungary and certainly raised there before returning to England as a young girl. She arrived in Scotland by accident, shipwrecked in the Firth of Forth during flight from England back to Hungary after the Norman invasion of 1066. There she caught the eye of King Malcolm III, who convinced her to marry him despite her desire to become a nun. Malcolm had come to the Scottish throne after killing MacBeth, who some years before had killed Malcolm’s father Duncan, which you may have read about in high school.

Margaret and Malcolm had eight children. Perhaps not surprisingly, Margaret needed a place of her own to go and pray, and she found a cave outside the castle in Dumfermline  for that purpose. Her frequent nocturnal visits to the cave aroused suspicion that she was meeting someone there and plotting against her husband; legend has it that Malcolm followed her one night, only to discover her deep in prayer, beseeching God to enter Malcolm’s heart. Oops.

Margaret was known for her piety and for her lavish generosity. She personally fed nine orphans breakfast each day and invited the poor to visit the Royal Hall to receive alms, food, and clothing after breakfast. Her biographer, Turgot (Bishop of St Andrews) said of her,

“Not only would she have given to the poor all that she possessed; but if she could have done so she would have given her very self away. She was poorer than any of her paupers; for they, even when they had nothing, wished to have something; while all her anxiety was to strip herself of what she had.”

Turgot also told of her beautiful book of Gospels with a jeweled cover. One day, the book fell into a river; it was found later, perfect, with no water damage. The book now resides in the Bodleian Library at Oxford.

Ever desiring to assist people of all sorts, she also established a ferry system to take pilgrims to and from St. Andrews church in Fife to visit the relics of the apostle Andrew there.

Speaking of relics, when Margaret died, she was buried in Dumfermline. Two hundred years later, after she was canonized, her relics were translated to a new shrine nearby. During the Scottish Reformation, her head was given to Mary Queen of Scots, while the rest of her relics were acquired by Philip II of Spain. Philip apparently placed the relics in a special urn in a special place, and they were never found again. Meanwhile, when Mary died, Margaret’s head was secured by some French Jesuits, but like many other heads, it was lost during the French Revolution.

Let’s allow Bishop Turgot to have the last word about Saint Margaret: “No more beautiful character has been recorded in history.” 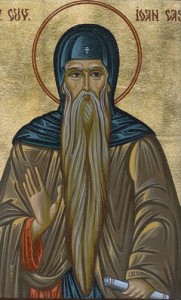 Many Christians celebrate the feast of John Cassian on February 29 — what’s generally known as Leap Year. This happens only once every four years (including last month) so people often transfer his feast to another date.

John Cassian’s relics are kept in an underground chapel in the Monastery of St. Victor in Marseilles. While his head and right hand are in the main church, there’s no word on the whereabouts of his left hand.

Theologically, Cassian would later be identified with the semipelagians, emphasising the place of free will in the first step to salvation – without the need for God’s grace to initiate that. His is a middleway between Augustine and Pelagius and, while never canonized by the Rome, the Orthodox view Cassian as fully orthodox.

In Cassian’s Institutes (De Coenobiorum Institutis, 420-429 AD), he devotes a book to each of the eight, what he terms, “principle faults.” It was Pope Gregory I who combined acedia with sadness as part of developing the idea of the “seven deadly sins” that are more commonly known today.

Below are four Cassian quotes on the subjects of friendship, diet, prayer, and the reception of communion:

“The bond between friends cannot be broken by chance; no interval of time or space can destroy it. Not even death itself can part true friends.”

“I shall speak first about control of the stomach, the opposite to gluttony, and about how to fast and what and how much to eat. I shall say nothing on my own account, but only what I have received from the Holy Fathers. They have not given us only a single rule for fasting or a single standard and measure for eating, because not everyone has the same strength; age, illness or delicacy of body create differences. But they have given us all a single goal: to avoid over-eating and the filling of our bellies… A clear rule for self-control handed down by the Fathers is this: stop eating while still hungry and do not continue until you are satisfied.”

“Prayer changes at every moment in proportion to the degree of purity in the soul and in accordance with the extent to which the soul is moved either by outside influence or of itself. Certainly the same kind of prayers cannot be uttered continuously by any one person. A lively person prays one way. A person brought down by the weight of gloom or despair prays another. One prays another way when the life of the spirit is flourishing, and another way when pushed down by the mass of temptation. One prays differently, depending on whether one is seeking the gift of some grace or virtue or the removal of some sinful vice. The prayer is different once again when one is sorrowing at the thought of hell and the fear of future judgement, or when one is fired by hope and longing for future blessedness, when one is in need or peril, in peace or tranquility, when one is flooded with the light of heavenly mysteries or when one is hemmed in by aridity in virtue and staleness in one’s thinking.”

“We must not avoid communion because we deem ourselves to be sinful. We must approach it more often for the healing of the soul and the purification of the spirit, but with such humility and faith that considering ourselves unworthy, we would desire even more the medicine for our wounds.”

67 Comments to "Margaret of Scotland vs. John Cassian"