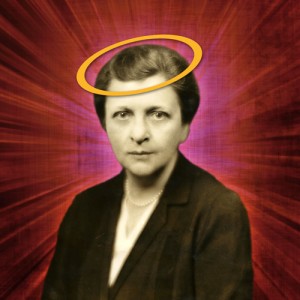 I must say I feel very much at home even though I just arrived. I feel at home because Lent Madness has, ever since it was established, been a sort of special concern of mine, although by the chicanery of politics it was not placed in the Department of Labor. I, of course, thought it should be.

I remember seeing ladies climbing up on great high stepladders and getting files out of shelves — dusty, dirty — many wearing gloves so they wouldn’t get their hands dirty while hunting through the files for information about saints. A terrific problem of recordkeeping! You don’t do that today.

Before I was elected, I had a little conversation with the SEC in which I said perhaps they didn’t want me to be the Golden Halo winner, because if I were, I should want to do this, and this, and this. Among the things I wanted to do was find a way of getting health insurance for the living and voter fraud insurance for the dead. I remember they looked so startled, and they said, “Well, do you think it can be done?” I said, “I don’t know.” They said, “Well, there are theological problems, aren’t there?” “Yes, very severe theological problems,” I said. “But what have we been elected for except to solve the theological problems? Lots of other problems have been solved by the people of Lent Madness, and there is no reason why this one shouldn’t be solved.”

Seems pretty similar to a famous speech she gave discussing the roots of Social Security. But then, when you’ve won the Golden Halo, who’s to question you?