With this our final round of Saintly Kitsch, the last spot in the Faithful Four is up for grabs. After a close race, Hilda of Whitby snuck by Harriet Tubman yesterday to join Frances Perkins and Oscar Romero as Lent Madness semi-finalists. Today it's Luke the Evangelist squaring off against Dorothy Day. Will the writer of Luke-Acts add another illustrious chapter to his legacy or will Dorothy carpe diem?

To get to this point Luke defeated Absalom Jones and John Donne while Dorothy made it past Edward Thomas Demby and Benedict of Nursia.

We've seen mugs and tote bags and trucker hats this week. Most of the Lent Madness faithful have enjoyed the respite from the serious business of learning even as the choices have become ever more agonizing. A handful have stormed off in a huff (though we have a funny feeling they're still voting). It's hard to believe there are only three voting days left in Lent Madness 2013. On Monday Frances Perkins will face Hilda of Whitby; on Tuesday it's Oscar Romero versus the winner of today's match-up; and on Spy Wednesday the two remaining saints grapple for the Golden Halo! 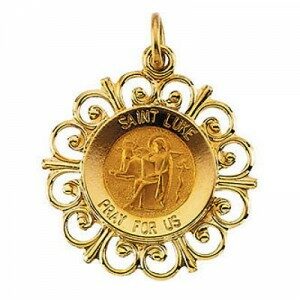 Keep your iPhone cases and T-shirts. Kitsch is not just about the cheap stuff. Questionable religious taste belongs to rich and poor alike, and for truly high-end saintly kitsch, apparently you need an evangelist.

It’s obvious that Luke, whose Mary extolled a God who has sent the rich away empty, would need a 14 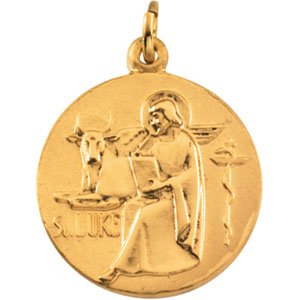 Karat Gold prayer medal. This stunning beauty, originally priced at $2,438.99, is available on Amazon for only $928.99  -- a 62% savings! Of course, it will take a couple days extra to ship from the seller, a company named (and I am not making this up) CleverEve Inc. Clever, indeed! Especially since numerous other 14K gold St. Luke pendants can be found on Amazon or eBay at prices ranging from $157. This one, for a mere $199, is especially tasteful. 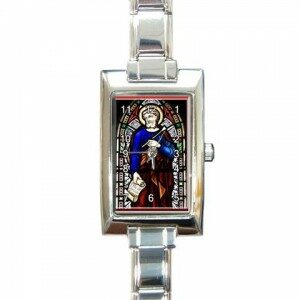 If you are looking for something more practical and economical, perhaps this Italian Charm Watch with Stainless Steel Band would do the trick. Available on eBay, the St. Luke watch “has 16 stainless steel blank Italian charm links and measures approx. 5.1/2", fully expanded approx. 7.1/2" and will fit most average sized wrists.” Add extra charm with extra charms! Question: Is Luke looking up like that in pain after being stabbed from the back by the watch hands? Or is he merely resting his hand on the mechanism to manage his carpal tunnel syndrome after writing the bulk of the New Testament?

You might wish to match the watch with these fabulous St. Luke earrings. That is, if you want to picture 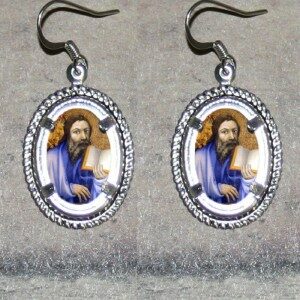 Luke as a creepy bibliophile, inviting to look closely at your earlobes and his etchings. 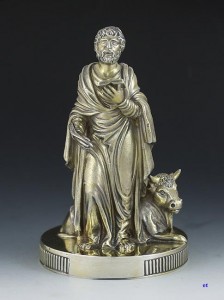 But for the truly highbrow, what you really want is Art, such as this “Nicely Cast European Silver Saint Luke.” I have no doubt that it is, as the seller describes, “a finely cast, European silver figurine made during the 19th century…in fabulous overall condition.” And to be fair, if kitsch describes something mass-produced, then this does not fit the bill. However, if you allow your definition to stretch to religious representations of dubious taste, one might allow that spending $960 for a 4½ inch tall silver representation of a gospel writer particularly concerned with the poor and needy might merit the mantle of kitsch. 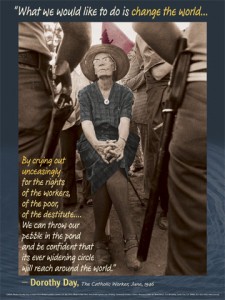 Like beauty, kitsch -- especially as it relates to the saints -- is in the eye of the beholder. What seems to some as appallingly cheesy as dogs playing poker with Elvis appears to others as magnificently inspiring as the ceiling of the Sistine Chapel, where, as it happens, we once lost a son to a dense pack tourists for 30 long minutes. But that’s another story.

Dorothy Day, the American lay woman who co-founded the Catholic Worker movement and served tirelessly throughout her life on behalf of people living in poverty, did indeed spawn kitsch, but, like the woman herself who always wore donated clothes and lived a very simple life, it’s austere kitsch. 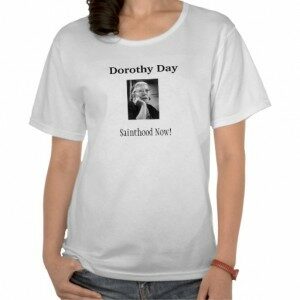 California protest organized by the United Field Workers in 1973. Seventy-six years old at the time, she was arrested later that day.

Those who are intent in promoting Day for sainthood have recognized the power of t-shirts and bumper stickers to make their case. The “Sainthood Now” campaign seems to speak with a revolutionary tone that Day might have endorsed for a less self-referential cause. 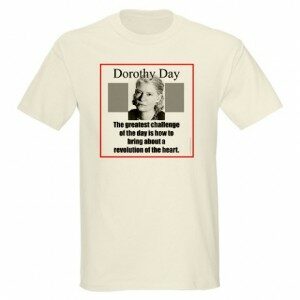 Speaking of revolution, this t-shirt captures the spirit of her conversion nicely, “The greatest challenge of the day is how to bring about a revolution of the heart.” Ain’t that the truth?

Of course, not all Google searches turn up treasures you can buy -- or even see. For example, the Dorothy Day Archives at Marquette University apparently house, tucked away in some “Raiders of the Lost Ark” storeroom, the following items: 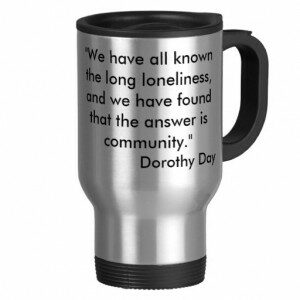 And unlike web searches on St. Luke the Evangelist or, say, Macrina the Younger, it is possible for a Celebrity 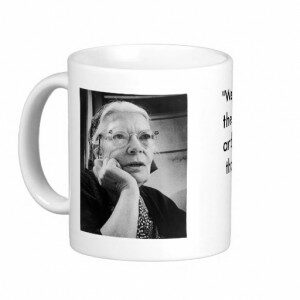 Blogger to land on the Jacksonville PD’s website and realize that in 2005 Dorothy Day, aged 56 -- after what must have been a bad night -- was arrested for domestic assault. Obviously not our Dorothy Day.

Day wrote, “My strength returns to me with my cup of coffee and the reading of the psalms.”

That brings us to the most ubiquitous of kitsch: the mug, both travel and ceramic, and its night-before cousin, the stein. 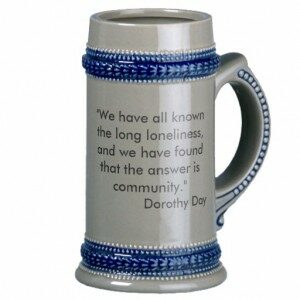 Then there is this deliciously funny mug. My boss, Bishop Steve Lane, has a terrific laugh and it’s fun to find ways to crack him up, which, verily, he did yesterday when I told him about this mug. 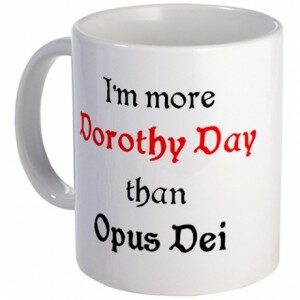 But always, always, we circle back to where we started. Back to truth and beauty and its beholder. One of the best finds of all is a mural of Dorothy Day painted by Amanda Webber at Luther Place Memorial Church in Washington, D.C. 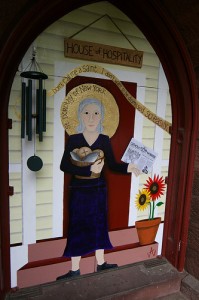 Other doorways at the church are arrayed with murals of St. Martin of Birmingham and St. Francis of Assisi. At the dedication of the Dorothy Day door in May 2011, Pastor Karen Brau said, “We celebrate today the gifts of Biblical hospitality lived out in the life of St. Dorothy Day of New York. A woman who came to her faith in adulthood, St. Dorothy took the words of Jesus so seriously that she sought ways to live out Jesus’ love for all people, particularly the most vulnerable — the poor.”

And the people said, “Amen.”

97 comments on “Luke the Evangelist vs. Dorothy Day”