Today's match-up is why Lent Madness can sometimes resemble the theater of the absurd. The Scriptural figure Joseph of Armimathea, who asked Pilate for Jesus' body in order to give him a proper burial, takes on Anna Cooper, African-American feminist, writer, and academic. The good news? Lent Madness returns after taking a sabbath on the First Sunday in Lent. 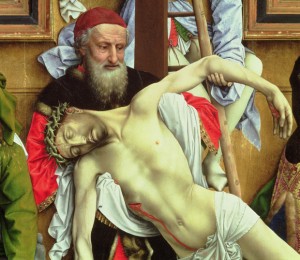 The patron saint of funeral directors, morticians, and undertakers, Joseph of Arimathea has a curious reputation. He appears in all four gospels, doing essentially the same thing: going to Pilate to ask for Jesus’ body in order to provide for his burial. Presented as a person of high status by each evangelist, his portrait shifts slightly in each version. He’s a kind of Rorschach test for a character we tend to think of as “not Jesus’ type:” a wealthy, well-connected religious leader.

In Matthew, he’s noted as a rich man and a disciple of Jesus. In Mark, he’s “a respected member of the council” who “went boldly to Pilate.” In Luke, he is “a good and righteous man,” a member of the council who had not agreed with the plan to kill Jesus. And in John, he’s a secret disciple for “fear of the Jews.” It’s like the synoptic gospels are saying, “Yeah, he’s on the council that killed Jesus, but he’s really a good guy, you know?” John can’t seem to get over his distaste.

John cannot deny, however, that after Jesus was abandoned at his crucifixion, Joseph showed up and went in person to the very man who executed Jesus and asked for the body. Handling the corpse would render Joseph ritually unclean for the Passover (Numbers 19:11-13).

Instead, Joseph fulfilled another law. Deuteronomy 21:22-24 says, “When someone is convicted of a crime punishable by death and is executed, and you hang him on a tree, his corpse must not remain all night upon the tree; you shall bury him that same day, for anyone hung on a tree is under God’s curse.”

Joseph is an interesting (and typically Jesus-like) case study about keeping the Law: is it more important to be clean and to take part in religious rituals or to show love and compassion to the least among us? Joseph’s choice shows he understood the essential truth of Jesus’ teaching.

After the burial, Joseph disappears from scripture. According to one legend, he brought the Holy Grail to England. In fact, Elizabeth I made use of Joseph’s supposed trip to support Anglicanism. After all, the Roman bishops “testifieth Joseph of Arimathea to be the first preacher of the word of God within our realms.” Therefore, the Roman Church couldn’t have been the first and only established church in England, could it?

Collect for Joseph of Arimathea
Merciful God, whose servant Joseph of Arimathaea with reverence and godly fear prepared the body of our Lord and Savior for burial, and laid it in his own tomb: Grant to us, your faithful people, grace and courage to love and serve Jesus with sincere devotion all the days of our life; through Jesus Christ our Lord, who lives and reigns with you and the Holy Spirit, one God, for ever and ever. Amen. 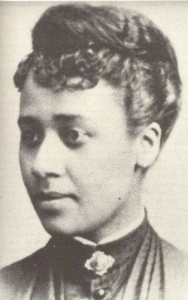 Anna Julia Haywood Cooper was one of the first feminists of the twentieth century and a tireless advocate for “neglected people,” in particular, African American women. Born in 1858 as the daughter of an enslaved African woman and a white man, likely her master, Anna transcended the limitations of slavery and the post-Civil War’s Reconstruction. She attended St. Augustine’s Normal & Technical Institute—now St. Augustine’s College—in Raleigh, North Carolina. She later studied at Oberlin College and graduated in 1884 with a bachelor’s degree and in 1887 with a master’s in mathematics. While at St. Augustine’s, Anna met and married her husband George Cooper, who was preparing for the priesthood. Although he died two years after they married, Cooper pressed forward with her education and career because of her desire to foster the full inclusion of black women in civic life.

Anna’s passionate belief in the power of education to transform lives led her to serve as a teacher and principal at M Street High School, the only all-black school in Washington, D.C. When her superintendent told Cooper that she should focus on teaching trades to her students instead of science, math, and literature, Cooper unabashedly defied his orders and continued with her original plans. As a result of her firm resolve, M Street’s graduates attended some of the nation’s most prestigious colleges and universities during a time when such opportunities were limited for women and people of color.

Cooper wrote A Voice from the South, in which she argued that black women had a unique voice about the experience of oppression and criticized educational, social, and civic advancements that only favored black men. At the heart of Cooper’s work was a firm belief in the potential of every human being. Never one to slow down, in 1915, Cooper adopted five children left orphaned, and in 1925, at the age of sixty-five she earned her doctorate in history from the University of Paris. Cooper died in 1964; she was 105 years old.

In 2009, the United States Postal Service issued a stamp in her honor. Pages 26-27 of all United States passports quote Anna Julia Haywood Cooper’s passionate beliefs about equality and freedom for all: “The cause of freedom is not the cause of a race or a sect, a party, or a class—it is the cause of humankind, the very birthright of humanity.” Thus it is possible to meditate on Lent Madness while waiting in slow-moving immigration lines when you return to the United States from vacationing elsewhere.

Collect for Anna Julia Haywood Cooper
Almighty God, you inspired your servant Anna Julia Haywood Cooper with the love of learning and the skill of teaching: Enlighten us more and more through the discipline of learning, and deepen our commitment to the education of all your children; through Jesus Christ our Lord, who lives and reigns with you and the Holy Spirit, one God, for ever and ever. Amen.

206 comments on “Joseph of Arimathea vs. Anna Cooper”