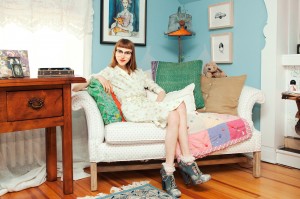 At Lent Madness HQ, as you know, we monitor the internet for Lent Madness action very carefully. Not long ago, we noticed that Julia Frakes — fashion writer, blogger, stylist and model — is a Lent Madness fan. You can read her stuff in lots of places, but her tumblr is a good spot with links to various magazine articles and more. She’s also active on Twitter as @bunnyBISOUS. Her bio can be found on her tumblr. She was kind enough to answer a few questions for the SEC. 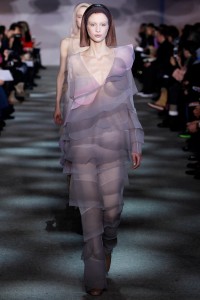 SEC: So you’ve written about fashion quite a bit. In our Faithful Four lineup, who is the fashion standout? What gives this saint the edge?
JF: As the first European convert to Christianity, I suppose it goes without saying that Saint Lydia of Thyatira, the seller of purple, reigns alongside the ultimate trendsetters glorified on the Episcopal Church’s Holy Women, Holy Men ranks–and arguably in the whole of theological history to boot #nobigdeal. Lydia’s adept business acumen enabled her epoch-altering philanthropy, church establishment, and good works: an economic security owing in no small measure to her stunning purple dyes—the color of passion and splendor, of regal and papal vestments, precious stones, and ornate prose (case in point).

In fact, it’s not a far stretch to imagine Marc Jacobs’ most recent lilac-strewn collection–backlit by a hazy purple catwalk set and crowned by legendary colorist Guido Palau’s custom-dyed “dusty violet” angular wigs in the style of Ancient Greece–as a runway tribute to Saint Lydia of Thyatira. Talk about a #trendsetter.

SEC: I suppose it’s a challenge to find an ensemble to work with the Golden Halo. What tips would you give the saint who wins Lent Madness 2014? 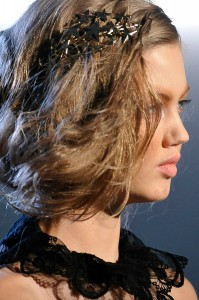 JF: I reckon we all could learn a life lesson or two–above and beyond the earthly realms of ensemble/halo-coordination–from Lupita Nyong’o’s breakout night at this year’s Academy Awards ceremony. Not only did she earn the Oscar for her standout performance in 12 Years a Slave, but she won the red carpet arrayed in a robin’s egg blue Prada gown and a diamond Fred Leighton halo. Further how-to tidbits to prepare for a potential Golden Halo bequeathing ceremony can certainly be gleaned from the innovative designer-sisters behind Rodarte, who recently crowned a collection with intergalactic, star-strewn halos (see here, here, and here). 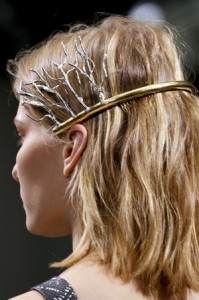 Golden Halo contenders can twig a tip from a recent Balenciaga collection presented by designer Nicolas Ghesquière (now at the helm of Louis Vuitton), whose gilded halos were an out-of-this-world hybrid of alien and arboreal aesthetics. Whether emulating Lupita, Rodarte, or Balenciaga, all halo-bearers could benefit from contemplating the Heavens for divine (outfit) inspiration.

SEC: You’ve done some modeling too, and I gather that personality is as important as anything else on the runway or in front of the camera. If our saints decide to start modeling their Golden Halo, what should they keep in mind? Who do you think would be best at this?
JF: Well, hymnwriter Charles Wesley no doubt has “the rhythm,” so to speak (sing?), but if Phillips Brooks could extend the venerable passion and record-setting pace of his preaching–a quick, spirited velocity emulated by the most stirring of orators (including Martin Luther King, Jr.!)–to a modeling endeavor, then he would no doubt test the shutter speeds and inventiveness of even famed fashion photographers.

SEC: Most of your @bunnybisous Twitter followers aren’t church geeks, but you’ve had a few things to say about Lent Madness. How can we all learn to share the Good News on social media?
JF: Between university courses and work, it’s been an honor lend a hand with my hometown @GraceChurch1921’s social media efforts–although it can admittedly become a bit confusing at times, as I also tweet on behalf of a few other organizations and magazines (and yes, many mistweets and various techy lessons have been learnt the hard way). As Episcopalians, we are so blessed to be members of a church acclaimed for its welcoming hospitality–a real world, in-the-flesh culture (emblazoned on our “The Episcopal Church Welcomes You” signs and manifest in our parishes’ all-embracing and nonjudgmental coffee culture)–that entreats all Episcopalians to attend to our intersectionality and celebrate our neighbors with open hearts. I feel like Saint Harriet Bedell is the personifies this tenet: Her empathy and identification with all those in her far-reaching ministry–from Alaska to Florida—where she was so deeply respected that The Cheyenne even adopted her into their tribe, giving her the name “Bird Woman.” I mean, talk about #trailcred. As betweeted by Dr. Meredith Gould’s groundbreaking and community-building #ChSocM initiative, every one of us is empowered to share the Good News in the so-called virtual sphere, with strikingly tangible and powerful effects.

I strive not to ignore the unique opportunities that “having a following” presents: if I can levy any limited clout, I must do so in considered advocacy for social justice. To effectively beget change by bridging liberal and radical feminist activist approaches and operating within and outside of institutional constructs strikes me as the most promising course of action: successfully integrating both legislative and social movement support—outside a given organization while ensuring ardent support from inside players—is crucial when, as in the effective justice movements for pay equity and affirmative action, either a threat is levied, resources are imperiled, or coercion is deployed. Within groups, engagement in social identity politics can mobilize stigmatized groups by providing the cathartic emotional work necessary to upturn shame, isolation, and fear into an outrage that provokes pride, mutual support, and urgency for action.

SEC: Any saints from current or previous years of Lent Madness that you really like?
JF: Oh yes! The divine wisdom of Saints Teresa of Avila, Thomas Merton, Dame Julian of Norwich, Ignatius of Loyola, Augustine, Jeanne d’Arc, and C.S. Lewis all continue to play a pivotal role in my own spiritual journey. On that note, if I may be so bold, may I cast my 2015 bracket ballot? Is the Supreme Executive Committee accepting nominations? / Well, I’d be remiss if I didn’t give a shout-out and submit the Saints Søren Kierkegaard, Thomas Aquinas, Pierre Teilhard de Chardin, Thurgood Marshall, Elizabeth Cady Stanton, Thomas à Kempis, Lord Shaftesbury, Ralph Adams Cram, and Albrecht Dürer for your most esteemed consideration of Lent Madness contendership.

SEC: Thanks for your time. Since you were kind enough to answer these questions, we’ll let you slide in these nominations early, despite the fact that everyone else has to wait until nominations are invited. Good luck with your studies!

Oh, and we can’t wait to hear your raves about the stylish fashions of the SEC’s black shirts with white collars.

9 Comments to "An Interview with Julia Frakes, Actual Celebrity Blogger"