It’s hard to believe but we are now officially halfway through the Round of the Saintly Sixteen. Four more battles and we’re on to the Elate Eight. But let’s not get ahead of ourselves just yet. To savor each day and immerse ourselves in the match-up at hand is part of the Lent Madness discipline. Speaking of which, we really do need to update the Ash Wednesday liturgy’s “Invitation to a Holy Lent” to read:

I invite you, therefore, in the name of the Church, to the observance of a holy Lent, by self-examination and repentance; by prayer, fasting, and self-denial; by reading and meditating on God’s holy Word; and by participating in Lent Madness.

But we digress. Today it’s the Biblical vs. the Mystical as Lydia takes on John of the Cross.

Yesterday Anna Cooper shocked the G-clef off J.S. Bach 54% to 46% to advance to the Elate Eight. She’ll face the winner of Thomas Merton vs. Charles Wesley. We also learned of the impending cross-marketing deal between McDonald’s and Lent Madness that perhaps fell under the “Fool for Christ” heading.

And finally, you may have been rudely roused from your dreams this morning by a story about Lent Madness on National Public Radio. We apologize. 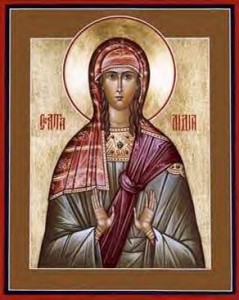 St. Lydia Thyatira appears only twice in the Biblical text, but her impact is much larger.

As the first European convert to Christianity, she was baptized by Paul right after he came to Philippi, and there, she started a church in her own household. Early church planter, that’s Lydia! She starts the community that will grow into the church at Philippi, and receive the famous letter from Paul.

This is a big deal, scholars opine, not only because it indicates that Lydia was clearly calling all the shots for her household, and established one of the first Christian communities in Europe, but also because of what it means for gender roles in the early church: men and women were called, men and women were baptized, and men and women led in ministry. And after his release from prison, Paul and Silas headed right back to Lydia’s house. It served as a de facto home base the entire time they were in Philippi.

It also indicates that Lydia, who had amassed quite a fortune as a dyer, had decided to dedicate her considerable financial resources to Paul and his work. This would be why she is now invoked as the patron saint of dyers, and all fabric workers, and a good thing, too. Obtaining the purple dye for which the city of Thytira was known required the patience of a saint all by itself.

Purple dye came from a particular secretion from the spiny dye-murex, a sort of carnivorous sea snail. (Yes, such a thing exists). You obtained it in one of two ways: either you ‘milked’ the sea snail and poked the thing until it spat purple goo at you, or you gathered a lot of them together and crushed them into a mass of purple goo. And even then, twelve thousand snails yields only enough dye for the hem of a single garment, which is why purple was reserved for the very rich, for emperors. (This is also why the Church adopted purple for the Lenten array — to emphasize the kingship of Christ. Sorry, snails).

To this day, no one has managed to recreate the special sort of Thyatiran purple exactly as it was back then. The exact recipe is lost to history. But Lydia’s legacy of leadership, ministry, and giving nothing less than her best to Christ endures. 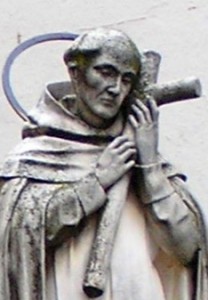 If you’ve ever endured debilitating periods of loneliness and despair in your life of faith, you have a loving companion in Saint John of the Cross. John of the Cross, a sixteenth-century Spanish mystic, wrote about such experiences in his popular and well-regarded books, The Ascent of Mount Carmel and The Dark Night of the Soul, both of which he wrote while being imprisoned by his fellow friars. John explained that the journey toward union with God necessitated detaching from self and the world. Noting that often times this process felt excruciating and ripe with loss, dejection, and uncertainty, John encouraged believers to remember that God had not abandoned them. As he said,

Faith is a dark night for man, but in this very way it gives him light…God sustains every soul and dwells in it substantially, even though it be that of the greatest sinner in the world, and this union is natural. The supernatural union exists when God’s will and the soul’s will are in conformity. Therefore the soul rests transformed in God through love.

Although John wrote most of his works in his mid-thirties, he had long been a person of deep compassion and faith. When he was 14, he served as a caregiver to hospital patients suffering from mental or terminal illnesses. Doing so helped him realize the richness of life with God and the futility of finding happiness in worldly possessions. For John, happiness was circumstantial, but joy was eternal and rooted in God’s love. He likened someone who settled for happiness alone to a “famished person who opens his mouth to satisfy himself with air.”

John’s works and humble life have influenced people for generations, including fellow Lent Madness competitor Thomas Merton, who wrote about John’s influence in his well-regarded Seven Story Mountain. John’s Dark Night also found voice in the work of T.S. Eliot, who expressed the sentiment of John’s works through poetry:

John’s life of love, poverty, and selflessness reminds us of the joy of seeking Christ and the eternal love of God that always enfolds us –- no matter what we feel or endure.