In the last battle before the start of the highly anticipated Elate Eight (aka the Saintly Kitsch round), Thomas Merton takes on Charles Wesley. Poet vs. hymn writer. Both were brothers, of course — one a monastic brother (Trappist) and one an actual brother (to John Wesley). It’s the final match-up of the Saintly Sixteen!

In a quick media round-up, everyone’s favorite online Lenten devotion was featured last week on National Public Radio, Christianity Today, and even the Methodists got in on the action with a post on UMC.org, the official online ministry of the Methodist Church (something tells us they may be especially interested in today’s match-up). Also, Archbishops John and Thomas made their national television debut on Bloomberg TV.

What’s the secret behind all the Lent Madness love out there (besides the warm and fuzzy nature of the Supreme Executive Committee)? Forward Movement Managing Editor Richelle Thompson shares her take in an article titled “If At First You Don’t Succeed” on the Episcopal Church Foundation’s Vital Practices webpage (Hint: no high priced PR consultants were harmed in this process).

And if you’re looking to take the edge off Monday Morning, watch the Archbishops’ Update as they preview the Lent Madness week ahead.

Finally, we’re making progress in our campaign to reach 10,000 likes on Facebook before awarding the Golden Halo! We’re pushing 9,650 so make sure to share our page with everyone you know. We suggest pilfering the parish directory and sending handwritten notes to everybody urging them to like Lent Madness immediately.

Thomas Merton is considered by many to be the voice of the contemplative tradition in the modern world. His books, over 30 of them, reinvigorated those interested in contemplative practice. Given his voluminous amount of writing, his quotes were more than plentiful.

The quirks, however, are what make his quotes matter. Perhaps the quirk was his life of self contradictions. An unhappy child and unsettled adolescent became an adult who, on a street corner in Kentucky, was overwhelmed with the realization he loved all these people, “that they were mine and I theirs, that we could not be alien to one another even though we were total strangers.”

A man with an extravagant personality and celebrity also craved his own space, eventually granted, somewhat grudgingly, in The Hermitage. A deeply devout Trappist who described his order as one that “carried communism to its ultimate limit” also explored the truths in Eastern faith. A sometimes hermit shared his soul and spirit with millions through his words. A man who, in his later years, fell in love with a nurse, writing her love poetry, wrote love poetry to his monastic life, as well, and ultimately reaffirmed his life as a Trappist before his untimely death. Even that too held contradictions: the avid peace activist’s body was flown to Kentucky on a military plane.

Merton was a writer, a poet, an artist, a jazz aficionado, a dissident, a lover, a peace activist, a hermit, a celebrity, and a man — all held in union in his deeply contemplative soul. The illusion is that we are non-contradictory. To find our true selves, filled with beauty and contradictions and other-ness, we must enter into contemplation. For Merton, “We become contemplatives when God discovers Himself in us.”

Through contemplation, we seek truth. Merton writes, “We make ourselves real by telling the truth….But he can forget how badly he needs to tell the truth….We must be true inside, true to ourselves, before we can know a truth that is outside us.”

And that truth? That self that is beyond illusion, that welcomes our contradictions, our paradoxes and ambiguities? In that space is God.

The man who is not afraid to admit everything that he sees to be wrong with himself, and yet recognizes that he may be the object of God’s love precisely because of his shortcomings, can be sincere. His sincerity is based on confidence, not in his illusions about himself, but in the endless, unfailing mercy of God.

When all our shortcomings, our hypocrisies, our failings…when all that we’d rather not expose about ourselves is welcomed into contemplative union with God, we become part of the dance that is in the midst of us, “for it beats in our very blood whether we want it to or not.”

In the midst of Lent Madness, remember Merton’s call to cast our awful solemnity to the winds and join God’s dance.

Here is a video of a monk from Gethsemani praying one of Merton’s most famous prayers: 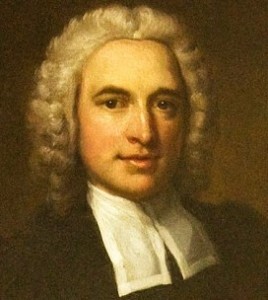 Charles Wesley (1707-1788), who with his brother John was among the chief leaders of the Methodist Revival within the Church of England, is especially quotable, having penned well over 6,000 hymns during his lifetime, in addition to a multitude of sermons a personal writings. Wesley knew well the power of hymns to convey theology to a wide audience.

One of Wesley’s great hymns was written on the anniversary of his inner conversion, which he described as “a strange palpitation of the heart.” The hymn spanned some eighteen verses, including some no longer in common use today, speaking to the theme of the assurance of salvation by the presence of the Holy Spirit:

O for a thousand tongues to sing, my great Redeemer’s praise
The glories of my God and King, the triumphs of His grace!

On this glad day the glorious Sun Of Righteousness arose;
On my benighted soul He shone, and fill’d it with repose.

Then with my heart I first believed, Believed with faith Divine;
Power with the Holy Ghost received, to call the Saviour mine.

Some of Wesley’s hymns weren’t as “worship-ready.” After his brother John appointed Thomas Coke as Superintendent for the Methodists in America – giving to Coke the responsibilities in America that would have belonged to a Bishop in the Church of England – Charles Wesley penned a sarcastic verse to express his sense of anger and betrayal:

So easily are Bishops made
By man’s or woman’s whim?
Wesley his hands on Coke hath laid,
But who laid hands on him?

But the vast majority of his hymns, however, remain firmly entrenched on our lips. As a man who often preached in the fields to people unable to reach a parish church, yet another text speaks to the heart of Charles Wesley’s ministry:

Ye servants of God, your Master proclaim,
And publish abroad His wonderful Name;
The Name all victorious of Jesus extol,
His kingdom is glorious and rules over all.

But it is one of his hymns written on the theme of Christian perfection that is perhaps the most beloved. The hymn is among the most fitting and most quotable summations of the theology and ministry of this incredible theologian, preacher, and author:

Love divine, all loves excelling,
Joy of heaven to earth come down;
Fix in us thy humble dwelling;
All thy faithful mercies crown!
Jesus, Thou art all compassion,
Pure unbounded love Thou art;
Visit us with Thy salvation;
Enter every trembling heart.

Come, Almighty to deliver,
Let us all Thy life receive;
Suddenly return and never,
Never more Thy temples leave.
Thee we would be always blessing,
Serve Thee as Thy hosts above,
Pray and praise Thee without ceasing,
Glory in Thy perfect love.

Finish then thy new creation:
pure and spotless let us be
Let us see thy great salvation
Perfectly restored in thee
Changed from glory into glory
‘til in heaven we take our place
‘til we cast our crowns before thee,
lost in wonder, love and praise!

NOTE: The Supreme Executive Committee has adjusted vote totals based on some cheating we detected. See your announcement on this subject..