Brigid of Kildare vs. Egeria

Well, one thing is for sure in this round. Celebrity Blogger extraordinaire Megan Castellan will have a saint vying for the Golden Halo tomorrow. Yes, Megan is advocating for both Brigid of Kildare and Egeria, as she has throughout Lent Madness 2015. The real mystery is how she will trash talk herself!

The winner of today's battle will face Francis of Assisi for the Golden Halo tomorrow on Spy Wednesday. Francis trounced Molly Brant, one of the true cinderallas of this year's bracket, 71% to 29%.

To get to the Faithful Four, Brigid defeated Elizabeth, Dionysius the Great, and Kamehameha while Egeria beat Hildegard, Thomas Ken, and Frederick Douglass (click on the names of the vanquished foes to refresh your memory about the information shared about Brigid and Egeria in previous rounds).

Oh, and does voting for saints feel somehow at odds with the solemnity of Holy Week? Click to read Scott's contribution to the blog of St. Luke in the Fields in New York City, in a post titled Lent Madness: Holy Competition in Holy Week? Spoiler Alert: He thinks it makes perfect sense. 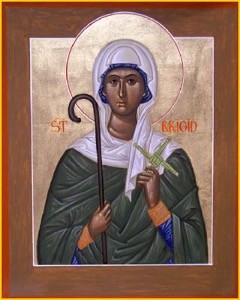 I fear I must trouble you with a story.

I was ordained to the diaconate on February 1. I learned that it was St. Brigid’s day when I was filling out the form for my ordination certificate, but I didn’t think much of this — merely that she sounded Irish or something, which might please my grandmother.

During the service, several things went awry. Not so badly as to spoil the day (it was glorious) but just as to be disorienting. So when it came time for the bishop to lay hands on our heads, I guess he was a mite flustered. He put his hands on my head (I came first, alphabetically), and said the prayer of ordination, ending with “By the power vested in me, I now ordain you a bishop….
no, wait….
a priest…..
no, wait….
Look, I’m just going to start all over again.”

Everyone got a good chuckle, and he took a breath and finally ordained me to the correct order of ministry. Thank the good Lord.

Afterwards, at the reception, my presenting priest commented to me that this was a really appropriate occurrence for Brigid’s day. I looked at her blankly, and she smiled, and told me to do some research.

Sure enough, I discovered that Brigid has much to commend her, even besides her penchant for microbrewing before it was popular. Her leadership, her wisdom, her generosity, her tenacity in what she knew was right (she marched across Ireland and back!) are rare and valuable indeed. And even if you are dismissive of ancient tales of columns of heavenly fire, or bathtubs that transform into beer, recall this: Brigid loved the people in her charge such that she made sure they never went hungry or thirsty. She gave away all she had for their sakes. And they saw in her wisdom and courage that could lead them safely.

Brigid — with or without miracle tales — lit the light of Christ in Ireland through her words, presence, and actions.

What better saint could you ask for? Vote Brigid! 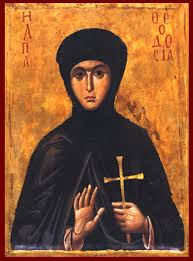 Holy Week, as observed through liturgy, changes a person. From the shouting, singing frenzy of Palm Sunday, to the poignant movements of Maundy Thursday, and the descent into the darkness, to the bleak desolation of Good Friday, to the expectant waiting and watching of the Vigil, which finally explodes into sunlight and the joy of Easter. One week captures all human emotion and wraps it in prayer.

Jerusalem, too, changes a person. There is a saying you hear when you visit on pilgrimage: “Go to Jerusalem for a week, you write a novel. Stay for two -- you cannot write even a sentence.” It’s a comment on the difficulties of conveying the depth of the experience, the complexities of people, the intensity of faith in this place. The heat of Jerusalem dries up your words.

When she went on pilgrimage, she wasn’t content with a surface view of the things she saw. She asked questions, she took notes, she recorded everything, she sent her observations back home so everyone there could share her joy. She got to know the people around her, and described them with respect and dignity. She told the rest of the church what Holy Week liturgy looked like, in the place where it all began.

Egeria shows us what curiosity looks like, sure. But had she merely been a fourth-century busybody, I doubt her legacy would have lasted. Instead, what Egeria shows in her writing is respect and love for the different people and practices she encountered. It is that love which moved her to learn so much about rituals and customs different from her own and it was love that compelled her to convey the dance of the early liturgies so clearly to her sisters back home.

164 comments on “Brigid of Kildare vs. Egeria”