The moment we’ve all been waiting for has finally arrived: Lent Madness 2016 kicks off RIGHT NOW! For those who thought “Ash Thursday” would, like a desert oasis, never arrive, your penitential dreams have come true.

In any case, we’re delighted to welcome you to this year’s Saintly Smackdown with a First Round battle between Helena and Monnica. Or as we like to call it, the Matronly Meltdown®, as we open with two famous mothers doing battle (of course motherhood isn’t either one’s full claim to fame, so read on).

If you’re new to Lent Madness, welcome! You may want to check out our recent Voting 101 post which includes a step-by-step how to vote video. You can also read through the Lent Madness Glossary which highlights all sorts of phrases and terms you’ll encounter along this unique Lenten journey.

Be sure to sign up for e-mail updates on our home page so you never miss a vote, like us on Facebook, follow us on Twitter, and encourage your friends to jump into the fray. While you are on our Facebook page today, please “Check In” to Lent Madness so all your friends will know you have gone to Lent Madness.

We can assure you this will be a wild, joyful, educational, ocassionally gut-wrenching ride. Let the Madness begin! 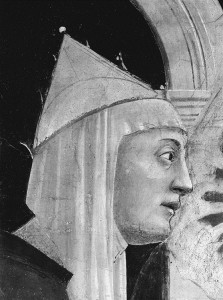 During her long life, Helena gathered the most-sought-after relics in Christian history, including splinters of what is known as the True Cross.

Helena was born around 246 CE, somewhere in Asia Minor—most likely the city of Drepanum. She grew up as a stable maid, but her fortunes changed radically when she met the emperor, fell in love with him, was whisked away to Rome, and gave birth to Constantine in 272 CE.

This was not the end of Helena. Constantine became the Roman emperor by winning the Battle of Milvian Bridge in 313 CE, after being told in a vision that if he and his troops marked their shields with the Greek letters Chi and Rho—the first two letters of Christ, the battle would belong to them. Depending on the source, Constantine and his mother converted promptly after this victory was secured.

Upon being recognized as the emperor of Rome, Constantine sent Helena on an official mission: travel to Palestine to bring back relics of Jesus and the Apostles and to do whatever good she felt necessary in the name of Christ. To accomplish this, he put the entire imperial treasury at her disposal.

Helena (who was at the very least every day of seventy-five-years-old) set out with gusto and built the Church of the Nativity in Bethlehem as well as the Church of the Ascension on the Mount of Olives. She tore down the Roman temple that had been constructed on the site of Jesus’ crucifixion and gave orders for the construction of the Church of the Holy Sepulchre. She unearthed fragments of wood that she believed to be the True Cross as well as the nails that were used on Jesus’ hands and feet and carried them with her back to Rome.

In all, she built over eighty churches in the Holy Land, including Saint Catherine’s Monastery at the foot of Mount Sinai. Helena also preserved for generations the history of the Holy Land and the early faith of the Church. And she did it all in the second act of her life.

Collect for Helena
Almighty God, you caused Helena of Constantinople to seek the cross of Christ with energy and devotion; Grant that through her example we may be inspired to seek your face and bear your cross for the sake of your love, through Jesus Christ our Lord. Amen. 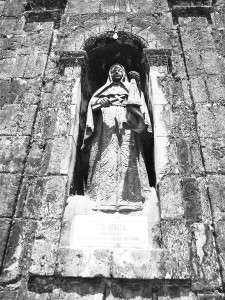 Monnica, a model of the praying mother and wife, was the mother of Augustine—the father of Western Christian thought. Married to a pagan bureaucrat named Patricius, who would later convert to Christianity under her influence, Monnica was mother to several children; Augustine was the eldest. After her husband’s death, Monnica made fierce and tireless efforts to secure Augustine’s conversion, even going so far as to push the local bishop to track Augustine down and argue with him.

By the time he was twenty-nine, Augustine decided to journey to Rome to teach rhetoric. Monnica, while opposed to the plan, persisted in going with him. By fits and tricks, Augustine managed to embark for Rome, leaving his bereft mother behind. Yet Monnica could not be deterred, and she sailed for Rome, only to find him in Milan. In 386, she witnessed the event for which she longed: Augustine’s full acceptance of catholic Christianity, followed a year later by his baptism. Monnica had persisted, prayed, and worked nearly two decades to see Augustine’s conversion.

Monnica died in the port of Ostia, and when asked if she wished for her remains to be carried home, she replied, “Nothing is far from God; neither am I afraid God will not find me.” Her conviction that nothing is far from God has earned her devotion to this day. Monnica is the patron saint of married women and mothers and those battling alcohol addiction.

Collect for Monnica
O Lord, through spiritual discipline you strengthened your servant Monnica to persevere in offering her love and prayers and tears for the conversion of her husband and of Augustine their son: Deepen our devotion, we pray, and use us in accordance with your will to bring others, even our own kindred, to acknowledge Jesus Christ as Savior and Lord; who with you and the Holy Spirit lives and reigns, one God, forever and ever. Amen.