Where else can you find the winner of the 1952 Nobel Peace Prize locked in battle with a 14th century mystic? We’re guessing nowhere. Like, literally nowhere ever. In the history of ever. But here at Lent Madness, today finds Albert Schweitzer pitted against Julian of Norwich with a trip to the Faithful Four hanging in the balance.

Albert made it this far by defeating Lawrence and Methodius while Julian bested William Wilberforce and Roch. Again, if you’re looking for information from the previous rounds, click the Bracket tab and scroll down.

Yesterday Sojourner Truth advanced to the Faithful Four by getting past Absalom Jones 64% to 34%. She’ll face the winner of Columba vs. Dietrich Bonhoeffer.

But the big news involved the Lent Madness 2016 feel good story of the year as Oliver won the Mug Shot contest. You can read all about it here and check out Tim and Scott’s favorite images of the many that were submitted. 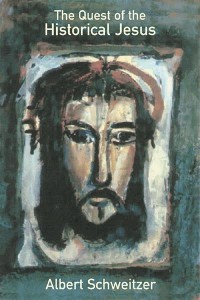 When one enters the hallowed Saintly Kitsch Round for the first time it is an overwhelming experience. The rich history of this time honored tradition is not to be trifled with. How does one do justice to the saint and their tchotchkes?

One can begin with the low hanging fruit. Like the saint’s book that shaped historical Jesus scholarship for a century. Sure the title is boring but the cover of the second edition is kinda nifty.

There is also the solidly B movie that tells his story – Albert Schwietzer: Ein Leben für Afrika. Because, you know, Africa is a country. 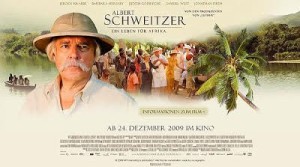 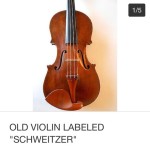 But after this low hanging fruit things get tricky. First stop, Ebay. After a quick search of “Schweitzer” one finds this lovely “Old Violin Labeled Schweitzer.” Schweitzer loved music. This works.

Actually, it doesn’t. Nothing on Ebay works. Ebay is the worst. Time to fire up the 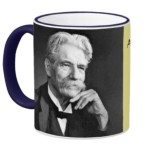 Googles. “Schweitzer kitsch.” No dice. “Schweitzer shwag.” Nein. Apparently one must direct their searches a bit.

“Schweitzer mug.” BINGO! Sip your favorite morning bevvy with Albert’s mug on your mug! I’m not gonna lie, though. I’m not sure how I feel about my lips being so close to that burly ‘stache. Seriously, it scares me. Who knows what lives in there. 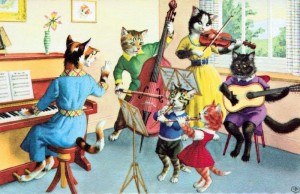 While blindly Googling for Schweitzer mugs and t-shirts I kept running across mugs and shirts with cats on them. And I began to wonder, is Schweitzer German for cat or something? It turns out one of his more famous quotes reads, “There are two means of refuge from the miseries of life: m 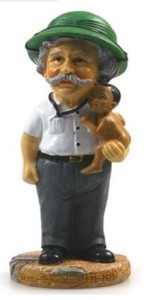 usic and cats.” So here you go, those who need refuge from the miseries of life (I’m looking at you, Roch) – some cats playing music.

But that’s not really Schweitzer schwag. But this is! I present without comment (you have no idea how hard this is for me).

Save the best for last, or something like that. This came up while Googling 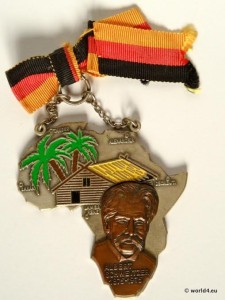 “Schweitzer keychain” (is there nothing kitschier that a keychain?). The description of the item was “memorial plaque.” Looks to me like a keychain. I like how Schweitzer takes up ALL of southern Africa and the building takes up the rest. Because, you know, Africa is a country. Also the German flag ribbon really ties it together nicely. It does not ring of colonialism at all.

So there you have it. Kitsch worthy of Schweitzer’s mustache. 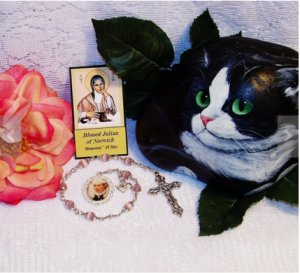 Julian of Norwich is not exactly the queen of kitsch. The austere life of a medieval anchoress doesn’t really lend itself to tchotchkes.

However, there are lovely icons depicting her, as well as many modern paintings that tend to capture her with her cat, as can be seen in this collage of Julian related items on Etsy. 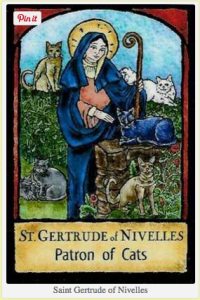 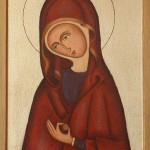 More often, Julian is depicted holding a hazelnut, representing her divine vision that the whole of creation is so tiny to God, and yet sustained by God’s love.

Personally, I would like to see her honored on this prestigious product label: 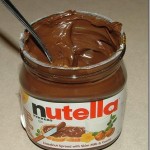 Occasionally, one can find an image with both a hazelnut and a cat, as
in this handmade statue of Julian, also found on Etsy. And in this painting from the previous home of the Order of Julian of Noriwich, Julian House Monastery, courtesy of Marguerite, @The_Parishioner , who is affiliated with that order. 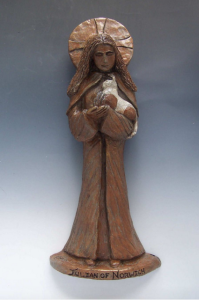 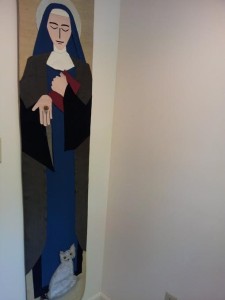 Ultimately, however, Julian’s legacy is in her words, rather than her image. In 1981 Sydney Carter of “Lord of the Dance” fame wrote the song “Julian of Norwich” (sometimes called “The Bells of Norwich”) based on her words. 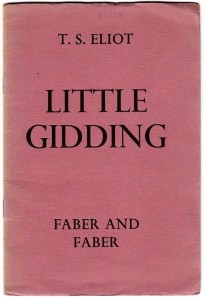 And Internet searches for tasteless art inspired by Julian were ultimately unsatisfying, because instead there are rather a lot of tasteful posters and mugs with her quotes. And I promise, I get no commission from Etsy if you go right there and purchase some inspirational artwork! 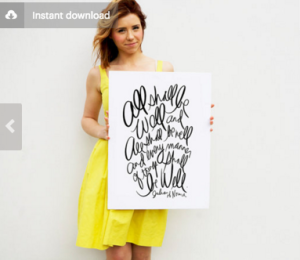 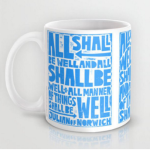 Indeed, what better than a cup of coffee to help you have faith and hope in Christ’s promise to Julian that all manner of things shall be well?

158 Comments to "Albert Schweitzer vs. Julian of Norwich"