Okay, he's not technically a Celebrity Blogger (though he once was!). But as Bracket Czar, Adam Thomas is an integral member of the Lent Madness team. He's the one who not only makes the bracket pretty -- you should have seen it the first two years when Tim hosted the whole thing on his blog -- but also keeps it updated electronically throughout the season. We're extremely grateful for Adam's diligence and you should be too! 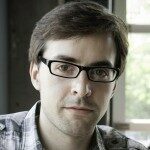 The Rev. Adam Thomas, Distinguished Lent Madness Bracket Czar, had one stint as a celebrity blogger, in which his Cinderella story Philander Chase made it way farther than the analysts expected. Since 2012, he has been the keeper of the bracket and writer of pithy headlines on the bracket page. This Lent is his third as rector of St. Mark’s Episcopal Church in Mystic, Connecticut. Adam is the author of Digital Disciple: Real Christianity in the Virtual World (Abingdon 2011), which you should read since you are using the Internet right now and you are more than likely a Christian. His first novel Letters from Ruby, which is about an Episcopal priest (imagine that!) arrived in August 2013 and a video Bible study series Unusual Gospel for Unusual People followed in spring 2014. A passionate gamer, Adam just launched a new website about board games called Human Cleric Games. Adam lives in Mystic, Connecticut with his wife Leah and their beautiful and precocious twins. Check out his website WheretheWind.com, for nearly eight years of content. You can fan Adam on Facebook or follow him on Twitter @RevAdamThomas.

1. What is the single most inspirational place you have ever visited (besides your own church).
I spent 36 hours in Haiti in December 2015 meeting with teachers, administrators, and students of a school that my church partners with in mission. I have never felt more inspired than hearing the passion of the teachers, who work in tough conditions to educate the children. I returned to the states renewed, chastened, hopeful, and excited to participate in God's mission.

2. Share one unusual fact about yourself with the Lent Madness public.
Here are three facts. One of them is an alternative fact. You decide which.
(a) Early in our courtship, I wrote my wife an email in Jane Austen style prose.
(b) I run a Dungeons and Dragons game that has produced at least one member of my vestry. 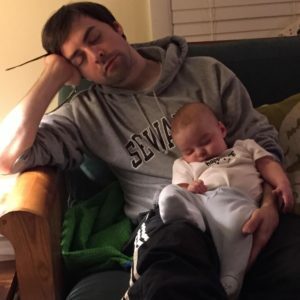 (c) In high school, I was the backup quarterback my junior year and when the star senior QB was paralyzed in a freak football injury, I led the team to an unlikely state championship that same season.

3. Of the saints you've written about for Lent Madness 2017, what most inspires you? What most disturbs you?
As the Bracket Czar I'm retired from the drudgery of writing the bios. I have other drudgery now. I do find it fascinating how often the Biblical saints get ousted in early rounds (with Mary Magdalene the notable exception). I think it has to do with the fact that we know more about modern saints, and the Biblical ones' bios are more legendary than historical (and we have few direct quotations from them).

4. If you could get just one tattoo this Lent, what would it be? (besides the Lent Madness logo and "none" is not an option).
The Trinity stained glass window at my church St. Mark's would make a great tattoo. I've been contemplating it for a while now.