Welcome to Celebrity Blogger Week! A long-standing Lent Madness tradition, we spend the days leading up to everyone’s favorite online Lenten devotion by introducing you to the fabulous writers who will make the 32 saints of Lent Madness 2017 come alive (well, they’re already alive, theologically speaking, but you know what we mean).

We’ve asked all of our Celebrity Bloggers to answer a few questions and provide a photo that reflects something non-churchy that they’re passionate about. The Supreme Executive Committee will be posting these intros in the order we receive them. Because we’re all about fairness. Also, so you can see who the slackers are.

As the pre-Lent Madness frenzy ratchets up, we hope you’ll enjoy spending some time with the men and women who will bring you Lent Madness 2017. We think they’re all pretty amazing and not just because they essentially work for free mugs.

In preparation for Ash Thursday (March 2), make sure to order your copy of the Saintly Scorecard: The Definitive Guide to Lent Madness 2017 (while supplies last!) and perhaps you’d like a large Bracket Poster to post at church. Or in your kitchen. 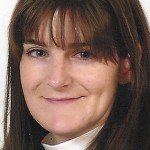 The Rev. Megan Castellan, Distinguished Celebrity Blogger, is Assistant Rector at St. Paul’s Episcopal Church, Kansas City, Missouri, and diocesan youth coordinator for the Metro Kansas City area. Previously, she has lived and worked in Virginia, Pennsylvania, New York, Arizona, and that period of time in the West Bank that the government can’t know about. Her ongoing adventures and strong opinions are chronicled in her blog Red Shoes, Funny Shirt and on Twitter @revlucymeg. (From time to time, you can also catch her writing in various other places, like House of Deputies News, Episcopal Café, or Fidelia’s Sisters, though the snark factor is significantly lower there). In her spare time, she enjoys singing, playing with yarn, throwing jellybeans at politicians she disagrees with on TV, and cheering on KC-based sportsball teams.

1. What is the single most inspirational place you have ever visited (besides your own church).
I was blessed to live for 2 months in East Jerusalem while I was in college, and it changed my life. Among other experiences, I got to go to the Church of the Holy Sepulcher two and three times a week and explore. If you wander down into the basement, underneath the tomb itself, you can see evidence of an earthquake that split the stones upon which the church was built, and thousands upon thousands of tiny crosses carved into the rock by pilgrims who came to this place before. It’s awe-inspiring and humbling.

2. Share one unusual fact about yourself with the Lent Madness public.
I am a devout knitter. No lie. I have knit, in no particular order: socks, scarves, shawls, sweaters, hats, toys, bags, and numerous objects of art, as a weird form of stress relief. My favorite recent knitting projects were some tea cozies I discovered from a designer in New Zealand who made knit tea cozies shaped like an enormous 3D daffodil, a fluffy rooster, and a bouquet of roses. Really, who doesn’t want their tea pot to rese 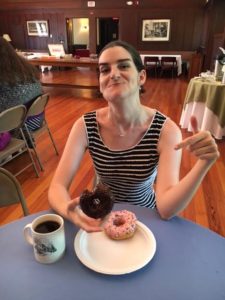 mble a knit rooster?! (This is what I’m talking about).

3. Of the saints you’ve written about for Lent Madness 2017, what most inspires you? What most disturbs you?
No question—Sam Schereschewsky is my favorite this year. This guy knew more languages than you could shake a stick and thought so highly of the people he traveled to serve that he translated the Bible for them….WITH ONE FINGER. That is super-hero level saintly stuff.

The most disturbing is probably Raymond Nonnatus, who (despite the Call the Midwife connection) had a really upsetting beginning. He was sliced out of his dead mother’s womb via sword, thus his name “nonnatus”, or ‘not born’ because the ancients didn’t consider C-section via sword a valid birth. Probably his mom would disagree. Ow.

4. If you could get just one tattoo this Lent, what would it be? (besides the Lent Madness logo and “none” is not an option).
St. Brigid’s cross! I’m not really a tattoo person (too indecisive) but I would get Brigid’s cross—both in honor of my ordination on her feast day, and in honor of her dedication and fire.