Today in Lent Madness, we will finally answer that age old question: Theologian or Nurse? Okay, there’s a lot more to Anselm of Canterbury and Florence Nightingale than these two labels, so you’ll just have to read on.

In yesterday’s action, Henry Budd left Cecilia singing the blues as the patron saint of music lost in a close battle 53% to 47%.

Shockingly (or not so shockingly if you’re a longtime Lent Madness participant), we encountered our first case of voter fraud as 546 votes for Cecilia were removed after the ever-vigilant SEC noticed a discrepancy. It was a youthful prank and said youth has since confessed and been absolved. Frankly, there are worse ways for teens to get into trouble on the internet than voting too many times for a saint in Lent Madness.

However, this will not be tolerated and perpetrators face being cast into the outer darkness of Lent Madness where there will be weeping and gnashing of brackets. Do everyone a favor: vote once. If you’re particularly enthusiastic, get all your friends, neighbors, and even your enemies (the ones we’re supposed to love anyway) to cast a vote for your favorite saint. Big Lent is watching… 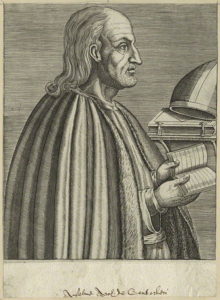 Anselm of Canterbury was a Benedictine monk and theologian of the medieval Church. Born in the eleventh century in a region of France that is now part of Italy, he entered the Abbey of Bec as a novice at the age of 27. Later, he became abbot and was known for his skillful leadership and his kind, loving discipline toward the monks. He was also known for his very public squabbles with the monarchs of England during his time as the Archbishop of Canterbury, defending the Church’s authority to appoint leaders and manage its own wealth. For his resistance to the English kings, he was exiled twice.

Marrying his Neoplatonic worldview with Aristotelian logic, Anselm is considered one of the greatest thinkers of the Middle Ages. He espoused a philosophy of “faith seeking understanding,” by which he meant people’s love of God inspired them to pursue deeper knowledge of God. Anselm is especially known for two highly influential theological arguments. The first argument—Proslogion—explores the existence of God. Secondly, his treatise Cur Deus Homo irrevocably shaped the development of Christian theology by arguing that Jesus’ crucifixion was necessary to atone for humankind’s sin. Anselm argues that through sin, humans offended God, and God is owed restitution for this offense—but we have nothing with which to make such a payment. Personal acts of atonement will not suffice. Only God can pay off such massive, crushing debt. As God is merciful, atonement is made with the self-sacrifice of the sinless, human, and divine figure of Jesus. Anselm’s theory was criticized by his contemporaries and continues to trouble some theologians, even as it has formed the backbone of much of Christian
theology for a millennium.

Anselm died in 1109 on Spy Wednesday (the Wednesday in Holy Week) and was laid to rest at Canterbury Cathedral. The exact location of his relics today is uncertain—they were removed after a cataclysmic fire in the 1170s. Anselm’s feast day is April 21.

Collect for Anselm of Canterbury
Almighty God, you raised up your servant Anselm to teach the Church of his day to understand its faith in your eternal Being, perfect justice, and saving mercy: Provide your Church in every age with devout and learned scholars and teachers, that we may be able to give a reason for the hope that is in us; through Jesus Christ our Lord, who lives and reigns with you and the Holy Spirit, one God, for ever and ever. Amen. 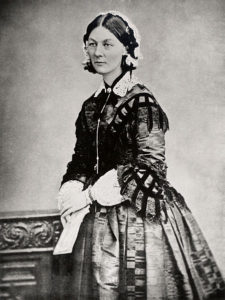 Known as “The Lady with the Lamp” for her work as a nurse during the Crimean War, Florence Nightingale was born in Florence, Italy, in 1820 to a well-connected British family. Despite her upper-class background, Nightingale heard a call from God in 1837 to serve and care for others. Nightingale was expected to marry well, produce children, and carry on the family legacy. Instead, she boldly answered the call she heard from God and became the founder of modern nursing practice.

Born out of her experiences of tending the wounded during the Crimean War, Nightingale began documenting the effects of sanitary conditions on wartime injuries. Nightingale is said to have reduced the mortality rate during the war from 42 percent to 2 percent by addressing hand washing, water contamination, and sterilization of surgical materials. These ideals of sanitary care continue to this day in modern healthcare practice.

Nightingale documented her theories on nursing care in numerous publications—the most famous is her treatise, Notes on Nursing. These theories led her to establish the Nightingale School for Nurses at St. Thomas’s Hospital in London (now part of King’s College, London). This began a process of social reform that opened the door for women, providing them with skills that led to careers outside of domestic service work or factory positions. By providing a skilled nursing force, Nightingale improved healthcare disparities in London and implemented workforce healthcare (now occupational and public health nursing practice); she also advocated for hunger relief in India and worked to abolish prostitution laws that targeted women.

Nightingale was raised in the Church of England and was greatly influenced by Wesleyan ideals. Nightingale believed that her faith was best expressed through the care and love of others. A believer in universal reconciliation, Nightingale is said to have comforted one prostitute who was concerned about going to hell. Nightingale said, “Oh, my girl, are you not now more merciful than the God you think you are going to? Yet the real God is far more merciful than any human creature ever was or can ever imagine.”

Collect for Florence Nightingale
Life-giving God, you alone have power over life and death, over health and sickness: Give power, wisdom, and gentleness to those who follow the lead of your servant Florence Nightingale, that they, bearing with them your presence, may not only heal but bless, and shine as lanterns of hope in the darkest hours of pain and fear; through Jesus Christ, the healer of body and soul, who lives and reigns with you and the Holy Spirit, one God, now and for ever. Amen.

337 Comments to "Anselm of Canterbury vs. Florence Nightingale"