Only in Lent Madness will you find a 19th century pioneering bishop squaring off against a 12th century monk. Which, you guessed it, is precisely what we have today as Henry Beard Delany faces Aelred of Rievaulx in the second matchup of Lent Madness 2017.

In yesterday's "Ash Thursday" kickoff, Stephen soundly defeated Alban, 62% to 38% in heavy voting. Indeed, with over 9,600 total votes cast a new Lent Madness turnout record was set! We also love that over 450 people added comments to the post. With his victory, Stephen became the first saint to advance to the Round of the Saintly Sixteen, where he'll face the winner of Henry Budd vs. Cecilia. Somewhere Bob Dylan is singing, "Everybody must get stoned."

Still wondering how to keep up with all the saints? You need a Saintly Scorecard 2017! While the paper book has passed into the realm of collectors' items, the ebook is available. Pick one up for your Kindle or iPad today! For only $2.99 you'll have the inside track on all things Lent Madness!

Finally, in case you've ever been kept up at night wondering about the inner workings of the Supreme Executive Committee, you're in luck! Tim and Scott recently appeared on the popular Priest Pulse podcast. In addition to discussing all things Lent Madness, they even touch on the roots of their longstanding feud. Enjoy! 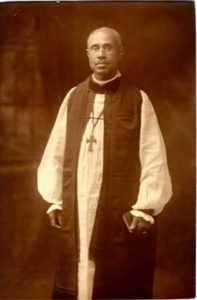 Born a slave into a Methodist household in Georgia, Henry Beard Delany was freed at the end of the Civil War. As a teenager, Delany moved to Florida with his family, where he learned bricklaying and carpentry. Delany received a scholarship from a local Episcopal parish to attend St. Augustine’s College in Raleigh, North Carolina—a college founded by Episcopal clergy to educate emancipated African-Americans.

Delany studied music and theology, joining the faculty after graduation and teaching building trades. Together, he and his students built the chapel, library, and hospital for the college. He attended an Episcopal church and was ordained a deacon in 1889 and priest in 1892. Upon his ordination, Delany became the vice-principal of the college. His wife Nanny Logan, also an alumna of St. Augustine’s, taught and served as matron at the college. They had ten children, including noted authors Sadie and Bessie Delany. During the later part of the nineteenth and early part of the twentieth century, the southern dioceses of the Episcopal Church were wrestling with the status of African-Americans within the church. While there were historic African-American congregations—like St. Ambrose where Delany was nurtured and ordained—they were routinely refused full parish status due to fears that a sizeable block of African-American delegates to diocesan conventions might upset the status quo.

Delany was part of the Commission for Work among Colored People, the leading association of African-American clergy and lay leaders in the Episcopal Church. In 1908, he was appointed as Archdeacon for Negro Work in the Diocese of North Carolina. When the church decided to maintain segregated missionary districts for African-Americans, Delany was unanimously elected by the diocesan convention as Suffragan Bishop for Negro Work. On November 21, 1918, he was consecrated bishop in the chapel at St. Augustine College—a house of worship he had designed and helped to build with his own hands. He worked tirelessly throughout the Carolinas, planting and nurturing African-American congregations until his death on April 14, 1928.

Collect for Henry Beard Delany
Almighty God who frees your people with a mighty hand and outstretched arm: Grant strength to all your servants who, inspired by the example and prayers of Henry Beard Delany, hold fast, bearing witness to the truth of your love and justice in the face of oppression; through Jesus Christ our Lord. Amen. 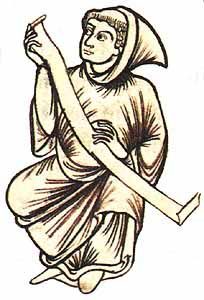 Aelred of Rievaulx was born in northern England in 1110. Thanks to a biography written shortly after his death, much is known about his life and travels.

After spending several years at the court of King David I of Scotland, Aelred entered the Cistercian abbey of Rievaulx, in Yorkshire, at the age of 24. In 1147, Aelred was elected abbot and led the abbey through a period of growth and expansion, growing the abbey to about 140 monks and 500 laymen.

A prolific writer who authored several volumes on spirituality, Aelred is also remembered as a tireless traveler and political negotiator. In addition to visiting the abbey’s five daughter-houses in England and Scotland, he also traveled annually to the general chapter of the Cistercians at Cîteaux (France). In 1138, he traveled to the Scottish border to help negotiate the transfer of a castle to King David of Scotland. Four years later, he traveled to Rome for an audience with Pope Innocent II as part of a group who opposed the election of William, King Stephen’s nephew, as Archbishop of York.

Aelred’s writings include histories and biographies, spiritual treatises, and sermons. For his talents as both an author and a church manager, Aelred has been called the “St. Bernard of the North” (in reference to Bernard of Clairvaux, a French Cistercian abbot). Although never formally canonized, he has been venerated as a saint since the 1400s. His feast is marked in the calendars of various churches on January 12, the traditional date of his death.

After reading his correspondence and a biography by a fellow monk, author John Boswell and a few other scholars have suggested that Aelred may have been gay. Because of this conjecture, and inspired by Aelred’s writings on friendship, Integrity U.S.A. and some other LGBT organizations have adopted Aelred as their patron saint, as well.

Collect for Aelred of Rievaulx
Almighty God, you endowed the abbot Aelred with the gift of Christian friendship and the wisdom to lead others in the way of holiness: Grant to your people that same spirit of mutual affection, that, in loving one another, we may know the love of Christ and rejoice in the gift of your eternal goodness; through the same Jesus Christ our Savior, who lives and reigns with you and the Holy Spirit, one God, now and for ever. Amen.

338 comments on “Henry Beard Delany vs. Aelred of Rievaulx”