In yet ANOTHER close battle in this historic week of Lent Madness thrill-a-minute action, Martin Luther finally put away the feisty Joseph Schereschewsky with a late surge 52% to 48%.

Today it’s an intriguing battle between two saints: one ancient, one modern. In fact, Sarah is the most ancient saint ever to make an appearance in Lent Madness while Jägerstätter is about as modern as we get. If nothing else you, valued Lent Madness voter, have a clear choice. The choice itself may not be clear, of course, without some serious discernment, but Sarah and Franz represent quite distinct eras in the realm of faith. To get to this round, Sarah narrowly defeated Elizabeth Ann Seton and Franz upset Joan of Arc.

This is both the penultimate battle of the Saintly Sixteen AND the last matchup of the week. We’ll take a deep cleansing breath over the weekend and be right back to it first thing Monday morning with Amelia Bloomer facing Fanny Crosby. Lent Madness rolls on! 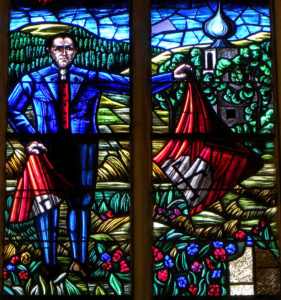 The arrest and imprisonment of Franz Jägerstätter was not a shock. As the Nazis overtook Austria, Jägerstätter talked openly about his condemnation of the Nazi ideology. When greeted on the street with a “Heil, Hitler!” Jägerstätter would respond “Pfui, Hitler” (roughly, “Ugh, Gross, Hitler”).

From 1938 on, Jägerstätter told the story of a dream that he had about a train. It was a beautiful train – attractive especially to the youth that streamed toward it. The voice in the dream was unequivocal, “This train is going to hell.” The dream served as a warning to Jägerstätter that no matter how attractive the Nazi movement seemed – especially to young people – it was nothing but pure evil.

Franz Jägerstätter’s writings bear witness to an unwavering faith and prophetic voice in the face of great adversity. Many of these letters and essays were written in the brief span of five months between his arrest and execution. Interestingly, much of that time was served in the Tegel Prison – which also housed Dietrich Bonhoeffer at the same time.

Jägerstätter is clear that his refusal to take part in the Nazi machine was not an attempt to influence opinion, or to change the course of the war. It was simply the right thing to do – and doing the right thing made all the difference, regardless of the cost. “Whoever sacrifices everything for God’s cause has made the best swap,” he said.

Jägerstätter was convinced of the power of faith – and of the damage caused by uncommitted faith: “Nominal Christians do the most harm to the church” … “Out of my experience I can say that life is painful when one lives as a lukewarm Christian. To exist in this way is to have more of the existence of a vegetable than to truly live.” Yet even with this firm conviction, he remained compassionate to those who didn’t follow his path: “One must not think poorly of others who act differently than I have. It is much better to pray than to pass judgment on others.”

Franz Jägerstätter ended his life alone in a prison – supported only by his wife as friends and neighbors and even his church advised him to let go of his principles and keep his life. Sixty-four years later a crowd of five thousand plus packed into the Cathedral in Linz and watched as – on the occasion of Franz’s beatification – 94-year old Franziska kissed a reliquary containing Franz’s remains and with tears flowing handed it over to the church. This mix of compassion and tradition, ritual and emotion, is a fitting tribute to Jägerstätter’s life. On that day, Cardinal Christoph Schönborn said, “Franz Jägerstätter was and is the most concrete and illustrative commentary on the Beatitudes I have ever heard.”

Out of all possible topics, Franz Jägerstätter’s last letter before his execution closes with a reflection on joy: “It would likely become a moment of dizziness if one were to think about the eternal joy of heaven. We are fortunate to experience a little joy in this world. But what are the short moments of joy in this world in relation to that which Jesus has promised us in his kingdom?” 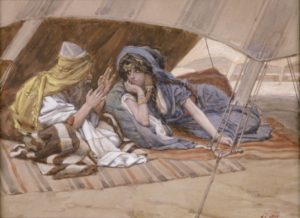 One of the challenges in writing about Sarah’s faithful actions and wise words is that so few of them are remembered. She is often a passive character and a silent wife. Perhaps 1 Peter 3:6 summarizes her passivity best: “Sarah obeyed Abraham and called him lord.” When we see her agency we best watch closely.

First, we should take note of Sarah’s quiet strength. A woman’s primary function was to bear children. It was commonly assumed that a woman who did not bear children was somehow at fault. To make matters worse, she was constantly reminded of her childlessness on account of the promise to Abraham. Sarah carried the shame of childlessness with grace and dignity into old age. Although the biblical authors do not give us any accounts, one can imagine the great depth of her strength and courage. It is no small thing that “Sarah laughed Isaac into the world and held the living proof of God’s promise in her own hands.”

In addition to the burden of barrenness, Sarah also was subjected to many of Abraham’s worst ideas. Two (two!) times he tried to pass her off as his sister. Sarah gamely played along but imagine the horror and struggle (and her commitment to Abraham to see it through). She also agreed to let Abraham attempt to fulfill God’s promise on his own through Hagar. When Hagar conceived and gave birth to Ishmael it was yet another reminder of Sarah’s shame.

Once the promise was finally realized, Sarah had to watch as Abraham took her long promised son to sacrifice him (although the Bible is clear that it was simply a test, neither Abraham nor Sarah does know this). Sarah certainly saw Abraham preparing for the journey and was forced to ponder the implications. Given Abraham’s track record for bad decision making, perhaps we should talk more about Sarah’s faith than her husband’s.

While much that has been described is reading between the lines, one ancient text, The Testament of Abraham, presents Sarah as an explicitly strong and insightful woman. She recognizes God’s messenger when Abraham does not and helps him see more clearly. Perhaps this was more often the case than not.

238 Comments to "Sarah vs. Franz Jägerstätter"