Holy upsets, Batman! Florence Nightingale has spoiled the 500th year of the Reformation with a 54% to 46% victory over Martin Luther. That sound you hear? Brackets being busted everywhere and fans of Luther crying in their beer steins. Florence has joined Stephen in the Faithful Four with two more spots remaining open.

Speaking of Luther and Lutherans (and Germany, for that matter), our two Lutheran Celebrity Bloggers, David Hansen and Beth Lewis, are going head-to-head today. Now, some saints have an incredible amount of kitsch in their kollective kupboards. Franz Jägerstätter and Mechtild of Magdeburg are not those saints. But does this stop our Celebrity Bloggers from scouring the internet? Of course not! They are always looking for the next kitsch to die in.

To get to the Elate Eight, Franz beat Joan of Arc and Sarah the Matriarch while Mechtild got past Isaac the Syrian and Odo of Cluny. Who will take the third spot in the Faithful Four? Well, that’s up to you. 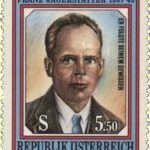 Some saints have had hundreds, and others thousands, of years in which to accumulate a collection of kitsch. Not so, with Franz Jägerstätter. He was beheaded for his opposition to the Nazi Reich only 73 years ago, and beatified in the Roman Catholic Church only a decade ago.

During his imprisonment, Franz wrote many letters to his faithful wife, Franziska: “I’ll write down a few words as they come to me from my heart,” he said. Honor his memory by writing your own words of love and witness and sending them with this Austrian stamp.

Of course, you might wish that more people could see your devotion to Blessed Franz – in which case this bumper sticker might be a good option. Jägerstätter wrote about strength that “Love of enemies is not weakness of personal character by a heroic power of the soul.” In an era of hyper-masculinity, remind people that “real men love peace” with this bumper sticker. 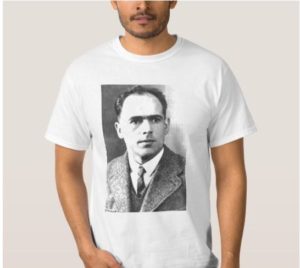 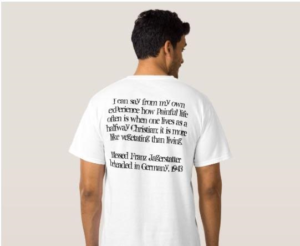 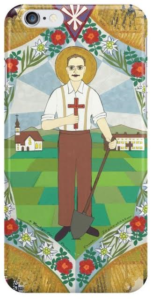 During Lent, let everyone who encounters you know that you are not a half-way Christian. This shirt with Jägerstätter’s face on the front, and his quote about the uselessness of half-way faith on the back.

Beatified only ten years ago, Franz Jägerstätter is a saint for the 21st Century. Carry this iPhone case with an icon on it as a constant reminder in your pocket of Franz’s life and witness, and the power of an everyday vocations like farming in the life of faith. 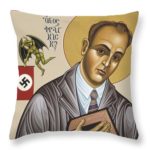 At the end of a long day, remember that Jägerstätter’s witness was faithful until the end of his life and his beheading in a German prison. Rest your head on this icon-covered throw pillow, and rest well trusting the grace of God. 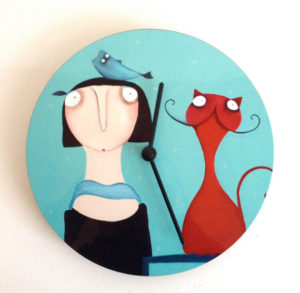 Sadly, not a lot of kitsch has survived the eight centuries since Mechthild of Magdeburg lived. There is this clock of Mechthild and her Cat available for purchase online, but I suspect it isn’t the same Mechthild.

We know that Mechthild spent her days living in community with the Beguines. Does this mean that she was the earliest proponent of the West Indian dance known as the beguine? A dance akin to the Foxtrot, it was first popularized some centuries after she lived by Swing bandleader Artie Shaw in 1938. 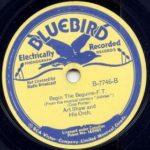 Then, dancing the beguine exploded across the big screen in 1940 with the flowing, light steps of Fred Astaire and Ginger Rogers in the film, Broadway Melody. 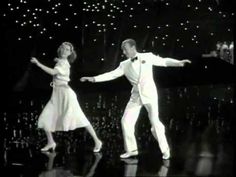 Since Mechthild was busy serving the infirm and poor in the neighborhood and writing her seven-volume series conveying the wisdom stimulated by her visions, she probably wasn’t dancing the beguine. She merely was one. 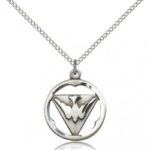 Thinking about the mysticism that inspired her writing does provide me with some kitschy ideas. For example, I wonder if her visions from the Spirit might have inspired present-day Spirit-oriented gift items readily available online and in Christian bookstores? A necklace or a keepsake box in which to keep it come to mind. Perhaps a gift box with the dove of the Spirit for a bottle of wine for your favorite priest or publisher? 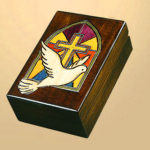 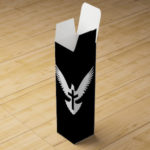 Just when I was about to despair of finding any appropriate Mechthild kitsch, I learned that there is a Catholic Church named for St. Mechthild in Magdeburg, Germany (where else?) 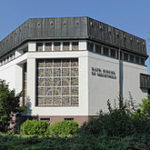 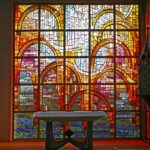 Their stained glass windows are quite contemporary and not particularly kitschy. But, that exploration took me to the Diocese of Magdeburg. Success! 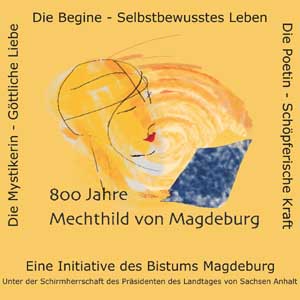 It turns out that in 2007, in celebration of her 800th birthday, the Diocese of Magdeburg hosted a birthday party of sorts. They created a logo commemorating the seven volumes that make up The Flowing Light of the Godhead.

On their website, they describe the celebration in this way: “the highlight will be the nightly staging of Mechthild’s life and work on the Elbe with around 200 participants and 35 boats… At the beginning of the performance, distinguished tourists are presented on a passing ship… At the end of the performance, Mechthild’s book and its feather can be seen on a very slow moving cargo ship. And on a smaller boat, the three great women of Helfta, Mechthild von Magdeburg, Mechthild von Hackeborn, and Gertrud the Great, glide by slowly, while the flowing Elbe reflects deep red light.” 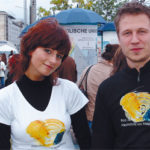 Now, with a description like that of the festivities, I was certain I’d find some kitsch to share! Alas, only this single photo of tourists wearing the ubiquitous festival t-shirts.

But, after 800 years, some legitimate Mechthild of Magdeburg kitsch is better than none.

133 Comments to "Franz Jägerstätter vs. Mechtild of Magdeburg"