Welcome to the Faithful Four! From an initial field of 32 saints, we are down to a holy four: Stephen, Franz Jägerstätter, Amelia Bloomer, and Florence Nightingale. The spiritual nets have been cut down and one of these saintly souls will, in a few short days, be awarded the coveted Golden Halo.

The odds-makers in Las Vegas are working overtime as people everywhere are putting their ecclesiastical coin on one of these four remaining ponies of the faith [here endeth the bizarre mixed metaphors].

While much remains a to-be-revealed penitential mystery, one thing about today's match-up between Stephen and Franz Jägerstätter is clear: Celebrity Blogger David Hansen will be participating in the Championship Round. How are we so sure of this? For the first time ever, David will be advocating for BOTH of his remaining saints who just happen to be named Stephen and Franz.

To make it to the Faithful Four, Stephen got past Alban, Henry Budd, and Augustine of Canterbury while Franz defeated Joan of Arc, Sarah the Matriarch, and Mechtild of Magdeburg. 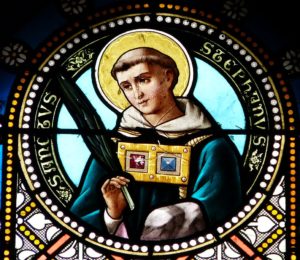 Every congregation, every ministry has had the same moment.

An opportunity arises, some great moment for ministry, and all you need are volunteers. A sign-up sheet goes out, or an announcement is made. And crickets – nothing. No one steps up.

Lots of people have great ideas.  Many voices seem to know what is best for the church.

But what we need are people who will step up. Faithful men and women who will do the work that needs to be done, and who will say the difficult things that need to be said.

Stephen had just a short appearance in the story of Scripture – a flash of action and conviction. But his impact and inspiration has rippled through the millennia.

Stephen’s title was “deacon” – a word that means “servant.” One who serves others. A deacon is one for whom faith is not a thing you possess – faith is a way you live, an action you take. Faith is not an impulse of the heart, but a life of actively caring for and loving the neighbor. As one of the church’s first deacons, Stephen’s example was an inspiration to all those who took up – and continue to take up – that title after him. 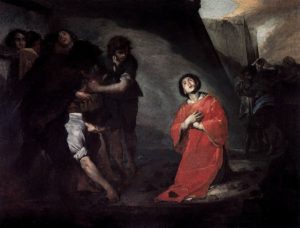 started to make sure that our neighbor was fed, safe, healthy, and cared for?

Stepping up to act.

If that were all, it would be enough. But Stephen doesn’t make us choose between actions and words.

When he is brought before the religious institution, he speaks up – with boldness and conviction. His is the longest of all the sermons in the Book of Acts. A life of service drove Stephen to words of conviction.

Stephen could have taken the middle road. Appeased the authorities. Spoken gently. But there were things that needed to be said. And so Stephen stepped up.

As a preacher, I can’t imagine the courage Stephen needed in that moment. To know that it could cost him everything, and still to step up and say what needed to be said. What would our world look like if more people preached with Stephen’s courage?

Stepping up to speak up.

If that were all, it would be enough.

But after his service to others, after his bold words, Stephen is not done. At the very end, most courageous, most astounding of all, Stephen forgives the very people who are in the middle of making him a martyr. What would our world look like if more people reacted with Stephen’s mercy?

Stepping up to be merciful.

A life of service, courageous preaching, and mercy.

Step up, Lent Madness participant, and vote for Stephen. 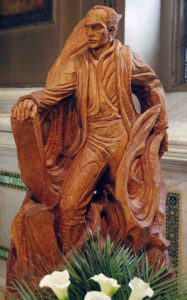 Just a year ago, I had no idea who Franz Jägerstätter was. When I was assigned to shepherd Franz through Lent Madness, I thought: “Sigh. Another one that no one has ever heard of. We won’t make it past the first round.”

Then I learned his story. Right out of the gate, I began to believe that Franz Jägerstätter should be a name known by more people. I was first struck by his martyrdom following his refusal to take the Nazi Military oath. He was a conscientious objector – a man that refused to bow to the pressures of the world even when it cost him everything.

And the more I got to know about Blessed Franz’s life, the more passionate I became about sharing his story. He was the single “no” vote in his village in the plebiscite that gave official cover to the Nazi annexation of Austria (How rare was this resistance? Across Austria, the annexation was approved with a recorded 99.7% approval). His priest and his bishop advised him to take the military oath and serve in the German army. His neighbors advised him the same. Even in Nazi prison, his home priest visited him to try and persuade him to give in. Only his wife, Franziska, supported him. Can you imagine the courage it took to not just stand for the right, but to stand so utterly alone?

For many, an awakening like Franz’s might lead to ordination or to a religious order. But Franz showed us a path that is just as important – but far less often lifted up: faithful service in the world. He remained where he was. A farmer. A spouse. A parent. A church member. A neighbor. A citizen. Franz Jägerstätter stands as an example to all of us who are called to live out holy vocations in “ordinary” life. 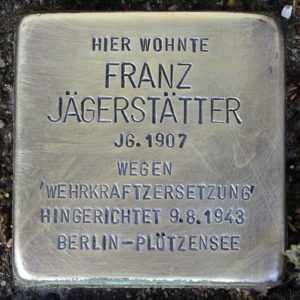 In his last weeks, Jägerstätter wrote the following about his own words: “I’ll write a few words as they come to me from my heart. Although I’m writing them with my hands in chains, it is better than if my will were in chains.”

He condemned National Socialism, but cautioned against judgment against his neighbors who got caught up in the movement. He urged his readers to be passionate faith, but spoke of gentle understanding for those whose faith was not at the same place. He reflected on the dark times facing the world, but always pointed toward the light and hope of Jesus.

Taken together, his martyrdom, his life, and his writings stand as a powerful witness of faithful obedience and love during difficult times. This balance of realism and hope, of passion and compassion, of conviction and graciousness is precisely the voice needed in our world today.