What's in a name? Eglantyne Jebb and Seraphim of Sarov might just have some theories on this question. The twelfth battle of the first round pits a 20th century English laywoman against an 18th century Russian monk.

In yesterday's action, Dymphna played cat and mouse with Gertrude of Nivelles before prevailing 58% to 42%. She'll face the winner of John of Beverley vs. Martin of Porres in the Saintly Sixteen.

For those of you who filled out brackets in advance, how are you doing? Anyone still have a perfect bracket? Anyone 0 for 11 (which, frankly, would be equally impressive). We know it's about learning rather than winning. But still. We know there are some competitive Christians out there... 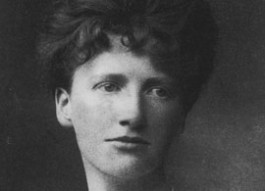 Eglantyne Jebb didn’t care much for children. This is ironic, as Jebb founded Save the Children, an international non-governmental organization that promotes children’s rights, provides relief during crises like natural disasters and armed conflicts, and helps children have a healthy start in life in 120 countries, according to its website.

“It is a judgment on me for not caring about children that I talk all day long about the universal love of humanity toward them,” she said. But Eglantyne’s story goes to show God can use us in unexpected ways. God can call us to join in the work God is doing all around us, to respond to needs unique to our time and place.

In 1918, while others were celebrating the end of World War I, Eglantyne was protesting the impact of the Allied blockade after seeing newspaper photos of starving children in Germany and other European countries. She was born into a well-to-do British family of strong women who worked to meet the needs they saw in society. Originally, she studied to become a teacher, but she called it quits after a year because of that not-caring-much-for-kids thing. She became involved in the Charity Organisation Society and later traveled to Macedonia to report on refugees. Those experiences revealed to Eglantyne the difficulties faced by children in poverty and in crisis around the world.

Eglantyne was arrested for protesting—for handing out pamphlets in London with moving images of those children. Her trial made her famous, and while she was found guilty, the judge publicly gave her the money to pay the fine. That money became the first donation to Save the Children.

The organization was the first to take out full-page newspaper advertisements to promote its work and the first to enlist celebrities to promote its cause, according to Jebb’s biographer Clare Mulley. That’s something you can thank her for the next time you hear Sarah McLachlan’s voice with pictures of Precious Moments-eyed puppies.

Save the Children campaigned for the Declaration of the Rights of the Child, which later was adopted by the United Nations, and the organization continues Eglantyne’s unlikely work today. The Church of England remembers her life and service each year on December 17.

Collect for Eglantyne Jebb
Almighty God, you appeared before Moses as a burning bush and in the heart of your servant Eglantyne Jebb as a white-hot flame: Encourage us with the same fierce and fiery spirit to defend the least, the lost, the lonely, and especially children in distress, that we may ease their burdens and live into your love and will with childlike faith; through Jesus Christ, our Lord and Savior. Amen. 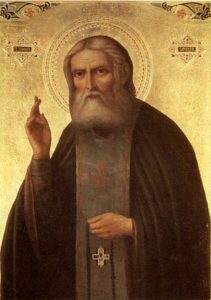 One of the most well-known saints in the Eastern Orthodox Church, Seraphim of Sarov embraced the Holy Spirit and expounded upon monastic practices of contemplation and self-denial. Born Prokhor Moshnin on August 1, 1759, Seraphim became quite ill at age ten and saw in a vision a promise from the Virgin Mary that she would heal him. A few days later, he was brought to an icon of Mary that was known to have healing power. Shortly after touching the icon, he became well.

His interest in the church continued to grow, and in 1777, he joined the Sarov monastery. His mother supported his entry into the monastery and gave him a copper crucifix that he wore his whole life. In 1786, he became a monk, and seven years later he became a monastic priest.

Seraphim is known for his asceticism. He only ate one meal a day and fasted on Wednesdays and Fridays. One of his notable feats was praying for 1,000 nights with his arms outstretched.

Shortly after becoming a priest, he moved to a log cabin in the woods and lived as a hermit for twenty-five years. When wild animals came to the hermitage, he would care for them. One time, he was seen feeding a bear from his hand.

At one point Seraphim was attacked in the woods by robbers. They beat him but he did not resist. They left him for dead. They found nothing but his icon of the Mother of God of Deep Devotion. Although he recovered from the assault, Seraphim walked with a hunched back for the rest of his life. When the robbers were caught and being tried, Seraphim asked the judge for mercy on them. He later would say, “Acquire a peaceful spirit, and thousands around you will be saved.

He returned to his cabin in the woods, and many people made pilgrimages to him for healing and to hear his prophetic words. Seraphim would often answer their questions before they were even asked.

Seraphim of Sarov died kneeling before an icon of the Theotokos—Mary, the God-bearer—on January 14, 1833.

Collect for Seraphim of Sarov
Almighty God, you have surrounded us with a great cloud of witnesses: Grant that we, encouraged by the good example of your servant Seraphim of Sarov, may persevere in running the race that is set before us, until at last we may with him attain to your eternal joy; through Jesus Christ, the pioneer and perfecter of our faith, who lives and reigns with you and the Holy Spirit, one God, for ever and ever. Amen.

223 comments on “Eglantyne Jebb vs. Seraphim of Sarov”