Today in Saintly Sixteen action, Esther squares off against Michael the Archangel. To make it this far, Esther made it past Lazarus while Michael got by Anna the Prophet. Will St. Michael or one of the “all angels” prevail?

Yesterday, Anna Alexander made it past Edith Cavell 65% to 35% to advance to the Elate Eight. She’ll face the winner of Eglantyne Jebb vs. Catherine Winkworth. By the way, our Bracket Czar Adam Thomas delved into bracket history and has ruled that Monday’s battle that saw Maria Skobtsova trounce Quiteria 91% to 9% was the most lopsided victory ever in the modern era of Lent Madness. The previous record was from 2014 when Basil defeated Antony of Egypt 87% to 13%.

Oh, and did you miss the Tuesday edition of Monday Madness? If you can stand the planets being out of alignment, watch it here. 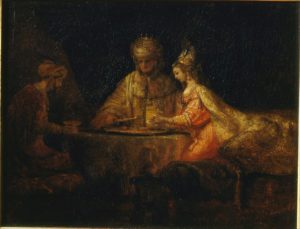 Esther, or Hadassah in Hebrew, was the secretly-Jewish queen of Persia who saved her people from genocide through her prayer, bravery, and wits, as recorded in the Bible.

She is celebrated in the church on July 1 in the Eastern Orthodox church. Note that the Orthodox church does not have the same requirements for sainthood as you might be used to: she joins luminaries like Abraham, Joseph, and Jacob on the calendar. Also, recall that in the years before formalized bureaucratic processes, saints were not made by the Church; they arose, grassroots-style, from the people.

In Esther’s case, she became very popular with a particular group of people in Spain, born from one of the worst sins the Church committed. During the Spanish Inquisition of the late 15th century, the Jews of Spain were given a life-or-death choice: convert to Christianity, flee the country, or die. For the Jews who chose conversion, such a capitulation did not reward them with an easy life thereafter: they were ridiculed and shunned by their former community, and denigrated and distrusted by their new co-religionists. The word for this group of converted Jews in Spanish among the Spanish Catholics was ‘marranos’ or ‘pigs’ which should give you an idea of how they were received. In the face of such hatred from all corners, this beleaguered group found a way to hold on to their identity in secret.

Because they were not able to celebrate Purim or Passover, or any of the traditional festivals, the Jewish converts became much enamored with a Saint Esther, and threw themselves into celebrating her festival in the spring—around the same time as Purim and Passover would normally fall. St. Esther’s festival could pass as acceptable, because after all—was she not in the Christian Bible? Was she not a biblical heroine? Surely all good Catholics had heard of Saint Esther! Icons of her began to appear all around.

Many of the converted Jews fled to the New World, and seemed to have taken their love of Esther with them to Mexico and the American Southwest (although there is conflicting information on this). The retablo style of iconography soon grew to include Esther, and celebrations of her feast day sprang up in the small towns of New Mexico.

Esther’s story, of a woman who secretly clung to her faith in spite of all oppression, spoke to those who were experiencing the same sort of trials at the hands of the Church. Her sainthood then is both a rebuke of the Church’s sins, and a hope that people of faith may learn from her witness in the future. 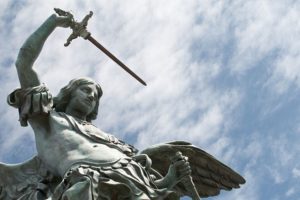 The Archangel Michael is not known for giving interviews, so quotes from the Archangel are rare (read: nonexistent).

Quirks, however, are plentiful, particularly those associated with the many monasteries, churches, and holy sites named in honor of St. Michael.

One particularly fascinating quirk is the legendary Sword of Michael, a straight line of monasteries and churches forming a spiritual path devoted to St. Michael in the form of Michael’s sword. The hilt of the Sword begins at Skellig Michael (meaning Michael’s Rock), a 6th century monastery off the coast of Ireland (or somewhere in a galaxy far, far away, if you’re a fan of the latest Star Wars movies).

Needless to say, the bishop began the foundations of Mont Saint-Michel immediately.

Its English counterpart, located off the coast of Cornwall in a tidal area with similar characteristics, is Saint Michael’s Mount, also built in the 8th century and serving as a monastery until the early 11th century, when it passed into private ownership.

No legends tell of Michael burning holes to encourage the building of this edifice, although the island’s west side was long-known as a place local fisherman would row past before going out to sea, as Michael would appear and warn of any imminent danger that awaited them.

While not directly associated with Michael, the island is also known as the dwelling place of a giant who would steal cattle and children until a young man named Jack ventured to the Mount, dug a deep pit while the giant was sleeping and blew a loud horn to startle the giant awake. Raging to find the source of his disturbed sleep, the giant stormed out of his castle and fell into the deep pit, and the legend of Jack the Giant Killer was born.

Esther: Ahasuerus and Haman at the Feast of Esther, by Rembrandt

159 Comments to "Esther vs. Michael the Archangel"