Last week, the Supreme Executive Committee of Lent Madness announced that we would be giving away three free mugs featuring 2013 Golden Halo winner Frances Perkins. These are precious collectors’ items, and it’s possible the winners will sell their mugs for a golden fortune. To enter, people were invited to like and share a post on the Forward Movement Facebook page, and the winner was chosen randomly. 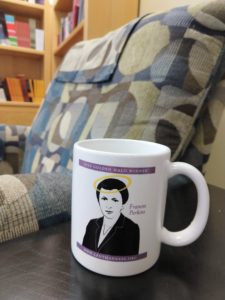 We are pleased to announce that the three winners are Christine Mills, Michelle Crull, and Susan D. Amussen! Soon they’ll be enjoying their coffee (which some have called “satan’s drink”) or tea out of rare, union-made  mugs.

Speaking of collectors’ items, if you want to get an early start on expanding your own collection, it’s not too early to pre-order your 2019 Golden Halo winner Lent Madness mug. It will feature the winner of this season’s epic competition, the tenth anniversary year and first-ever all-woman Faithful Four. Be the envy of your friends as you enjoy your favorite warm beverage later this spring or early summer, when the all-new mug ships. It will feature Martha, Pandita, or Zenaida.