Welcome to the Faithful Four! Over the past few weeks we have whittled down the field from 32 saintly souls to a holy four: Martha of Bethany, Gobnait, Zenaida, and Pandita Ramabai. The spiritual nets have been cut down and one of these four will, in a few short days, be awarded the coveted 2019 Golden Halo.

This marks the first time in Lent Madness history that we have an all-female Faithful Four. This means that at the end of this 10th year of Lent Madness, we will have crowned five male winners and five female winners.

Today it’s Martha of Bethany vs. Gobnait. To make it this deep into our little tournament, Martha got past Mary of Bethany, Nicodemus, and Photini, while Gobnait defeated Hrotsvitha, Paula of Rome, and Ignatius of Loyola.

Tomorrow Zenaida will tangle with Pandita Ramabai and then our respective Faithful Four winners will vie for the 2019 Golden Halo on Spy Wednesday, with the winner being crowned at 8:00 am on Maundy Thursday. 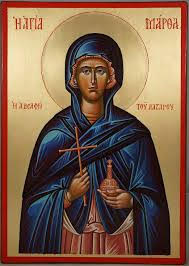 “Martha, Martha.” The chiding comment of Jesus is one of the most familiar in the New Testament. If the story of the parable of action versus contemplation in which she expresses bitterness toward her sister, remains all we know of Martha, then she would hardly be worthy of the Golden Halo. Thankfully, the Christian tradition recorded her importance in the early church as a disciple and leader. The theological imagination of the faithful kept her story alive in both Cypress and France, where the very habits she was chastised for—hospitality and service—were recognized as her spiritual gift and the foundation of her ministry. She was not relegated to the role of “the sister who got it wrong.”

Ever since I began to discern my call to the priesthood and through my priestly formation in seminary, I have wrestled with my active nature, attempting to become more contemplative. I imposed disciplines upon myself and tried many forms of prayer and meditation. Although many principles of contemplative prayer and mindfulness seeped into my way of being, the stillness and quiet never took, and I saw this as a failure. Finally, thanks to my spiritual director, I accepted God has called me to be a Martha, busy with the work of love and service. I should stop painfully trying to become something I wasn’t called to be. Just as the medieval hagiographies saw in Martha an ultimate reconciliation of action and contemplation through her ministry of hospitality, so can all of us Marthas celebrate rather than resist our spiritual gifts.

As her medieval biographer, Psuedo Marsalia wrote, “Martha chose to perform her own ministry and it pleased God greatly.” We do not choose 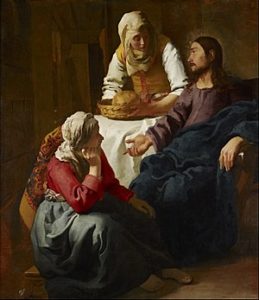 the calling God gives us. Sometimes we or others don’t understand, or we are tempted, like Jonah, to run away. Perhaps it was Martha’s courage to follow her own true vocation to action and service that allowed her to perform miracles similar to Jesus—water to wine and resurrecting a child. Perhaps it made her a figure with the strength to tame dragons, honored to this day as Santa Marta Dominadora, the dominator, helper of the oppressed, the most Christlike calling.

Regardless of whether we are inclined to action or contemplation by our temperament and vocation, the hectic pace of modern life demands all of us be doers. We must all look to Martha’s example for guidance. Grounded in love for Jesus, we can serve and lift up others. Since Martha’s lifetime, many have followed in her footsteps as busy worker bees building up the kingdom of God. But Martha was the first, our Biblical example of a holy, active life, and for this reason, she deserves the Golden Halo. 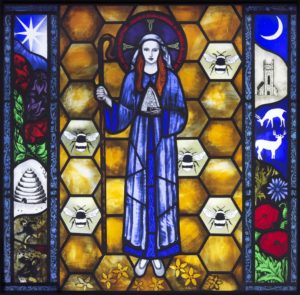 There are those who are quickly recognized for their life and work. Some who stand out in the church because of their positions: priest, bishops, and deacons. Others whose work is so public that we can’t help but notice them: public martyrs, activists, and those in the news. And still others whose works are enshrined in the literature of our faith: those recorded in Scripture, in the great works of church history, and in the annals of reform and renewal.

These names we know.

Yet the bedrock of the church are those who toil daily in the faithful work of discipleship. Women and men whose names are often forgotten – those who are overlooked by history.

It is among these quiet, daily disciples that we discover Saint Gobnait.

One of Gobnait’s patronages is iron-workers. When excavating the site of Gobnait’s home in 1952, they discovered the remains of 137 iron forges. Can you imagine the number of workers required to sustain such a site? There must have been – covered in soot and ash, in the midst of the hea

t, creating goods and artwork that would be used and enjoyed by those with wealth – a whole host of laborers and their families living out their days without recognition.

And yet history would have us overlook Gobnait. Her life is not known because she shows up in the historical record of the day, or because an early historian recorded her life.

Instead, we know of Gobnait from two sources. She is a part of the Life recorded about her brother Saint Abban. And she is remembered through the stories preserved by the ordinary people in her community and passed down through the ages.

Perhaps at this present moment in the life of the church, we need less “superstars” and more ordinary saints. Faithful people struggling with what it means to be disciples in the grind of daily life. Unnamed folks far from the spotlight performing extraordinary acts of love, kindness, and service on behalf of those who need it most.

PLEASE NOTE: At about 9:52 p.m. EDT, the SEC confirmed some voting patterns that we had been monitoring since the afternoon. There were a number of repeat votes for Gobnait, cast by people who were not respecting the one vote per person rule. As a result, we have blocked several addresses and have removed 150 votes from Gobnait to compensate for that number of inappropriate votes. This is your reminder not to vote more than once per contest.

FURTHER NOTE: Multiple additional addresses have been blocked around 11:18 p.m. EDT. Please enjoy your play, but vote ONCE. Keep Lent Madness fair and fun for everyone.

138 Comments to "Martha of Bethany vs. Gobnait"