Hey, today marks the very last matchup of the Saintly Sixteen! Elizabeth Fry faces Clare of Assisi in an attempt to join Herman of Alaska, Harriet Tubman, Hildegard of Bingen, Brother Lawrence, Margaret of Castello, Joanna the Myrrhbearer, and Joseph in the Elate Eight.

As hinted at above, on Friday Hildegard of Bingen took down Elizabeth the New Martyr 57% to 43%. This means that of the quartet of Elizabeths in the 2020 bracket only Elizabeth Fry remains. Will a single Elizabeth continue on in this year's tournament? Or will the four be barred from further Lenten glory? That's the decision you'll make today, friends. Now go vote -- it's the last full week of Lent Madness! 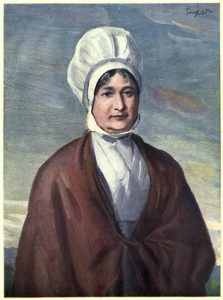 “Oh Lord, may I be directed what to do and what to leave undone.”

Imagine an industrious nineteenth-century woman of conviction who, after giving birth to eleven children, had her eyes opened to the brutal and horrifying conditions of women in her society. Elizabeth Fry was so compelled to act and so efficacious that she prayed for guidance about what to leave undone. Elizabeth, called Betsy, was a devout Quaker and saw the inner light of God in every person no matter their race, social class, or the crimes they’d committed. She had the wisdom to understand the causes of social problems and the courage to change them, working to reform the status of women and for the cause of abolition. She is best known as a prison reformer.

“Punishment is not for revenge, but to lessen crime and reform the criminal.”

The prison officials at Newgate warned her that visiting inmates was dangerous, but she was not thwarted. In the prisons, she saw inmates starving if they had no family to pay for their meals, children imprisoned with their mothers and clinging to them as the women were taken away to be hanged.  Her goal was "to provide for the clothing, instruction, and employment of the women; to introduce them to a knowledge of the Holy Scriptures, and to form in them, as much as possible, those habits of sobriety, order, and industry, which may render them docile and peaceable while in prison, and respectable when they leave it.”

In the prison, she taught women hygiene and skills they could use to earn an income. She advocated that women should be housed apart from men, supervised by female guards, and separated by the severity of the crime. She comforted them and read to them from the Bible.

Prison officials were astounded by her results. The most dangerous and undisciplined inmates were transformed into model citizens of the jail, truly reformed and ready to live an honest life upon their release.

Like Jesus, Elizabeth Fry knew the transforming power of love shown to someone who thinks herself unlovable. She spoke up for women who’d been sentenced to death, arguing for the sentence to be lessened. When her pleas fell on deaf ears, she went with the condemned women to comfort them in the moments before execution.

She went from her work in the squalid jails to the palace, where she several times was granted an audience with Queen Victoria, who greatly admired her and financially supported her cause. For her tireless work and groundbreaking reforms, she was granted a key to Newgate Prison.

Fry’s accomplishments are so widely recognized in England that for fifteen years (2001-2016) her image was on the £5 note. On it, she was depicted reading to the inmates and the design featured the motif of the key she was awarded. In her memory, the Canadian Association of Elizabeth Fry Societies works on behalf of incarcerated women and organizes National Elizabeth Fry Week every May.

Like those who continue to honor her, may we all be so convicted, wise, and efficacious as to need to ask God what good works we ought to leave undone. 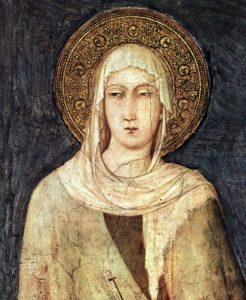 St. Clare of Assisi is the first female follower of St. Francis of Assisi and the first woman to write a Rule of Life for a monastic order, what she founded as the Order of Poor Ladies and is known today as the Poor Clares.

She also is a saint for our time, living the #QuarantineLife cloistered with her sisters long before it was mandated for many people all over the world amid the current coronavirus pandemic.

Her austerity, fasting three days a week and praying through many sleepless nights, meant she often was sick and confined to her bed.

That didn’t keep Clare from participating in worship, however.

One Christmas, unable to attend Matins in the chapel with her sisters, Clare sighed, “Lord God, look, I have been left here alone with you.” Immediately, she was able to hear the music and liturgy as if she were in the chapel herself. She even viewed the baby Jesus lying in the manger, as the Gospel of Luke describes, which is why she now is recognized as the patron saint of television.

Like many of us who are staying home to prevent catching or spreading the coronavirus, Clare turned to a pet for comfort during those times she was alone — and once for a towel that was just out of her reach.

When a little cat in the monastery attempted to drag the towel to her, Clare chastised it for dragging it on the ground. The cat, as if it understood, responded by rolling up the towel and carrying it to her neatly.

During the war of Assisi, members of Emperor Frederick II’s army scaled the wall of the monastery of San Damiano. Clare comforted her sisters: “Do not be afraid, because they will not be able to hurt us.”  Then she threw herself on the ground in front of a monstrance holding the consecrated bread for the Eucharist, praying, “Lord, look upon these servants of yours because I cannot protect them.” The troops suddenly fled, and the saint now is depicted holding a monstrance.

Clare also is credited with a number of miraculous healings — once healing five sisters at once by making the sign of the cross over them while delivering their medicine.

And Clare wrote a handful of letters to Blessed Agnes of Prague, through which she still speaks to us. They include the quote she perhaps is best known for: “Love Him totally who gave Himself totally for your love.”

89 comments on “Elizabeth Fry vs. Clare of Assisi”