On the last day of a full (in some ways endless?) week, the Saintly Sixteen heads back to the Biblical quadrant for a showdown between Elizabeth and Joseph. To get here, Elizabeth got past Andrew while Joseph bested Joshua. Reminder before you start complaining: No one said any of this was fair. It’s called Lent MADNESS, after all!

We’ll see everybody first thing Monday morning as the Saintly Sixteen continues with a matchup between Brother Lawrence and Margery Kempe. Have a great weekend, everyone, and stay safe out there! 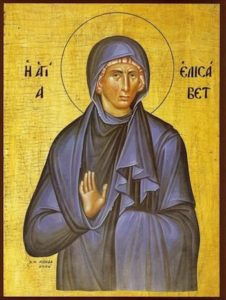 Elizabeth (biblical figure, mother of John the Baptist, wife of Zechariah) doesn’t have a treasure trove of legendary stories about her.

There are a few in the non-canonical infancy gospels. In one story, she has to escape Herod’s marauding soldiers with the baby John, and so she begs the mountains above to come to her aid. Miraculously they split open, revealing a cave, and provide shelter for her and the infant for years. An angel of the Lord stands guard over them until the danger has passed.

If you’re reading the above and wondering where Zechariah is, he was murdered in that story. (The Infancy Gospels are DARK, man.) In the Infancy Gospel of James, Zechariah is martyred in the Temple by some furious soldiers when he refuses to tell them where his wife and child are. The other priests arrive in the morning to find his blood turned to stone, and the walls of the Temple crying out news of what has occurred. They then cast lots, and appoint Simeon to take his place–who acclaims the Baby Jesus the salvation of Israel in Luke. (The Infancy Gospels also like to tie up loose ends.)

St. Hippolytus suggests that she and Mary, mother of Jesus were sisters, in an echo of the relationship that Jacob had with Leah and Rachel.

Now, it should be said that others besides orthodox Christians also honor Elizabeth. The Mandeans, who hail John the Baptist as the true Messiah, and still exist in tiny minorities in Iraq, Syria and New Jersey (look, all religious minorities end up in New Jersey), are big fans. According to their Gospel of John the Baptizer, Elizabeth was 88 when she conceived John, and found him in the basin of the River Jordan. We also are told that she and Zachariah survive into the public years of John’s ministry. At one point, John returns home after a long absence, and Elizabeth is so thrilled to meet him, she rushes outside without her veil. Because of this lapse, Zachariah wants to divorce her, but John talks him out of it.

Again, in these legends we see a picture of a woman who is brave, compassionate, and so caring that she is honored among many religious traditions, not just one. 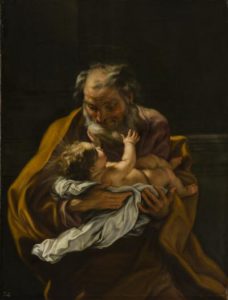 Despite the current pandemic, the feast of St. Joseph was heralded and celebrated yesterday (March 19), with pastries and special foods (as much as was available).

In many ways and to many people, Joseph is considered a man for all ages. While his words were never recorded, his actions speak volumes.

What is known about the life of Joseph is limited. The Gospels tell of a man dedicated to caring for his wife Mary and her son Jesus, and dedicated to upholding and teaching the traditions of his faith. A deeply observant Jew, he silently witnessed the religious and societal milestones of Jesus’ life.

What is known about the impact of Joseph is not silent. Images and representations of his life surround us. He made an indelible mark on the world culture and society in such facets as religion and educational institutions. Prayers are often offered to Joseph for a holy death. His influence is indisputable and undeniable, as evident through the heralding of his life by important religious and spiritual leaders.

Early church leader St. Gregory of Nazianzus in the 300s likened Joseph to the sun. “The Lord has arrayed Joseph, like with a sun, in all which the saints possess together in regard to light and splendor.”

In the Middle Ages, St. Thomas Aquinas addressed Joseph as the patron for everyone: “Some Saints are privileged to extend to us their patronage with particular efficacy in certain needs, but not in others; but our holy patron St. Joseph has the power to assist us in all cases, in every necessity, in every undertaking.”

St. Teresa of Avila in the 1500s spoke to Joseph’s connection with God: “Though thou hast recourse to many saints as thine intercessors, go specially to St. Joseph, for he has great power with God. Those who give themselves to prayer should in a special manner have always a devotion to St. Joseph; for I know not how any man can think of the Queen of the angels, during the time that she suffered so much with the Infant Jesus, without giving thanks to St. Joseph for the services he rendered them then.”

At the end of the 1800s, Pope Leo XIII spoke of Joseph’s character: “He was both the true and chaste spouse of the Blessed Virgin Mary, and the foster-father of the Word Incarnate. For these two reasons, St. Joseph shines among all mankind and approaches nearer than any other saint to the holiness of the Mother of God.”

Framing him as a man for all times, Pope John Paul II said: “Saint Joseph was a just man, a tireless worker, the upright guardian of those entrusted to his care. May he always guard, protect and enlighten families.”

Although words uttered by Joseph have not survived the centuries, his influence is timeless.

117 Comments to "Elizabeth vs. Joseph"