Only in Lent Madness will you find a 12th century mystic facing off against a 6th century hymn writer. Well, maybe you can find a matchup between the likes of Hildegard of Bingen and Romanos the Melodist elsewhere in the world. But we’re dubious.

In yesterday’s Biblical battle, Bartimaeus saw his way past Jude 54% to 46%. He’ll face the winner of Joanna the Myrrhbearer vs. Junia in the Saintly Sixteen.

Did you know that at the 2020 Rooted in Jesus conference in Atlanta, Presiding Bishop of the Episcopal Church Michael Curry made his Lent Madness predictions? You can hear what he had to say as part of his Way of Love podcast in his conversation with Lent Madness creator Tim Schenck by clicking here. While we encourage you to listen to the entire 17 1/2 minutes, the Lent Madness conversation starts at minute 10. 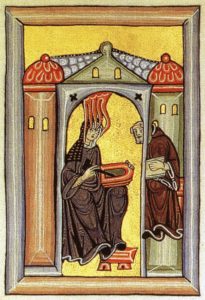 Hildegard was born in 1098 in the Rhineland Valley and later wrote that she began experiencing visions of God as a child. When Hildegard was eight years old, her parents placed her under the care of Jutta, an anchoress, and she became part of a growing community of religious women attached to the male Benedictine monastery at Disibodenberg. Upon Jutta’s death in 1136, Hildegard was elected as magistra of the growing community of women, whereupon she pressed the head of the Benedictine monastery to allow her community to form a new monastery in Bingen. Despite initial objections, Hildegard ultimately founded St. Rupertsberg monastery in Bingen in 1150 and later a second monastery in Eibingen in 1165.

When Hildegard died in 1179, she left behind three volumes of visionary theology, including her most well-known theological work, Scivias, as well as soaring liturgical compositions and the morality play Ordo Virtutum. Her 400 letters represent one of the largest collections to survive from this period, and her other writings include sermons from four preaching tours, volumes on natural medicine derived from her gardening and healing practice, an invented language, gospel commentary, and many more minor works.

Reviewing the various short biographies on Hildegard, it is apparent that she had a gift for getting what she and her community needed despite the ecclesiastical restrictions of her time. When Hildegard asked for permission to found a monastery in Bingen, she had already laid the groundwork with the Archbishop of Mainz. Later, Hildegard became famous when a papal blessing for a portion of Scivias was construed as papal approval for the wide range of her theological work. Was this an accident or an example of being as wise as serpents, innocent as doves? Either way, it was a milestone in clearing the pathway for Hildegard to become a much sought-after theologian, spiritual advisor, and preacher across northern Europe.

Much more could be said about Hildegard, including her theological notion of viriditas or “greenness,” her understanding of medicine as a form of gardening, and the uniqueness of her liturgical music, but what stands out is her visionary leadership in a time when this was very difficult to achieve.

Collect for Hildegard
God of all times and seasons: Give us grace that we, after the example of your servant Hildegard, may both know and make known the joy and jubilation of being part of your creation, and show forth your glory in the world; through Jesus Christ our Savior, who lives and reigns with you and the Holy Spirit, one God, for ever and ever. Amen. 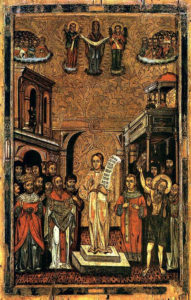 Saint Romanos the Melodist wrote hymns during the sixth century, the golden age of Byzantine hymnography. Most biographical information about him comes from the Menaion, a liturgical book of fixed-date propers in the Eastern Orthodox Church. He is believed to have been born to a Jewish family in Syria and was baptized Christian as a young boy. Later he was ordained a deacon in Beirut, then moved to Constantinople to serve as the sacristan at the Hagia Sophia.

The most important legend about Romanos revolves around a vision of Mary and is indeed the origin story for a whole category of music in the Eastern Orthodox church: the Kontakion. The story goes that Romanos began as a lousy singer and reader of the liturgy, and his fellow clergymen made fun of him. Once, after reading from the psalter, he was so ashamed that he put his head down and fell asleep in the church. Mary visited him in a dream and commanded him to eat a scroll she held in her hand. When he awoke, he went to the pulpit and chanted the hymn for which he is best known, the Kontakion of the Nativity, which is largely a dialogue between the Mother of God and the Magi. The beauty of his singing and the wisdom of the theological lyrics moved all.

Romanos wrote his hymns in Greek, and they are renowned for their linguistic beauty and sophisticated style. Although he is believed to have written more than a thousand hymns, only sixty to eighty are still in existence—and not all of those can be verified as his compositions. Rather than esoteric theologies, the hymns are in language accessible to the laity, and they address the pastoral concerns of the average person, making beautiful and accessible the mysteries of the Christian faith. They celebrate feasts and holy other days as well as saints’ lives and biblical themes. In addition to the nativity, his other notable works include the Last Judgment, the betrayal of Judas, and the martyrdom of Saint Stephen.

He is remembered on October 1 alongside the feast day of the Protection of the Mother of God in the Orthodox Church and is the patron saint of liturgical singers.

Collect for Romanos
O God, whom saints and angels delight to worship in heaven: Be ever present with your servants like Romanus the Melodist who seek through art and music to perfect the praises offered by your people on earth; and grant to them even now glimpses of your beauty, and make them worthy at length to behold it unveiled for evermore; through Jesus Christ our Lord. Amen.

128 Comments to "Hildegard of Bingen vs. Romanos the Melodist"