Saints end up in the Lent Madness bracket for a variety of reasons. Some for heroic acts or miracles, some for leadership or great teachings. And some simply because they have cool names (ie. Christina the Astonishing in 2014). Today’s saintly souls didn’t end up in the bracket because of their names alone, but they are kind of awesome. Hermione vs. Melangell. It just kind of rolls off the tongue — at least if you can pronounce them. But just to be clear, Hermione is not the one from the Harry Potter series. And Melangell is not the one from, well, no best-selling book series we’re aware of. Yet.

Yesterday, Albert the Great proved greater than Leo the Great 54% to 46% in a matchup between two great saints.

Also yesterday, Tim and Scott shared another epic episode of Monday Madness. You can watch it here, but know that we’re disappointed in you. Fortunately you can redeem yourself by watching this week’s episode and waiting with an expectant heart for next week’s version. 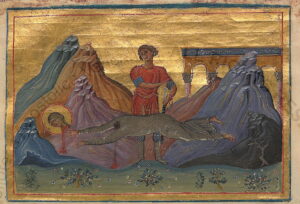 Hermione was a saint of the second century who had an ability to both heal people—and avoid martyrdom.

According to church tradition, Hermione was one of the daughters of Philip, the deacon. She and her sisters had the gift of prophecy and were Christians from an early age. We know nothing about her childhood, but we know that when she became an adult, she and her sister Eutychia set out from Caesarea in Palestine to Ephesus, to seek out the apostle John to study with him.

Upon arrival, they discovered that John had died, so they studied instead with Petronius, a disciple of Paul’s. From Petronius, Hermione learned about healing and began to minister to the sick of the city. Meanwhile, the emperor Trajan came to town on his way to battle the Persians. Encountering Hermione, he ordered her to renounce Christianity, but she refused. He ordered her to be hit in the face for hours on end. By all accounts, she withstood this undeterred because she had a vision of Jesus sitting enthroned in front of her, encouraging her. Seeing that she would not renounce her faith—and not wanting to be late for his war—Trajan finally let her go.

Hermione decided this would be a great time to start setting up hospices in Ephesus—a place that was half-hospital, half-hotel, where people could receive both spiritual and physical nourishment. She carried on her hospice work with vigor until the next emperor, Hadrian, came to town. He, too, decided to try his luck with Hermione and demanded she recant her faith. When this didn’t work either, he ordered her to be boiled alive in a cauldron of boiling lead, tar, and brimstone. But one did not simply boil Hermione; an angel appeared and scattered the coals so that the cauldron went cold. Enraged, the emperor came forward and touched the cauldron to see if it had gone cold. (He burned his hand off.)

Not being one to take a hint, Hadrian ordered Hermione to be roasted on something like a big iron skillet. This also didn’t work. He then told two servants to go and chop her head off. When they tried, their hands withered, and beholding the miracle, they immediately converted themselves. Hadrian declared defeat, and Hermione died of natural, non-martyrdom causes in 117.

Collect for Hermione
Almighty God, whose will it is to be glorified in your saints and who raised up your servant Hermione to be a light in the world: Shine, we pray, in our hearts, that we also in our generation may show forth your praise, who called us out of darkness into your marvelous light; through Jesus Christ our Lord, who lives and reigns with you and the Holy Spirit, one God, now and for ever. Amen. 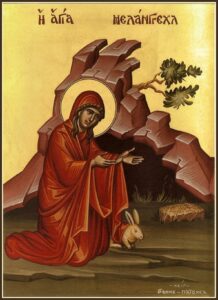 A poem penned in 1723 in the registry of the Welsh church named for Melangell reads: “Melangell with a thousand angels triumphs over all the powers of evil.” Also hunters, as her story goes.

Melangell was the daughter of a sixth-century Irish monarch, as recorded in the book Tours of Wales. When her father attempted to marry her off to a nobleman in his court, Melangell, who wanted to pursue a life of prayer and solitude, fled Ireland. She found sanctuary deep in the Berwyn Mountains in what is now Wales, where she lived as a hermit for fifteen years.

Enter the hunter in our tale, the prince of Powys. While hunting a hare, the prince chased the animal into a “great thicket,” where he was surprised to find instead “a virgin of surpassing beauty.” It was Melangell, deep in prayer, with the hare seeking sanctuary beneath her robe. The prince’s hunting dogs retreated, howling. Impressed by the hermit’s courage and devotion, the prince not only let the hare go free, but he also gave the land to Melangell to be “a sanctuary to all that fled there.”

Melangell founded an abbey on the land, where she remained abbess until her death. Her small religious community ordered its life around prayer and works of mercy, providing sanctuary to all creatures in need. Even the hares. After her death, she became known as patron saint of the hares and other small animals who continued to come to her. The hares became known in Welsh as “Wyn Melangell”—or St. Melangell’s lambs. Centuries later, the Tours of Wales recounted, hunters still refused to kill hares in the parish.

Today, the land remains a sanctuary, ringed by trees estimated to be more than 2,000 years old. Some consider it a “thin place,” where Celts believe heaven and earth seem especially close. The Shrine Church of St. Melangell calls it “a place beyond words and far from the rush of twenty-first-century life; a place where God speaks in the silence and where all people have an opportunity to experience a sense of the holy.”

Anglican, Catholic, and Orthodox pilgrims visit the shrine, where bones that are believed to belong to the saint were discovered beneath the floor in 1958. Melangell is remembered on May 27.

Collect for Melangell
O God, whose blessed Son became poor that we through his poverty might be rich: Deliver us from an inordinate love of this world, that we, inspired by the devotion of your servant Melangell, may serve you with singleness of heart, and attain to the riches of the age to come; through Jesus Christ our Lord, who lives and reigns with you, in the unity of the Holy Spirit, one God, now and for ever. Amen.

At about 8:30 p.m. EST, the Lent Madness Voter Security Unit noticed 389 bogus votes for Hermione. These votes were removed, and the suspect addresses were blocked. This is a reminder. Do not cheat. Vote once. Get your neighbors to vote. But don’t vote several times, lest you be cast into the outer darkness of Lent Madness.

221 Comments to "Hermione vs. Melangell"