Hey, look! You survived the first round of the Elate Eight and have returned for more Saintly Kitsch. Kudos to you! Yesterday, in a hotly contested battle, Benedict the Moor narrowly defeated Camillus de Lellis 52%to 48% to nail down the first spot in the Faithful Four. 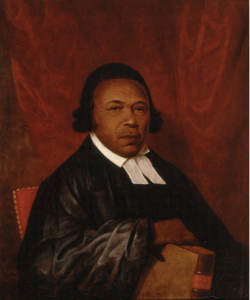 When it comes to kitsch on Absalom Jones, keep an open mind and a loving heart for all the renditions of brother Absalom.

You’re likely very familiar with this portrait by Raphaelle Peale, who was the son of Charles Willson Peale, an American painter. W. R. Jones & John Boyd made an engraving this rendition based on Peale’s painting.

You can find Absalom Jones stained glass windows in St. George’s Church in Dayton, Ohio. They explain the symbolism in the window as a reflection of Jones’s rejection of slavery as an American man who achieved many vital firsts in the church and the community. Willet Stained Glass created the window. Forward Movement featured another window from St. George’s on our August, September, October 2020 covers of Forward Day by Day and Adelante Dia a Dia.

This pitcher, created in 1808, includes a silhouette of Jones with Masonic symbols and is believed to commemorate the tenth anniversary of the first African American Masonic order. Co-founded in 1798 by Absalom Jones, he was named First Worshipful Master, and in 1815 he was elected the First Grand Master of the First African Grand Lodge of Pennsylvania.

A blog appropriately named Unrecognized Revolutionaries included a post by then-fifth grader Laila H. with her drawing of Jones. Shout out to that teacher for what looks like an excellent project for those students. When we see images like these and many others I’ve seen, we can celebrate the spirit of the artists’ intention in their portrayals of Jones’ image. 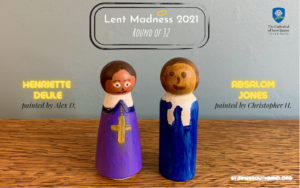 Closest to my heart is this peg doll of Absalom Jones painted by Christopher H. at The Cathedral of Saint James in South Bend, Indiana, as part of their beautiful collection of all of the Lent Madness saints for this year. I’m blown away by this level of commitment and inclusion! Visit their Facebook page to see all the saints and get a glimpse of the diversity represented in God’s holy people.

You can find Absalom Jones t-shirts, icons, and acrylic blocks, but you have Google for that. 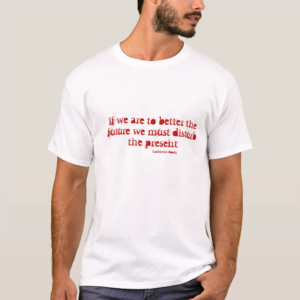 Well, hello! Come in, my friend, come in, sit down, make yourself comfortable. I’m sure you’re oh, so tired after your long journey to my door. Settle down, relax, I’ll just hang your coat right here…

Wait, what’s that? I’m curious about your t-shirt. It has a wonderful quotation from Catherine Booth on it, and you might not know this, but I’m quite the fan. “If we are to better the future, we must disturb the present” is indeed one of her better known sayings. But, I have to ask, what will it take for you to disturb the present typeface on that shirt? I’m not saying Comic Sans would be more tasteful, but, you know… well… ok, fine, I am saying it. Perhaps if you want to better the future, you should disturb the typeface, especially before you spend $18.45 on Zazzle. 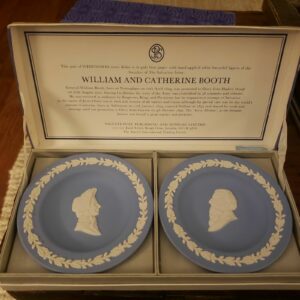 Here, I’m sure you’d love something to eat, it’s been a long day after all. Catherine Booth, together with her husband, fed the hungry working masses in London – a tradition that continues in the Salvation Army to this day. In her honor, I’ve made you some crumpets and tea, and I’ll serve them on this exquisite Wedgewood Sweet Dish set featuring her visage.  I suspect you might find more of them for $26.99 on eBay. They’re an exquisite pale blue jasper, with “hand applied white bas-relief figures” of both General William Booth and Army Mother Catherine Booth, and I think there’s no better way for us to show admiration for their lives of discipleship then by eating crumpets from a plate with their faces on it. 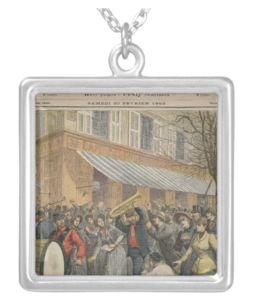 Wait, what’s that? You say my crumpets are upsetting your stomach? Well, that’s nothing compared to the opposition that Catherine Booth received to her place as a trailblazing woman preaching the gospel, or the general opposition the work of the Salvation Army received. Have I shown you this delicate piece I inherited from my family. It’s a silver-plated locket with… an illustration of an uprising against the work of the Salvation Army? What kind of sick people are my relatives to frame this business? Catherine said the gospel would spur opposition, but I… don’t think she sought it out. I can hardly believe they bought this for $31.65 on Zazzle, taking up to 15% off with discount code ZWEDDINGPLAN. 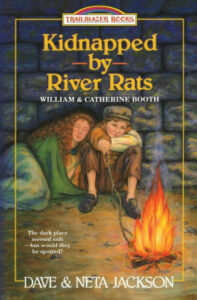 Wait, you’re heading for the door? You have to leave now? To vote for Catherine in Lent Madness? Very well, then, very well.

Before you go, here, let me give you some reading material as you go. It’s one of my favorite works of fiction, Kindnapped by River Rats: William and Catherine Booth. Jack and Amy come to London searching for their uncle without anything – and “attempting to live on the streets is frightening, dangerous, and an opportunity for the worst elements of the city to take advantage of them” Where can they find safety? Can the General and Catherine Booth be trusted to care for them? I won’t spoil the ending, my friend. But let’s just say that, you won’t be surprised.