Welcome to the Faithful Four! From an initial field of 32 saints, we have sliced the field down to four saints. Only one of whom will be crowned with the 2021 Golden Halo. It’s all comes down to Benedict the Moor, who faces Ives of Kermartin today and Catherine of Genoa, who squares off against Absalom Jones tomorrow. Then on Spy Wednesday, the two remaining titans of faith will compete for the ultimate prize, with the winner being announced at 8:00 am Eastern time on Maundy Thursday.

To get to this round, Benedict defeated Nino of Georgia, Euphrosyne, and Camillus de Lellis. While Ives took down Jacapone da Todi, Dunstan, and Arnulf of Metz.

After learning about our saintly heroes via basic bios, quirks and quotes, and even kitsch, in this round, we let our remaining Celebrity Bloggers loose as they answer the question “Why should Saint XX win the Golden Halo?” In other words, they’ve been charged with letting us know why their particular saint is so awesome. We have also invited them to share their two favorite images of their saints. 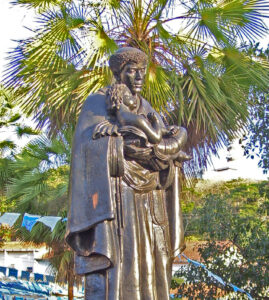 When it came time to choose who I would advocate for this year, Benedict of Palermo (Benedict the Moor / African) practically jumped off the page.

Here was a man of African descent, raised in a European community as a racial and ethnic minority. A man who endured hardship, mocking, and discrimination because he did not look like the people around him.

And yet, Benedict found his way.

He found a way to be more than an exception or an outlier. He became a valued member and leader in his community. Benedict was elevated to Superior of his community and served admirably as a leader. In other seasons, he took his place alongside his brothers as equals. He found a way in which he was able to participate in the beloved community – not a token or a curiosity, but valued for the practical talents and spiritual gifts he brought.

Benedict found his way as he turned away from resentment and toward service. Whether cooking for his brothers or healing a traveler or consoling a widow, Benedict’s gifts made every community he participated in better. His life of prayer stirred him to compassion for all who suffered. In our world today, we need more of Benedict’s way of compassion and service.

Benedict found a way to use his heart and his hands – his faith and his action – to give witness to what the life of discipleship looks like. Meditating in the hermitage and cooking for visitors, praying in the room and healing from the bushes. In our world today we need Benedict’s way of active contemplation and contemplative action.

And then, Benedict found a way to remind us of humanity. As the world debated the humanity and belovedness of persons of African descent, Benedict’s legacy shone brightly as a refuation of those who would deny the humanity of enslaved Africans. Here stood Benedict – intelligent and compassionate, capable and insightful – the opposite of every 19th century white/European depiction of Africans. In our world today we need Benedict’s way to remind us of the folly and error of denying the full humanity of our siblings.

Following a pandemic and numerous Civil Rights moments; following generations of quietism and the separation of our 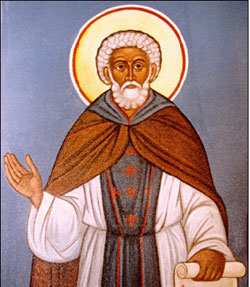 faith from our public lives; following a vile heritage of enslavement, Jim Crow, redlining, and mass incarceration, we need to find our way. Let us look to Benedict and his way of service, humility, prayer, and dignity.

One more legacy of Benedict remains. Jutting out into the Mediterranean, the island of Sicily is a natural landing place for immigrants. There, in the middle of a global crisis of migration, the town of Palermo has become a place of welcome, refuge, and safety for African migrants. Towering over the soccer fields in Palermo where the children of immigrants play, a giant mural of Benedict the African smiles and offers his blessing. 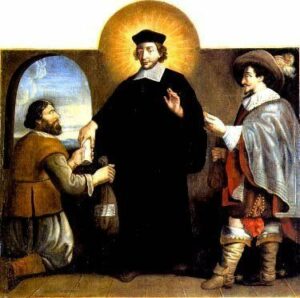 Throughout this Lent Madness season, I learned a lot about St. Ives. I had a passing familiarity with him through the St. Ives celebration honoring legal professionals sponsored by the Diocese of New York.

My research into St. Ives proved the impact of his service to society over the past 700 years. As I delved into his life, ministry and contributions, I was impressed with his quiet leadership, his refusal to give up, his arms ever extended to the poor and downtrodden, his deep devotion to living his faith, his lifelong perseverance and temerity.

He was a priest. He was a lawyer.  He was exemplary in both.

He is the patron saint and a guiding star to the legal profession, which honors him worldwide.

I was touched by his dedication to helping the disadvantaged, defending the poor, never turning his back on the needy and destitute, and his commitment to representing the underprivileged, in both civil courts and in church courts.

He braved new frontiers in his legal endeavors. As the “bishop’s judge,” he took this role seriously.

His was not a glossy life.  Ives never sought the spotlight. He donated all his earnings to help the poor.

In a time when it was common to take bribes, Ives refused.

In a time when much of the populace was poor and downtrodden, Ives defended them, often pro bono.

I was struck with the words of Pope John Paul II in 2003, calling Ives “a figure who was able to combine a social role 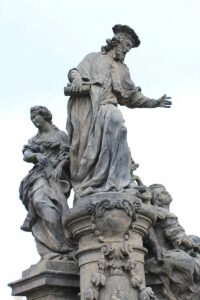 and an ecclesial mission, drawing from his spiritual life the strength for action and for the unification of his being.”

The pope aptly saw Ives as “someone who devoted his whole life to serving Christ in serving the poor, as a magistrate, lawyer, and priest. St. Ivo was involved in defending the principles of justice and equity.”

An image of Ives says it all. He is often depicted with a money bag, representing his donations to the poor, and a scroll, signifying the law.

I learned a lot about St. Ives during this Lent Madness season. And I am thankful for his enduring example of fairness and faith.

79 Comments to "Benedict the Moor vs. Ives of Kermartin"