Finally! We've nearly made it to the end of the Round of 32. But not before we take care of today's saintly business, the highly anticipated Battle of the Deli Meats. Take a number and get ready to cast your vote between two 15th century saints, Catherine of Bologna and Catherine of Genoa. Anybody hungry for an Italian sub?

Yesterday, in the penultimate matchup of the first round, Ives of Kermartin routed Jacapone da Todi 77% to 23%. No word yet on whether Jacopone will appeal the decision. 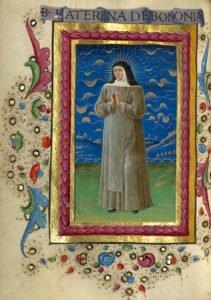 If Advent is—as some have called it—a “little Lent,” you’ll want to remember this saint in your nativity scene later this year. After all, it was Catherine of Bologna who the Virgin Mary asked to hold baby Jesus, not the little drummer boy.

Born Catherine de’Vigri in 1413, in Bologna, Italy, Catherine joined her father in the court of Ferrara as a companion to the Marquis of Ferrara’s daughter, Margaret d’Este. There, Catherine was educated alongside Margaret, learning to read, write, and paint. Catherine also felt called to religious life.

At thirteen, she joined a semi-monastic community of women following an Augustinian rule in Ferrara—but that didn’t last long. The community split over whether to continue following the Augustinian rule or adopt a more austere Franciscan rule. In the end, Catherine and several others founded a convent of the Order of Poor Clares, following the first rule created by a woman, Saint Clare of Assisi. Like the order founded by her companion, Saint Francis of Assisi, the order named for Clare emphasized poverty. Later, Catherine was invited to become abbess of another new convent in Bologna.

As a nun, Catherine continued to paint, even illustrating her own breviary with portraits of the saints and about 1,000 prayer rubrics. She also wrote her most famous treatise, The Seven Spiritual Weapons Necessary for Spiritual Warfare. She wrote, “Whoever wants to go to God through sweetness and consolation is deceived.” She also detailed several visions, including seeing Mary place her infant “graciously and with great kindness” into Catherine’s arms.

During Lent 1463, Catherine became ill and died. People visiting her grave reported a sweet scent and miracles they attributed to her intercession. Her body was exhumed eighteen days later, discovered incorrupt, and placed in the chapel of the Poor Clares in Bologna. There, you still can find her, dressed in her habit and sitting on a golden throne.

Catherine was canonized as a saint by the Roman Catholic Church in 1712. Her feast day is March 9, and she is the patron saint of Bologna (the city, not the lunchmeat), artists, liberal arts, and against temptations.

Collect for Catherine of Bologna
Almighty God, who gave to your servant Catherine special gifts of grace to understand and teach the truth as it is in Christ Jesus: Grant that by this teaching, we may know you, the one true God, and Jesus Christ, whom you have sent; who lives and reigns with you and the Holy Spirit, one God, for ever and ever. Amen. 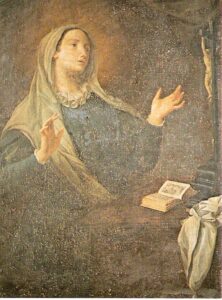 Catherine of Genoa (1447-1510) came from a life of luxury, but her path veered from her noble upbringing and toward the heights of heaven itself.

Growing up in a family connected to two popes, Catherine heard the call of God early in her life. At the age of thirteen, she attempted to enter a convent and become a nun but was denied because of her age. Her life then followed a well-trod path for women of her time and station: she entered into a marriage of political convenience.

Catherine’s marriage was a train wreck, and her husband was a louse. Catherine was forced to endure his financial irresponsibility and infidelity, even as she remained childless. Continually hurt by her marriage, Catherine sought escape in pleasure and indulgence. Then at the age of twenty-six, after ten years of unhappy marriage, everything changed for Catherine. While in confession, Catherine experienced a mystical vision of God. Thereafter, Catherine continued to experience an inner relationship with God—directly communing with the divine without many of the formal institutional structures of religion and spirituality of the time. In addition, she took up the rare practice of receiving the sacrament of Holy Eucharist daily.

Catherine described her relationship with the divine in her Dialogues on the Soul and the Body, and her writings and visions influenced generations of mystics. She said, “On your part (God), you will grant your pure love, which will extinguish all other loves in me and will annihilate me and busy me so much with you that I will have no time or place for anything or anyone else.”

Meanwhile, Catherine’s husband declared bankruptcy. As he hit rock bottom, he discovered a new relationship with God. Together, Catherine and her husband began work with the poor and sick of Genoa. In 1478, at the beginning of a terrible four-year spike of the plague in Italy, Catherine and her husband moved into the hospital in Genoa. They not only cared for the sick, but also they lived among them. Catherine was so devoted to this work that she eventually was made manager and treasurer of the hospital.

Catherine’s deep spirituality and the physicality of her service to those in need stand as an example to all who seek to remain connected to the divine while living out our faith on this earth.

Collect for Catherine of Genoa
Gracious God, reveal to your church the depths of your love; that, like your servant Catherine of Genoa, we might give ourselves in loving service, knowing that we have been perfectly loved by you; through Jesus Christ our Lord. Amen.