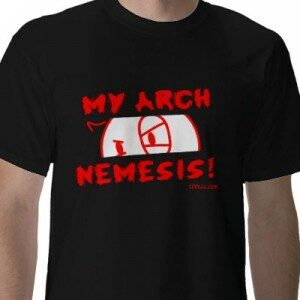 Followers of Lent Madness will be relieved to know that, with the assistance of round-the-clock mediation, Tim and Scott have pledged to bury the hatchet for the duration of Lent. Upon reflection, they concluded that to remain each other's archnemesis would be counterproductive to the spirit of Lent Madness (despite the presence of competition and martyrdom). Plus, it made the meetings of the Supreme Executive Committee of the Province of the Society of Lent Madness too laden with drama.

The statement below has been jointly released on their respective blogs "Clergy Family Confidential" (Tim) and "Seven whole days" (Scott). We trust this will come as good news to all involved. In fact, you can show your support by "Liking" Lent Madness on our Facebook page.

"Be it known to all present, either bodily or online, that as of Ash Wednesday in the two thousand and twelfth year of our Lord, certain persons, of necessity in the present time, are hereby setting aside a designation of Archnemesis, and laying aside the enmity that has existed from the beginning, until the end of the Lenten Fast. Whereas, to cooperate on Lent Madness for the edification of all Christendom, Father Schenck and Father Gunn shall thereby set aside their feud until the New Fire is lit at the Great Vigil of Easter. After that, anything is possible."