Today’s matchup is a battle between two learned gentlemen separated by 14 centuries. While both were great linguists, one sat around translating Scripture and became a hermit (Jerome) while the other went to New Zealand to become a bishop and martyr (Patteson). So, would you rather be a hermit or a martyr? Or a martyred hermit for that matter? 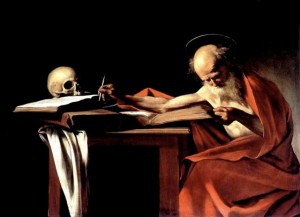 Rome is where Jerome lived as a student and was baptized as a Christian. He became a hermit (i.e., someone who retreats for religious reasons into a solitary life) for a period of four or five years in the Syrian desert. Leaving behind that solitude, he was later ordained a priest and became secretary to Pope Damasus from 382 to 384. During those same years, at the Pope’s request, Jerome revised the existing translations of the four gospels.

Finally, in 386, Jerome settled in Bethlehem, belonging to a monastery and devoting himself to a life of study. There he continued his work, begun in Rome, producing numerous biblical translations. After his death, these would be collected into a single Bible, the Vulgate, probably in the 6th century. For more than a thousand years, the Vulgate was the definitive biblical text of Western Christianity.

Collect for Jerome: O Lord, O God of truth, your Word is a lantern to our feet and a light upon our path: We give you thanks for your servant Jerome, and those who, following in his steps, have labored to render the Holy Scriptures in the language of the people; and we pray that your Holy Spirit will overshadow us as we read the written Word, and that Christ, the living Word, will transform us according to your righteous will; through Jesus Christ our Lord, who lives and reigns with you and the Holy Spirit, one God, now and for ever. Amen. 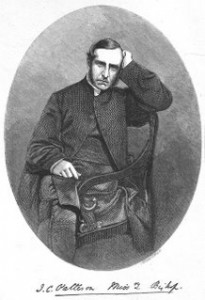 John Patteson (1 April 1827 – 20 September 1871) was the elder son of Sir John Patteson the judge, by his second wife, Frances Duke Coleridge. He was educated at a private school in Devon and then at Eton. He was a good student and sportsman. He was also deeply religious. In 1845 he went to Oxford where he was influenced by the Oxford Movement. He studied briefly in Germany. There he became competent in Hebrew and Arabic and showed his outstanding flair for languages. Ordained deacon in 1853 and priest the following year, he offered himself to Bishop Selwyn for work in Melanesia. He arrived in New Zealand in 1855. Two years later he was put in charge of the Melanesian Mission. He founded a college on Norfolk Island for native boys, toured the islands on the ship Southern Cross, and learned more than twenty of the local languages.

On 24 February 1861 Patteson was ordained as the first Bishop of Melanesia.

Travel in Melanesia was always risky, and Patteson’s life was often in danger. His health suffered in the 1860s. On 20 September 1871 Patteson was murdered on the island of Nukapu. Joseph Atkin and Stephen Taroaniara, who accompanied Patteson, died a week later of wounds received at the time. It was widely believed that Patteson’s death was in retaliation for the “slave” trading, but this is by no means certain. Patteson’s death did however ensure more rigorous regulations on labour trading, and gave strong impetus in England to the missionary work of the church.

Collect for John Patteson: God of the southern isles and seas, we remember with thanksgiving your servant John Patteson, whose life was taken by those  for whom he would freely have given it; grant us the same courage in extending your gospel  and readiness to share our life with others, for the sake of Jesus Christ our Redeemer, who is alive with you in the unity of the Holy Spirit, one God, for ever and ever. Amen.

52 Comments to "Jerome vs. John Patteson"

1 Trackback to "Jerome vs. John Patteson"