Well, friends, after all the hype and all the anticipation and all the pageantry of the opening ceremonies (oh, did you miss that? Madonna sang "40 Days and 40 Nights"), Lent Madness 2012 is now upon us. Our first match-up is between a learned bishop and a young peasant girl born nearly 150 years apart. Sounding incongruous? Welcome to the beauty, intrigue, and mystery of the Lent Madness bracket.

The fate of these two saints is now in your hands with the winner destined to take on the victor of John Huss vs. Mary Magdalene in the Round of the Saintly Sixteen. But that's getting way ahead of ourselves. Today, your task is to vote wisely and encourage everyone you know to get in the Lent Madness game. 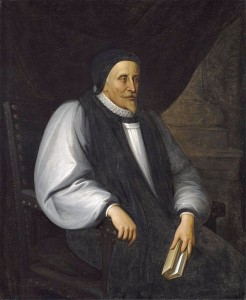 Lancelot Andrewes (1555 - 1626), Bishop of Chichester, Ely, and later Winchester, is perhaps best known as the lead translator of the Old Testament books Genesis through 2Kings in the Authorized Version of the Bible (also known as the King James Bible because it was commissioned by King James I in 1604). An exceptionally learned man who mastered fifteen modern European languages in addition to six ancient ones, Andrewes was also a celebrated preacher who enjoyed the privilege of preaching Christmas (and other) sermons before Queen Elizabeth I and later King James I. At the same time, Andrewes was known to spend several hours a day in prayer. More than twenty years after his death, his private devotions - a collection of Scripture, thoughts and prayers written in Greek and Hebrew - were finally translated and published, and they are still in print.

Andrewes’ scholarly work was described by one biographer as “a coat of mail, strong but mobile.” His sermons earned him the description as “the star of preachers” and an “angel in the pulpit,” although Puritans disliked his frequent references and quotes in Latin and modern ears might find his manifold use of puns and wordplay odd at best and off-putting at worst. See, for example, his riff on Immanuel (God with us) and Immanu-hell (us without God) and Immanu-all (the happy result of the Nativity) preached on Christmas of 1614. His prayer life included the remembrance of whales, as evidenced by his Thursday prayers based on the Fifth Day of Creation from Genesis. Among Bishop Andrewes’ friends were George Herbert and Richard Hooker, and his feast day is celebrated on September 25th.

Collect for Lancelot Andrewes: O Lord and Father, our King and God, by whose grace the Church was enriched by the great learning and eloquent preaching of your servant Lancelot Andrewes, but even more by his example of biblical and liturgical prayer: Conform our lives, like his, to the image of Christ, that our hearts may love you, our minds serve you, and our lips proclaim the greatness of your mercy; through Jesus Christ our Lord, who lives and reigns with you and the Holy Spirit, one God, now and for ever. Amen.

Joan of Arc (1412 - 1431) is the patron of France and of soldiers. Born to peasant parents in the village of Domremy, Joan (or Jehanne, as she signed her name in French) began to hear the voices (and sometimes see some kind of vision) of St Michael, St Catherine and St Margaret when she was thirteen. At first, they simply urged her to develop her piety but eventually began to direct her to become involved in the struggle to bring Charles, son of King Charles VI, to the contested French throne.

Obediently, 17-year old Joan traveled to the French court, took on male attire, and persisted in making her way through the layers of bureaucracy by predicting the outcome of certain military operations and then by recognizing the king in his disguise. She convinced him to allow her to command an army, and using a sword that had been buried behind the altar of St Catherine de Fierbois, she led her army to a spectacular victory over the English at Orleans. Charles’ supporters were reinvigorated by the inspiration of this armored Maid of Orleans, and after a string of victories, Charles was crowned at the Cathedral in Rheims with Joan in attendance.

She laid down her arms on the altar of St Denis after being shot through the thigh with a crossbow but went back to the field one more time. At Compegnie, Joan was trapped outside the castle, dragged from her horse, and promptly sold to the English with no intervention by Charles. Held in a secular prison guarded by English soldiers, she continued to wear male clothing for protection. The Inquisition was called in.

After nearly five months of testimony, beginning with charges of witchcraft and ending with a conviction of engaging in cross-dressing, Joan was condemned a heretic at nineteen, and she was burned at the stake in Rouen on May 30, 1431.  A new trial by the Church in 1450 overturned her conviction and declared Joan to be a martyr. She was canonized (declared a saint) in 1920 by Pope Benedict XV, who called her a “most brilliant shining light” of God. Her story has been the subject of hundreds of books, plays, musical compositions, and art.

84 comments on “Joan of Arc vs. Lancelot Andrewes”