Catherine of Siena vs. Emma of Hawaii

Today's match-up is fraught with intrigue as two popular women from fabulous vacation spots duke it out for the right to advance to the Round of the Saintly Sixteen. If you were smart, you conducted some intense personal research by traveling to both Siena, Italy, and Honolulu, Hawaii, before the start of Lent Madness. If not, now is the time to lobby your travel agent for a 2013 Lent Madness vacation package.

In recent action, John Cassian coasted to victory over James Lloyd Breck (55% to 45%), making you wonder why Nashotah House graduates aren't more passionate about Lent Madness. Perhaps all that Tebowing (what we used to call genuflecting) distracted them from the task at hand. In any case, view the updated bracket and the calendar of upcoming match-ups and enjoy today's Lent Madness all-female revue. 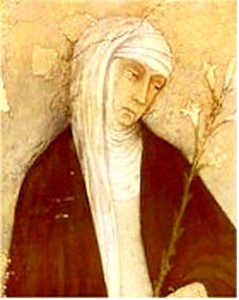 Catherine of Siena (1347-1380) was a 14th century mystic, visionary, Dominican tertiary, and theologian. She’s best known for being an articulate critic of political battles among clergy within the Roman Catholic Church. Appalled by factional fighting that resulted in the Avignon papacy, she persuaded Pope Gregory XI to return to Rome and reform the clergy. When the next Great Schism broke out in 1378, Pope Urban VI demanded that Catherine come to Rome as his advocate.

In the midst of all this, Catherine experienced a “mystical marriage” with Jesus, received the stigmata, and found time to dictate a book of meditations and revelations, The Dialogue of Divine Providence. More than 300 of her letters to confessors, royalty, and church officials have survived over the centuries. Interestingly, 1/3 of her surviving letters were written to women.

Catherine was drawn to faith at an early age, having her first vision of Christ blessing her when she was five and vowing chastity at the age of seven. She died in 1380 at the age of 33 (by tradition, the same age as her Lord). She was canonized in 1461 and received the title of Doctor of the Church in 1970, one of the few women to ever receive this honor.

Collect for Catherine of Siena: Everlasting God, you so kindled the flame of holy love in the heart of blessed Catherine of Siena, as she meditated on the passion of your Son our Savior, that she devoted her life to the poor and the sick, and to the peace and unity of the Church: Grant that we also may share in the mystery of Christ’s death, and rejoice in the revelation of his glory; who lives and reigns with you and the Holy Spirit, one God, now and forever. Amen. 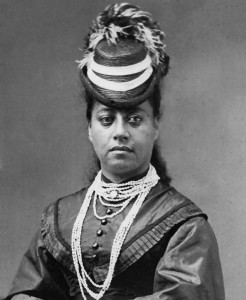 Still revered by Hawaiians as “our beloved Queen,” Emma Kalanikaumakaamano Kaleleonālani Naʻea Rooke, or Queen Emma for short, was born to a royal family with direct lineage to King Kamehameha I. At 20 she married King Kamehameha IV with whom she shared a love for the Anglican church and its liturgy.  In 1860, shortly after the birth of their son, the couple petitioned the Bishop of Oxford to send missionaries to establish the Anglican Church of Hawaii.

The Church of England was happy to oblige and soon dispatched a bishop and two priests to those pleasant shores. Unlike monarchs before her, Emma was a hands-on royal who commenced building a school for Hawaiian girls and St. Andrew’s Cathedral in Honolulu. Her deep concern for the well-being of her people, who had been ravaged by smallpox, was seen in the establishment of what would become Queen’s Medical Center. Today it is the premiere medical facility for the Pacific basin.

The personal tragedy of losing both her four-year-old son and her beloved husband in a 15-month span did not stop Emma from endeavoring on behalf of her people. To assume the throne after her husband’s death, Emma was required to enter Hawaii’s constitutionally-mandated election process. Though the Hawaiian people supported her candidacy, her opponent won a landslide victory in the Legislative Assembly. In the wake of this upset, her supporters rioted but were quickly quelled by the presence of American warships in the harbor.

Over the next 22 years, to the end of her life at age 49, the dowager queen remained steadfast in her faithfulness to the Church of Hawaii and her people. Comfortable in her identity as a descendant of both Hawaiians and Europeans, she was multi-cultural before it was cool. Her holy example and legacy of charity live on across the islands and beyond.

Collect for Kamehamha IV and Emma: O Sovereign God, who raised up Kamehameha and Emma to be rulers in Hawaii, and inspired and enabled them to be diligent in good works for the welfare of their people and the good of your Church: Receive our thanks for their witness to the Gospel; and grant that we, with them, may attain to the crown of glory that never fades away; through Jesus Christ our Savior and Redeemer, who with you and the Holy Spirit lives and reigns, one God, for ever and ever. Amen.

Catherine of Siena vs. Emma of Hawaii

88 comments on “Catherine of Siena vs. Emma of Hawaii”