James the Apostle vs. Dietrich Bonhoeffer

Today we get another one of these intriguing match-ups between a Biblical figure and a 20th-century theologian and martyr. The last time one of Jesus' inner circle appeared in Lent Madness, Thomas went down to defeat at the hands of Enmegahbowh. Will James, this "Son of Thunder," survive or will he be struck down by Bonhoefer's lightning?

In yesterday's oedipal action, Monnica (mom) defeated Augustine (son) 56% to 44%. Therapy will ensue. Check out the updated bracket and, if you're wondering about upcoming matches, view the complete calendar. 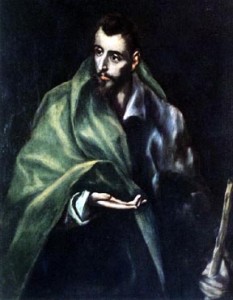 James was one of Jesus’ three disciples who formed the inner circle within the twelve. Along with his (probably younger) brother John and Peter, James witnessed the Transfiguration and the raising of Jairus’s daughter. He also fell asleep several times when he was supposed to be up watching and waiting while Jesus was agonizing in the garden before his arrest.

Jesus gave this inner circle of disciples names that would now be appropriate for modern wrestlers. Peter was nicknamed “The Rock,” and James and John were “The Sons of Thunder” (good for a tag team bout, yes?). This nickname probably came from their quick tempers, which may have led to James being the first of the twelve to be martyred. The Acts of the Apostles records: “About that time King Herod laid violent hands upon some who belonged to the church. He had James, the brother of John, killed with the sword” (12:1-2).

While James (known as “the Greater” to distinguish him from the other men named James), has a prime place among the disciples, he has very little dialogue in the Gospel to show for it. Nowhere does James say anything by himself, and only in a few places do he and John speak together. Rather than taking the role of voice as does Peter, James’ primary role seems to be one of witness and friend. One of the four original fishermen, James was among the first to leave the fishing nets and follow Jesus, meaning he was around for the entirety of Jesus’ public ministry.

The tradition surrounding James says that his body found its way to Spain (where some dubious accounts say he ministered before his beheading), where he became a patron saint. In Spain, he is known as Saint Iago, whence comes the name “Santiago.” Saint James’ shrine in Compostela has been one of Christendom’s most important sites of pilgrimage for well over a thousand years.

Collect for James the Apostle: O gracious God, we remember before you today your servant and apostle James, first among the Twelve to suffer martyrdom for the Name of Jesus Christ; and we pray that you will pour out upon the leaders of your Church that spirit of self-denying service by which alone they may have true authority among your people; through the same Jesus Christ our Lord, who lives and reigns with you and the Holy Spirit, one God, now and for ever. Amen. 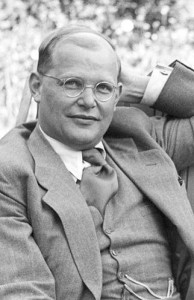 Dietrich Bonhoeffer (1906-1945) studied at the universities of Berlin and Tübingen and earned his doctorate in theology at the age of 21. He did postdoctoral work at Union Theological Seminary in New York City (1930-1931), arriving there one year after the stock market crash that signaled the beginning of the Great Depression. At the same time that he was seeing long lines of unemployed workers and the cardboard shacks of the homeless, his family was writing letters to him with news from Germany about growing unemployment and gains by the Nazi Party in recent elections.

Bonhoeffer became good friends with an African-American seminarian named Frank Fisher, who introduced him to the African-American community in Harlem and the vibrant worship of its churches. The extent of racial discrimination and segregation in the United States was shocking to Bonhoeffer, whose oldest brother had declined an offer to teach at Harvard University because of it. Seeing things from below, from the perspective of those who suffer, would prove to be more relevant to his future at home than he could possibly have imagined at the time.

He was ordained and eventually became a leader of the Confessing Church, comprised of German Christians opposed to the attempt of the Nazi Party to reshape Protestant Christianity in its own racist image. His books Life Together and The Cost of Discipleship, which have become spiritual classics, arose out of his experiences as the leader of an underground seminary from 1935 until the Gestapo closed it in 1937.

Bonhoeffer was also a member of the failed conspiracy to assassinate the Nazi Führer Adolf Hitler on July 20, 1944. Bonhoeffer had struggled not only with the obligation “to bandage the victims under the wheel” of injustice but also with the possible necessity to jam “the wheel itself.” One biography of him described this as “a long and lonely road.”

He was executed at the Flossenbürg concentration camp only a month before Germany’s unconditional surrender at the end of Word War II. His final words to a fellow prisoner, “This is the end – for me the beginning of life,” were meant as a message to his dear friend George Bell, a bishop in the Church of England, who had received from Bonhoeffer the names of those involved in the plot to overthrow the Nazi regime in order to pass that information to the British government.

Collect for Dietrich Bonhoeffer: Gracious God, the Beyond in the midst of our life, you gave grace to your servant Dietrich Bonhoeffer to know and to teach the truth as it is in Jesus Christ, and to bear the cost of following him: Grant that we, strengthened by his teaching and example, may receive your word and embrace its call with an undivided heart; through Jesus Christ our Savior, who lives and reigns with you and the Holy Spirit, one God, for ever and ever. Amen.

James the Apostle vs. Dietrich Bonhoeffer

96 comments on “James the Apostle vs. Dietrich Bonhoeffer”