After a week full of major saints and prominent names, we're dialing it back and injecting a small dose of obscurity with this match-up. That's not to say that John Cassian and James Lloyd Breck are lightweights, they just don't have the name recognition of some of the contenders vying for the Golden Halo. Will the monastic carry the day or will he wander around on his hands and knees futilely seeking an oasis in the desert of Lent Madness? Or will Breck, like Philander Chase before him, rally Midwesterners and seminary alumni to his cause?

In yesterday's action, Dietrich Bonhoeffer swept to a resounding victory over the apostle James, leaving members of Jesus' inner circle (Thomas then James) to wonder just where they went wrong. Don't forget to check the the updated calendar of match-ups and the updated bracket. 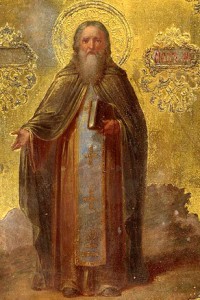 John Cassian (360- c.435), considered a saint  by the Eastern church but never canonized by the Western church, was a Desert Father who championed monasticism as a spiritual way of life. He was a follower of St. John Chrysostom who ended up in Rome as an emissary to Pope Innocent I for that exiled Patriarch of Constantinople.

When invited to establish Egyptian-style monasteries in Southern France, Cassian did so for women as well as men. His writings, Institutes of the Monastic Life and Conferences on the Egyptian Monks greatly influenced St. Benedict whose Rule has shaped Western monasticism for centuries. It is said that Benedict insisted that sections of the Conferences be read aloud to his monks.

Cassian outlined three stages of monastic life. Young monks concentrated upon prayer and ascetic practices in order to take control over the flesh. This period of purgation often lasted years as the monastic came to identify with Christ's temptation in the wilderness. In the next stage, the monk took on a teaching role by encouraging others in the faith, showing hospitality, and becoming connected to Jesus through the Sermon on the Mount. Finally, elderly monks often fled into the desert to obtain union with God through solitude. This last stage saw monks identifying with the Transfigured Christ.

Cassian died in 435 and is recognized in the calendars of the Eastern Orthodox and Episcopal Churches on February 29th -- a date that only arises every four years.

Collect for John  Cassian: Holy and Mighty One, whose beloved Son Jesus Christ blessed the pure in heart: We give you thanks for the life and teachings of John Cassian that draw us to a discipline of holy living for the sake of your reign. Call us to turn the gaze of the eyes of our soul always toward you, that we may abide in your life, shown to us in our Savior Jesus Christ; who with you and the Holy Spirit is one God, living and true, to the ages of ages. Amen. 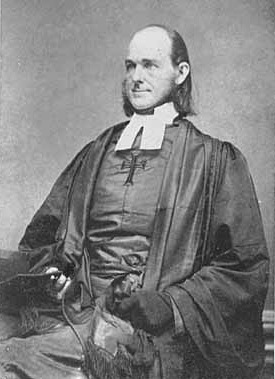 James Lloyd Breck, “the Apostle to the Wilderness,” was an indefatigable establisher of institutions, including Nashotah House and Seabury Divinity School (now Seabury Western)—Episcopal seminaries to this day—as well as the first Native American missions west of the Mississippi and the first Episcopal Schools in California.

Born in Philadelphia in 1818, Breck attended General Seminary in New York.  Responding to the call of Bishop Jackson Kemper (feast day May 24), Breck and two classmates journeyed to the frontiers of Wisconsin in 1841 where they established Nashotah House. In 1850, Breck headed to St. Paul, Minnesota to begin another training institution; when that venture failed, he turned his attentions to establishing missions to the Chippewa and Ojibway (guided by fellow Lent Madness competitor Enmegahbowh). Threats of violence forced him and his family to leave the second mission after only eight months.

Heading to Faribault, Minnesota, he opened a school for Native American refugees, St. Mary’s School for girls, Shattuck School for boys, and Seabury Divinity School. While there, Breck’s wife died, and he later lost everything in a fire. To this he remarked, “I should think it a good time for me to emigrate to the West.”

After a trip East for fundraising and recruitment (Breck was also an amazing fundraiser, sending a constant flow of letters to donors), Breck boarded the Henry Chauncey, along with his children and second wife, and headed to California. There, he established St. Augustine’s College with a boys’ school, a girls’ school, and a theological college, and served St. Paul’s parish, Benicia.

On March 2, 1876, Breck fainted while saying Evening Prayer at the school chapel. He died soon after.  Although originally buried in Benicia, 20 years later his remains were moved to Nashotah House where they are to this day.

Collect for James Lloyd Breck: Teach your Church, O Lord, we pray, to value and support pioneering and courageous missionaries, whom you call, as you called your servant James Lloyd Breck, to preach, and teach, and plant your Church on new frontiers; through Jesus Christ our Lord, who lives and reigns with you and the Holy Spirit, one God, for ever and ever.  Amen.