After a long, painfully slow weekend without Lent Madness (local support groups are cropping up everywhere), we welcome you back to another week of saintly action. Today marks the long-anticipated epic oedipal battle between mother and son — which may just be the definition of Lent Madness!

As one of our Celebrity Bloggers has pointed out, this pairing “suggests a dark, nay, diabolical streak in the hearts of the bracketeers, priests of the Church though they may be.” (Thanks, Heidi. And for that remark, we have given you, a mother of two sons, both sides of this match-up). Nevertheless, the witnesses of Monnica and Augustine of Hippo will stand on their own merits. You, the people, shall decide whether mother or son will advance to the Round of the Saintly Sixteen.

With half the match-ups decided for the Round of the Saintly Sixteen, make sure to check out the updated calendar of future battles as well as the updated bracket. 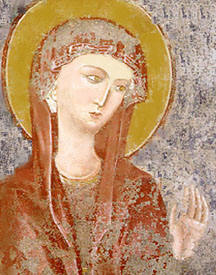 Monnica (c. 331 –  387), born to Christian Berber parents in North Africa, would be unknown to us were it not for her depiction as the persistently devoted mother in her son’s autobiographical “Confessions of St. Augustine.”

Issue from her marriage to a difficult pagan bureaucrat named Patriclius included Augustine, Navigius, and Perpetua. Monnica recognized early on that Augustine was tremendously gifted intellectually and her love for him was manifested in her deep ambition to see him succeed in the world. However, upon deepening her life of prayer and Christian maturity that ambition transformed into a passion to see him convert to Christianity. He scorned her efforts and influence. Ultimately, her quest led her to follow him first to Rome and then to Milan, where he was, after 17 years of prayer and “encouragement,” baptized by Bishop Ambrose on Easter Eve 387.

With travel difficult in the late fourth century, following her son to Rome was no small undertaking. Yet Monnica was a profoundly determined woman whose faith enabled her to boldly act on her deepest hope and conviction.

Augustine and Monnica spent a peaceful six months together before beginning the journey back to Africa. In Ostia, the port city of  Rome, she took ill. Before she died, she said, “You will bury your mother here. All I ask of you is that, wherever you may be, you should remember me at the altar of the Lord. Do not fret because I am buried far from our home in Africa. Nothing is far from God, and I have no fear that he will not know where to find me, when he comes to raise me to life at the end of the world.”  Her work was done.

Collect for St. Monnica: O Lord, through spiritual discipline you strengthened your servant Monnica to persevere in offering her love and prayers and tears for the conversion of her husband and of Augustine their son: Deepen our devotion, we pray, and use us in accordance with your will to bring others, even our own kindred, to acknowledge Jesus Christ as Savior and Lord; who with you and the Holy Spirit lives and reigns, one God, for ever and ever. Amen. 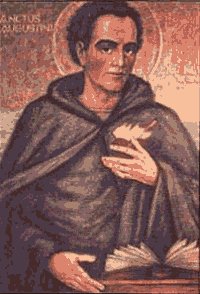 Augustine (354- 430), one of the most influential theologians in all of Christendom, might have easily ended up just another erudite wastrel. Born in Thageste, North Africa in 354, his mother Monnica recognized early his brilliance and leadership qualities and encouraged his studies. She was less successful in curbing his dissolute lifestyle, but more on that later.

At 17 he studied rhetoric in Carthage by the largess of a fellow Roman citizen. He taught first in Thageste and then for nine years in Carthage before moving to Rome to find a more accomplished class of students — which he didn’t. It was then he became the professor of rhetoric at the Court of Milan. It was also in Milan that his mother returned to the scene. Her ambition for Augustine morphed into a deep desire for him to abandon Manichaeism and convert to the Christian faith. Augustine made the acquaintance of Bishop Ambrose and, under his influence, came to see that Christianity was intellectually respectable and was baptized on Easter Eve 387.

Upon returning to Africa he gave away all of his possessions to the poor, with the exception of the family home which he converted into a monastery. He was ordained priest in 391 and Bishop of Hippo in 395, a position he held for 35 years until his death. He was described by his friend and fellow bishop, Possidius, as a man who “ate sparingly, worked tirelessly, despised gossip, shunned the temptations of the flesh, and exercised prudence in the financial stewardship of his see.” Augustine was a gifted orator and a powerful defender of the faith.

However, it is Augustine’s writing that provides his greatest legacy to the church and the world. At least 350 sermons are known to survive and more than 100 titles. His greatest hits include his autobiographical “Confessions,” “The City of God,” and many, many works of apologetics, doctrine, and exegesis. His influence is immensely deep and wide through the entire history of the Christian Church extending to Thomas Aquinas, Bernard of Clairvaux, the protestant reformers, and Eastern Orthodox theologians.

He died in 430 and was soon canonized by popular acclaim. His feast day is August 28.

Collect for St. Augustine of Hippo: Lord God, the light of the minds that know you, the life of the souls that love you, and the strength of the hearts that serve you: Help us, following the example of your servant Augustine of Hippo, so to know you that we may truly love you, and so to love you that we may fully serve you, whom to serve is perfect freedom; through Jesus Christ our Lord, who lives and reigns with you and the Holy Spirit, one God, now and for ever. Amen.

Monnica vs. Augustine of Hippo

126 Comments to "Monnica vs. Augustine of Hippo"