Today in Lent Madness it's a tea drinking mystic vs. the patron saint of stage mothers. Only one of these women will advance to the Round of the Elate Eight to try her hand against Mary Magdalene.

Yesterday, Thomas Cranmer defeated Columba 60% to 40% and will face off against either Emma of Hawaii or Paul of Tarsus. View the updated bracket and prepare for the wild ride yet to come. 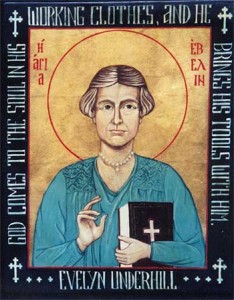 Mystic and theologian Evelyn Underhill (1875-1941) wrote prolifically and influentially about spirituality, including her foundational text Mysticism, published in 1911. She was the first woman allowed to lecture to Church of England clergy and was widely sought after as a lecturer and spiritual director.

In addition to her spiritual works, Underhill also wrote several novels: The Grey World (1904), The Lost Word (1907), and The Column of Dust (1909). In The Grey World, her protagonist says, "It seems so much easier in these days to live morally than to live beautifully. Lots of us manage to exist for years without ever sinning against society, but we sin against loveliness every hour of the day."

She constantly emphasized the importance of beauty and of reality in the spiritual life. In her meditations on the Christian creed (first published in 1934, and now compiled as The School of Charity), she writes, “The spiritual life is a stern choice. It is not a consoling retreat from the difficulties of existence; but an invitation to enter fully into that difficult existence, and there apply the Charity of God and bear the cost.”

But she is also cognizant that the spiritual life can be neither hurried nor forced. Again, in The School of Charity, she writes,

“We are constantly beset by the notion that we ought to perceive ourselves springing up quickly, like the seed on stony ground; show striking signs of spiritual growth. But perhaps we are only required to go on quietly, making root, growing nice and bushy; docile to the great slow rhythm of life. When we see no startling marks of our own religious progress or our usefulness to God, it is well to remember the baby in the stable and the little boy in the streets of Nazareth.”

For Underhill, spirituality is rooted in an existence with God in all aspects of life. In The Spiritual Life (1936), she writes,

“We mostly spend [our] lives conjugating three verbs: to Want, to Have, and to Do. Craving, clutching, and fussing, on the material, political, social, emotional, intellectual—even on the religious—plane, we are kept in perpetual unrest: forgetting that none of these verbs have any ultimate significance, except so far as they are transcended by and included in, the fundamental verb, to Be: and that Being, not wanting, having and doing, is the essence of a spiritual life.” 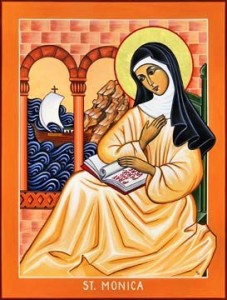 Monnica is well-known as the icon of the relentlessly supportive mother. In his Confessions, her son, St. Augustine, describes the Lord’s favor for the tears she wept on his behalf. “They flowed down from her eyes and watered the earth beneath, in whatsoever place she prayed.”

Still, Monnica must have had her moments. Just as she was getting fed up with Augustine’s dissolute behavior and distancing herself from him, she had a dream. Her son later recounts:

“She saw herself standing upon a certain wooden rule, and coming towards her a young man, splendid, joyful, and smiling upon her, although she grieved and was crushed with grief. When he asked her the reasons for her sorrow and her daily tears...she replied that she lamented for my perdition. Then he bade her rest secure, and instructed her that she should attend and see that where she was, there was I also. And when she looked there she saw me standing on the same rule.

“Whence too was this, that when she had narrated the vision to me and I attempted to distort it to mean rather that she should not despair of becoming what I already was, she immediately replied without any hesitation: ‘No!’ she said. ‘It was not said to me, ‘Where he is, there also are you,’ but ‘Where you are, there also is he.’ .... By this dream the joy of that holy woman, to be fulfilled so long afterwards, was predicted much beforehand so as to bring consolation in her then present solicitude.” Confessions 3.19-20

While her tears and concern for Augustine’s eternal fate did not abate, she began to take heart in the reassurance of the vision she received from God and to act as though his conversion would come to pass. A similar thing happens to Harry Potter in “The Prisoner of Azkaban” when he has the confidence to conjure a protective charm to shield himself, Hermione, and Sirius because he knows he already did it three hours before. Jesus riffs on the same theme just before he is betrayed when he says, “I have said this to you, so that in me you may have peace. In the world you face persecution. But take courage; I have conquered the world!” (John 16:31) Perhaps in God’s economy time is a frivolous and untrustworthy commodity when we’re assured of the outcome.

Apparently, however, she did not have such faith in all of her fanciful notions concerning her soon-to-be famous son. During a particularly pushy episode, Monnica advocated for a socially advantageous marriage and saw “certain vain and fantastic things” that might come to pass if the marriage was made. However, she is clear to Augustine when it all came to naught that she did not confuse her imaginings with true revelations from God. “She said that she could distinguish by some sort of savor, which she could not explain in words, the difference between your revelations and her own dreaming soul.” Confessions 6.23

When she visited a local North African bishop to urge him to meet with Augustine, he reassured her that he himself had been misled as a lad but found his way back to the faith:

“When he had spoken these words, and she still would not keep quiet, but by her entreaties and flowing tears urged him all the more to see me and discuss matters with me, he became a little vexed and said: ‘Go away from me now. As you live, it is impossible that the son of such tears should perish.’ As she was often wont to recall in her conversations with me, she took this as if it had sounded forth from heaven.” Confessions 3.21

These encounters inspired in Monnica a remarkable confidence in the efficacy of her ardent prayers to see her son come to accept the Christian faith. Her confidence sustained her until Augustine converted in 387, marking nearly two decades of pressing on for the prize.

71 comments on “Monnica vs. Evelyn Underhill”