Today in Lent Madness it's the long-anticipated Battle of the Curmudgeons: Philander Chase vs. Jerome. To put it into rhyme (and demonstrating a nuanced, if gender exclusive, use of French), "I do declare, this is not a touchy-feely pair, mon frere." Will the Kenyon College mafia again rise to put Philander over the top? Or will Jerome's jihad put an end to this Cinderella story? Many plot lines, but only one will make it to the Elate Eight.

Yesterday, Mary Magdalene trounced Joan of Arc 74% to 26% to advance to the next round. Make sure to check out the updated bracket courtesy of our unsung Bracket Czar and Celebrity Blogger Adam Thomas. This beautiful bracket even got top billing in yesterday's Houston Chronicle article about Lent Madness.

As this is the last clash of the week, we do wish everyone luck in dealing with their Lent Madness Withdrawal (LMW) this weekend. If you're feeling particularly lost, feel free to call the Lent Madness Counseling Hotline (LMCH) 24-hours a day. You might recognize the digits as you dial since they're quite similar to Scott's home number. Lent Madness insomniacs are encouraged to contact the LMCH at all hours of the night -- just ask for "Scott." (Please note that after-hours calls may be transferred to our Hingham call center.) And we'll see you all bright and early Monday morning as the Round of the Saintly Sixteen continues with Enmegahbowh vs. David Oakerhater. 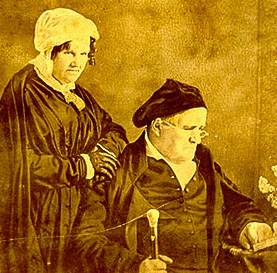 “Well, this will do!” exclaimed Bishop Philander Chase upon seeing the “landscape of unsurpassed loveliness and beauty” that would become the site of Kenyon College near Owl Creek in Knox County, Ohio. Lawyer Henry B. Curtis recorded Chase saying these words, his way of expressing “delight and satisfaction.”

This exclamation seems to be as laconic as Bishop Chase was wont to become; indeed, he subscribed diligently to the lengthy and complex sermon, which, to be sure,was the style of the day (making it difficult for this author to pick out quotations for you, dear reader). In preaching at the consecration of three other bishops, one moment stands out. Perhaps the Bishop was thinking about the vista of Kenyon when he preached,

“Once more: not only in the main and leading features of the Law and the Prophets do we see the illustration of the truth contained in the words of the text, but the same appears in those things which, were it not for the importance of the subject, might be deemed of small moment; the revelation of God, in this respect, being like his works in nature. It is not only in the sun, in the moon and in the planetary system, and the vast order of the Universe, that the wisdom, the power and the goodness of God appear: but even the flowers of the field in their minutest examination, by microscopic glasses, equally gratify the taste for divine knowledge in every humble and diligent inquirer.”

In another sermon, this time preached by a young Chase at the institution of another priest, the soon-to-be pioneer detailed the mettle of a preacher:

“If [congregants] are commanded to hear and receive God's word, we are bound faithfully to preach it to them: to which end, two things are necessary; first, that we ourselves know and understand the word which we preach; and the second is, that we have fortitude to declare it. The former cannot be attained, without much study and devout application; and the latter requires that we bear ever in mind whose ambassadors we are, and to whom we stand accountable. Let us, then, with unremitting prayer to God, for the aid of his Holy Spirit, apply ourselves to the study of our BIBLES; and to everything, which may lead us righty to understand them, that we be not ‘novices:’ and let us take care that we never sacrifice truth or duty unto popularity; that we deserve not the shameful epithet of ‘pleasers;’ two characters utterly inconsistent with the office which we bear, and the vows which are upon us.”

In the previous examination of Chase’s life, many were dismayed by his seeming cavalier treatment of his consumptive wife. Whether or not the move to Ohio somehow precipitated Mary’s death, that Chase loved both Mary and his second wife Sophia should not be in doubt. We finish on an intimate note, the conclusion of a letter from Philander to Sophia: “I write by a poor dim hogs lard lamp, which, shining askance on my paper, will hardly permit me to say how faithfully I’m your affectionate Husband. P. Chase” 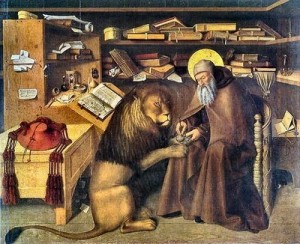 Jerome (c.347- 420) was the most famous Biblical scholar of ancient Christianity. Paintings of him often include, oddly, a lion. That frequent zoological addition refers not to Jerome’s curmudgeonliness but to the legend that a lion once limped into his monastery in Bethlehem and became his friend after he removed a thorn from the lion’s paw. When the monastery’s donkey mysteriously vanished, the other monks accused the lion of eating it. However, the lion eventually found the donkey in the caravan of the merchants who stole it and proved his innocence.

That same theme of friendship appears at the conclusion of Jerome’s letter in the year 374 to Rufinus the Monk:

“However, to return to the point from which I set out, I beseech you do not let me pass wholly out of sight and out of mind. A friend is long sought, hardly found, and with difficulty kept. Let those who will, allow gold to dazzle them and be borne along in splendor, their very baggage glittering with gold and silver. Love is not to be purchased, and affection has no price. The friendship which can cease has never been real. Farewell in Christ.”

Finally, here’s another interesting quote from Jerome’s preface to the third book of his commentary on Galatians:

“How few there are who now read Aristotle. How many are there who know the books, or even the name of Plato? You may find here and there a few old men, who have nothing else to do, who study them in a corner. But the whole world speaks the language of our Christian peasants and fishermen, the whole world re-echoes their words. And so their simple words must be set forth with simplicity of style; for the word simple applies to their words, not their meaning. But if, in response to your prayers, I could, in expounding their epistles, have the same spirit which they had when they dictated them, you would then see in the Apostles as much majesty and breadth of true wisdom as there is arrogance and vanity in the learned men of the world. To make a brief confession of the secrets of my heart, I should not like anyone who wished to understand the Apostle to find a difficulty in understanding my writings, and so be compelled to find someone to interpret the interpreter.”

98 comments on “Philander Chase vs. Jerome”