For the second straight day we get a man named Thomas opposed by a saint with a fantastic name. In 24 hours we've gone from Merton to the Apostle; from Philander to Enmegahbowh. But, of course, in Lent Madness saints don't emerge victorious by fanciful names alone. Otherwise Engelbert Humperdinck would be canonized and win the Golden Halo.

Bracket Buster Alert! In one of the most hotly-contested battles to date, Philander Chase stormed past Thomas Merton late yesterday afternoon and never looked back. Despite a late surge by Merton, Chase held on to win 52% to 48% in record voting (2,711 votes cast) and commenting (142 comments). Spurred on by an army of Kenyon College alumni, this may go down as one of the greatest upsets in Lent Madness history.

Check in with the updated bracket and view the calendar of upcoming battles as we mark one full week of Lent Madness action. 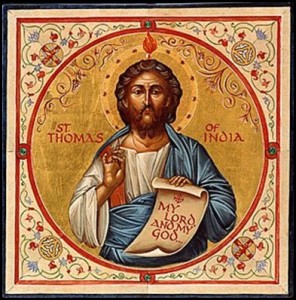 Thomas, aka “Doubting” Thomas, aka “Didymus,” aka “The Twin,” is best known for wanting something more than his fellow-apostles’ word that Jesus had appeared to them in the flesh after he had been crucified. It could also be noted that Thomas was the only apostle to leave the house after Jesus’ crucifixion when everyone else was waiting inside with the doors locked out of fear. When Jesus returned to the house a second time, Thomas, despite his stated demands for hands-on proof, did not hesitate to call the resurrected Jesus “My Lord and my God!”

Thomas does not appear often in the gospels, but his few recorded words speak of someone willing to follow Jesus wherever he may go no matter the cost. When Jesus decided to visit Mary and Martha after the death of Lazarus, despite the danger to himself, it is Thomas who says, “Let us also go, that we may die with him.” When Jesus tells the disciples during the Last Supper that he “will come again and will take you to myself, so that where I am, there you may be also. And you know the way to the place where I am going,” it is Thomas who says, “Lord, we do not know where you are going. How can we know the way?”

After the resurrection, Thomas’ willingness to follow Jesus evidently did not flag. Legend has it that he went to India where, after converting many people (and baptizing the three kings of the Nativity story), he was martyred by an angry king who had him run through with a sword. The church in India claims Thomas as its founder and patron saint to this day.

Collect for Thomas: Almighty and everliving God, who strengthened your apostle Thomas with sure and certain faith in your Son's resurrection: Grant us so perfectly and without doubt to believe in Jesus Christ, our Lord and our God, that our faith may never be found wanting in your sight; through him who lives and reigns with you and the Holy Spirit, one God, now and for ever. Amen. 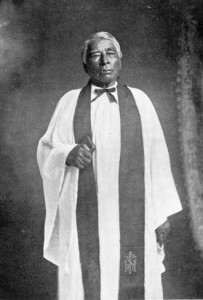 Called the “Providential Man” by church historian Theodore Holcombe, Enmegahbowh, or John Johnson as he was known at his baptism, was the first Native American to be ordained a deacon and priest. Born about a day’s journey north of Toronto in c. 1820 Enmegahbowh, the son of a chief, was set apart as a healer from childhood. Indeed, his name means “the man who stands by his people.”

He learned to speak English when he journeyed to Minnesota as a translator for Methodist missionaries. However, like many of us, he was wooed to the Episcopal Church by the language after a chaplain at Fort Snelling presented him with a copy of the Book of Common Prayer.  He began a correspondence with the missionary priest Dr. James Lloyd Breck and invited him to establish a mission in Gull Lake. Upon his arrival Enmegahbowh was baptized and, in 1859, he was ordained as a deacon. In these years he maintained a peaceful and courageous presence at the St. Columba’s Mission in the midst of great turmoil and violence among the white settlers and local Chippewa people.

In 1867 Bishop Henry Whipple ordained him to the priesthood and a year later he and his remarkable wife Biwabiko-geshig-equay (stay tuned for more on her in the next round if Enmegahbowh advances) moved - at the invitation of more than 100 chiefs and principal men of the tribe - to serve the people of the White Earth reservation. He died there after nearly 40 years of quiet ministry on June 12, 1902.

A tower of strength, constancy, and patience, “Enmegahbowh was a herald of all our Indian work;” wrote Holcombe in his 1902 biography of Breck. [He was] “the man who cried from the wilderness, ‘Come over and help us’, the man who opened the door for all that has since followed of God’s work for the Indians, even to the Pacific Coast.”

A Collect for Enmegahbowh: Almighty God, you led your pilgrim people of old with fire and cloud: Grant that the ministers of your Church, following the example of blessed Enmegahbowh, may stand before your holy people, leading them with fiery zeal and gentle humility. This we ask through Jesus, the Christ, who lives and reigns with you in the unity of the Holy Spirit, one God now and for ever. Amen.

118 comments on “Thomas vs. Enmegahbowh”