Yes, Virginia, there is a St. Nicholas 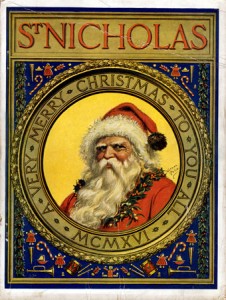 Here at Lent Madness, we take seriously our commitment to answer the bags and bags of viewer mail that we receive each day. Following St. Nicholas’ defeat at the hands of Evelyn Underhill on Friday, one letter in particular caught our eye and we thought we’d share it with you.

I am 8 years old. Some of my little friends say there is no Saint Nicholas. Papa says, “If you see it on www.lentmadness.org, it’s so.” Please tell me the truth, is there a Saint Nicholas?

Well, we couldn't leave precious Virginia wondering about the existence of Saint Nicholas so we sent her this letter in reply:

Your little friends are wrong. They have been affected by the skepticism of a pre-Lent Madness age. Like a saint named Thomas who once doubted Jesus’ resurrection (and then lost to Enmegahbowh), they do not believe except what they see. They think that nothing can be which is not comprehensible by their little minds. All minds, Virginia, whether they be a great intellectual’s like St. Jerome (who was responsible for translating Scripture into Latin in the edition known as the Vulgate and will soon be facing off against Philander Chase in the Round of the Saintly Sixteen) or a child’s, are little.

Not believe in Saint Nicholas! You might as well not believe in Dietrich Bonhoeffer or Thomas Cranmer or the Supreme Executive Committee of Lent Madness. Nobody sees Saint Nicholas, but that is no sign that there is no Saint Nicholas. The most real things in the world are those that neither children nor adults can see. Did you ever see Scott and Tim filming “Monday Madness?” Of course not, but that’s no proof that they only exist inside your computer.

No Saint Nicholas! Thank God he lives and lives forever. A thousand years from now, Virginia, nay 10 times 10,000 years from now, he will continue to make glad the heart of children who participate in Lent Madness. Even if he likely would have lost to St. Margaret of Scotland in the next round.

PS. Good luck with your weekend case of LMW (Lent Madness Withdrawal) and know that voting resumes tomorrow at 8:00 am with Rose of Lima battling Brigid of Kildare.

15 comments on “Yes, Virginia, there is a St. Nicholas”