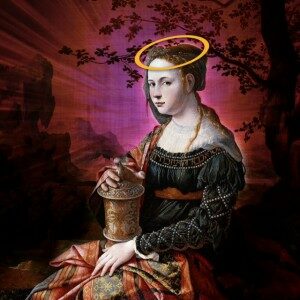 The Holy Gospel of Lent Madness,
according to the Supreme Executive Committee.

Early on the first day of the week, while it was still dark, Mary Magdalene came to the tomb and saw that the stone had been removed from the tomb. But Mary stood weeping outside the tomb. As she wept, she bent over to look into the tomb; and she saw two angels in white, sitting where the body of Jesus had been lying, one at the head and the other at the feet. They said to her, ‘Woman, why are you weeping?’ She said to them, ‘They have taken away my Lord, and I do not know where they have laid him. Plus, I was worried that Emma might win the Golden Halo once all of Hawaii cast their votes.’ When she had said this, she turned round and saw Jesus standing there, but she did not know that it was Jesus. Jesus said to her, ‘Woman, why are you weeping?’ Supposing him to be the gardener, she said to him, ‘Sir, if you have voted for Emma please tell me and I will go away.’ Jesus said to her, ‘Mary! You have won the 2012 Golden Halo!’ She turned and said to him in Hebrew, ‘Rabbouni!’ (which means Holy Toledo!). Jesus said to her, ‘Do not hold on to me, because I have not yet decided upon the bracket for Lent Madness 2013. But log onto www.lentmadness.org and encourage my disciples to buy a commemorative mug.' Say to them, “I am ascending to my Father and your Father, to my SEC and your SEC (to straighten out those two goofy priests).”’ Mary Magdalene went and announced to the disciples, ‘I have seen the Lord.’ And then she told them she had won the Golden Halo. They were amazed, but Thomas cast his eyes downward, for he remembered his poor performance in the first round .

The "Gospel" of the Supreme Executive Committee.