Benedict of Nursia vs. Anne

Another day, another romp. At least that's what many were thinking after Harriet Tubman trounced Nicholas Ferrar in yesterday's Lent Madness showdown. Today we're anticipating a much closer match-up as the father of monasticism takes on the grandmother of Jesus. Is blood thicker than compline? This and other questions will be answered by the Lent Madness faithful over the next 24 hours.

There are many rumors flying around the world about the timing of Pope Benedict XVI's retirement on the very same day that his namesake, Benedict of Nursia, appears in Lent Madness. It's obviously not a coincidence and we're assuming that a bunch of people named Anne will also retire today. We wish them all well in their golden years. For Benedict and Anne, however, only time will tell whether they'll be enjoying their Golden Halo years. 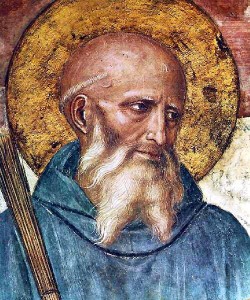 Benedict of Nursia (c.480-c.550) was born into a world that was disintegrating. The Roman Empire had become a shadow of its former self. Benedict moved from his hometown of Nursia to Rome as a student. But he found there too much of an erosion of morality for his tastes. So he abandoned the “Eternal City” for a hillside cave and became a hermit for three years.

Although Benedict is called the “Father of Western Monasticism,” communities of Christian monks had existed for centuries before his birth. One group of monks, in fact, begged him to become its abbot while he was living as a hermit. Benedict tried that, but it didn’t work out. One legend describes how those monks tried to poison him unsuccessfully. Regardless, Benedict left them and eventually founded a monastery between Rome and Naples at Monte Cassino.

There he wrote his famous Rule for monastic life. The seventy-three short chapters of that Rule present the ideal of a balance between prayer and work. One of them also includes these well-known words about hospitality: “Let all…be received as Christ.” So what Benedict really did was to channel the stream of monasticism in fresh and creative ways that have proven for nearly 1,500 years to be life-giving to the whole world.

Here’s part of an ancient poem that was written after Benedict’s death by one of his companions named Marcus:

With hard and toilsome labour ‘tis that great things are attained:
Within the narrow path alone the blessed life is gained.
While hither coming penitent bow’d down with load of sin,
I felt its weight was gone from me, I felt at peace within;
And I believe in bliss above I too shall have my share,
If thou for Marcus, Benedict, wilt breathe an earnest prayer.

Benedict’s spirit is alive and well throughout the world today (and not only in Roman Catholic circles). My own congregation had a beloved assisting priest who retired last year and belonged to a religious community of Benedictines in the Episcopal Church. And thanks to the hospitality of Roman Catholic Benedictines, the Episcopal House of Prayer sits on five acres on the grounds of St. John’s Abbey in Collegeville, Minnesota. St. John’s is the second largest Benedictine monastery in the Western Hemisphere. It’s home to the world’s largest archive of manuscript photographs and to the St. John’s Bible, which is the first handwritten, illuminated Bible that a Benedictine monastery has commissioned in more than 500 years. Thankfully, guided by the Rule of St. Benedict, the priorities of these Benedictine monks in both the Anglican and Roman Catholic traditions remain the same: Praying, working, and receiving all as Christ.

Collect for Benedict of Nursia
Almighty and everlasting God, your precepts are the wisdom of a loving Father: Give us grace, following the teaching and example of your servant Benedict, to walk with loving and willing hearts in the school of the Lord’s service; let your ears be open to our prayers; and prosper with your blessing the work of our hands; through Jesus Christ our Lord, who lives and reigns with you and the Holy Spirit, one God, for ever and ever. Amen.

Anne is not mentioned in any of the canonical gospels, and there is no historical record of her life. Her name and the legend of her life are instead found in the Protoevangelium of James, a New Testament-era apocryphal gospel dating to around AD 150.

Legend holds that Anne was married to Joachim, and that the two were childless in their old age – a fact which deeply grieved both of them. As Joachim went into the desert for forty days and forty nights to fast, Anne sat and lamented both her pending widowhood and her childlessness. During Joachim’s absence, Anne sat beneath a laurel tree, and prayed she would receive a child just as Sarah received Isaac in her old age. As she bewails her inability to conceive, an angel appears to Anne, and promises her that she will conceive, and that “your child will be spoken of in the whole world.” (Pro.James. 4:1). In response, Anne promises that the child – whether male or female – will be brought as a gift to God, and will minister before God all the days of its life. Nine months later, Mary is born to Joachim and Anne. A year after Mary’s birth, Joachim presents Mary to the priests, and in their prayer of blessing pray that she will be given “an eternal name among all the generations” (Pro. James. 6:2). When Mary turned three, Joachim and Anne give Mary into the service of the temple in fulfillment of the promise Anne made to the angel when she announced Mary’s birth.

Anne’s legend heavily echoes the story of two barren women in the Old Testament – Sarah, who gives birth to Isaac in her old age; and Hannah, who gives birth to Samuel after being thought to be barren, and dedicates him to the service of the temple. Indeed, Anne’s name in Hebrew is “Hannah,” meaning “favor” or “grace.”

Devotion to Anne dates to the patristic era. The emperor Justinian built a church in Constantinople in her honor; her feast began to be observed in the west by the 14th century. By the end of the middle ages, devotion to St. Anne had become wide spread, and became a target for the Protestant Reformers, most especially Martin Luther. Nonetheless, in 1584, it was made a feast in the Roman Catholic Church.

In the Orthodox tradition, Anne is given the title “Forbear of God,” and the Birth of Mary (September 8) and the Dedication of Mary in the Temple (November 21) are principal feasts of the church. In the Western Church, her feast is celebrated with her spouse, Joachim, on July 26.

Almighty God, heavenly Father, we remember in thanksgiving this day, Anne, mother of of the Blessed Virgin Mary; and we pray that we all may be made one in the heavenly family of your Son Jesus Christ our Lord; who with you and the Holy Spirit lives and reigns, one God, for ever and ever. Amen.

Benedict of Nursia vs. Anne

170 comments on “Benedict of Nursia vs. Anne”