Did you ever think you'd utter the phrase "Thank God It's Lent?" Well, thanks to today's kick-off of Lent Madness 2013, you'll probably be hearing people saying "T.G.I.L." all day. In fact, we wouldn't be surprised to see a restaurant chain spring up called T.G.I. Lent's.

In any case, we're delighted to welcome you to this year's Saintly Smackdown with a First Round battle between Jonathan Daniels and Macrina the Younger. Yes, it's a martyred 20th century civil rights advocate versus a 4th century teacher and monastic. Such is the "madness" of Lent Madness.

If you're new to Lent Madness, welcome! You may want to check out the Voting 101 video if you have any questions. Be sure to sign up for e-mail updates on our home page so you never miss a vote, like us on Facebook, follow us on Twitter, and encourage your friends to jump into the fray. While you are on our Facebook page today, please "Check In" to Lent Madness so all your friends will know you have gone to Lent Madness.

We can assure you this will be a wild, joyful, educational, ocassionally gut-wrenching ride. Let the madness begin! 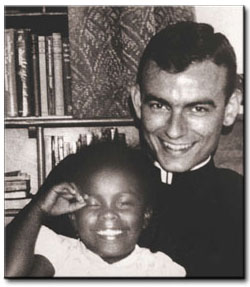 On Sunday, March 7, 1965, Jonathan Myrick Daniels, a second-year student at the Episcopal Theological School (ETS, now EDS) in Cambridge, Massachusetts, watched as television newscasts showed Alabama State Troopers beating and tear-gassing civil rights marchers as they attempted to cross the Edmund Pettus Bridge. The next day, Martin Luther King, Jr. called for white clergy from the North and people of good will to stand with the protesters. Daniels and 10 other ETS students answered the call, flying to Atlanta and arriving late Monday night.

After traveling by bus from Atlanta to Selma, on Tuesday, March 9, Daniels and about 2,500 others participated in the second march to the Pettus Bridge and back. Later that day, three white ministers who had come for the march were beaten, one of them (who had traveled from Boston on the same flight as Daniels) dying two days later.

At the end of the weekend, Daniels and fellow seminarian Judith Upham missed the bus that would take them back to Atlanta and on to seminary. As they watched many of the white protesters leave, Daniels and Upham began to feel it wouldn’t be right to abandon those left in the struggle. Returning to ETS, they petitioned the seminary to let them go back to Selma for the semester.

Daniels and Upham returned to Selma on March 21 and joined the final march to Montgomery. Staying with a local family, they “just hung around, doing what we could to help,” according to Upham, including tutoring children, registering voters, and integrating St. Paul’s Episcopal Church.

After taking his finals in Cambridge, Daniels returned to Alabama for the summer. On August 13, after picketing a whites-only store in Fort Deposit, Daniels and around 30 other protesters were arrested and jailed in Hayneville. Released a week later with no transportation back to Selma, Daniels, 17-year-old Ruby Sales and two others went to Varner’s Cash Store for Coca-Cola where they were confronted by an unpaid special deputy with a shotgun. The deputy threatened the group and took aim at Ruby Sales. Pushing Ruby out of the way, Daniels took the full brunt of the shotgun blast and died instantly. He was 26.

Ruby Sales, who was saved by Daniels’ actions that day, went on to attend EDS and founded the SpiritHouse Project and the Jonathan Daniels and Samuel Younge Institute. Judith Upham became a priest in 1977 and still serves at St. Alban’s, Arlington, TX. The Diocese of Alabama hosts a yearly pilgrimage to Hayneville in honor of Jonathan Myrick Daniels and the Martyrs of Alabama. In addition, Daniels’ alma mater, the Virginia Military Institute, has established a humanitarian award in his honor.

Collect for Jonathan Daniels
O God of justice and compassion, you put down the proud and the mighty from their place, and lift up the poor and afflicted: We give you thanks for your faithful witness Jonathan Myrick Daniels, who, in the midst of injustice and violence, risked and gave his life for another; and we pray that we, following his example, may make no peace with oppression; through Jesus Christ the just one: who lives and reigns with you and the Holy Spirit, one God, for ever and ever. Amen. 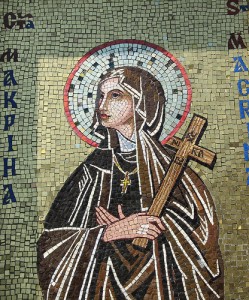 Macrina the Younger (to distinguish her from her granny, Macrina the Elder, in a time before surnames) was the oldest child of a wealthy Christian family in Caesarea, Cappadocia, in the Roman Empire. She was educated in Holy Scriptures, and had a particular interest in the Psalter and the Wisdom of Solomon and focused on ethics in the Bible. When her betrothed died (she was to be married at the ripe old age of 12), she decided to dedicate herself to a journey into Christian wisdom. Her theology, known to us through the writings of her brother Gregory, reminds us that a Christian’s journey is not an inconvenience simply to get to the destination; the journey is the joy itself, filled with the wealth of relationships good and bad, mistakes, successes, and moments that take our breath away and moments that leave us in tears. For Macrina, the journey with Christ is the destination.

Macrina’s journey may not have left us speeches, writings, or sermons, but her life was preached in a breathtaking way through her relationships. Two of her brothers, Gregory and Basil, became two-thirds of the Cappadocian Fathers, men who helped finalize the Nicene Creed and gave words to the great mystery of the Christian faith. Gregory and Basil were bishops, as well as another brother Peter, in part from their sister who refused to let them believe their own hype. She reminded them that Christian faith demanded humility, dedication, and service. She told Gregory his fame had nothing to do with his own merit, and when Basil returned from a successful preaching tour with the big head, we are told she dressed him down considerably (or, as we say in the South, took him out to the veranda for a talking to). She served as an example for Basil and Peter, who followed their sister’s lead and renounced material wealth and focused their education on theology and Holy Scripture. While her brothers may have been early church rock stars, Macrina frequently challenged them on their theology, spiritual practices, and opinions and often, they realized she was right.

She also converted her family’s large, wealthy estate in Pontus to a monastery that cared for the poor and provided a safe, peaceful shelter for study and meditation for women and men alike. Many who lived, studied, and prayed in her monastery were starving women she would find while walking on the roads around the city. Basil and Peter used her life as a monastic to write a Rule for community life; therefore, Macrina became the spiritual mother of monasticism.

Gregory of Nyssa visited his sister as she lay dying and later shared her last words, a mixture of a Greek farewell oration and reflections on Holy Scripture, in his writings. One of the great fathers of Christian theology, Gregory of Nyssa (a saint), and one of the great fathers of Christian spirituality, Basil the Great (a saint, too), called this woman, their sister, the greatest teacher of the faith they ever encountered. Macrina, in her faith, her intelligence, her deep humility, lived a gentle life, and the elements of strength, love, and mercy so mixed in her that the great Fathers of our faith would say to all the world, “This was a woman.”

Collect for Macrina the Younger
Merciful God, you called your servant Macrina to reveal in her life and her teaching the riches of your grace and truth: May we, following her example, seek after your wisdom and live according to her way; through Jesus Christ our Savior, who lives and reigns with you and the Holy Spirit, one God, for ever and ever. Amen.

148 comments on “Jonathan Daniels vs. Macrina the Younger”