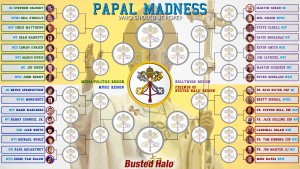 The Supreme Executive Committee has been made aware of something called “Papal Madness,” an effort to suggest an alternative for electing the successor to Pope Benedict XVI. In this so-called Papal Madness scheme, or should we say, schemes, brackets would be used to choose the Vicar of Christ.

You can see the problem. The Papal Madness people have stolen our idea. There is only one Madness right now, and it is Lent Madness. We expect a profuse apology any moment now. If only they had asked, we could have helped them. After all, doesn’t it make sense that the Supreme Executive Committee would be involved in the selection of the Supreme Pontiff?

We also note that Benedict has decided to retire on February 28, the day that Benedict of Nursia enters the playing field of Lent Madness. Is the Holy Father setting aside the papal crown in order to lobby for the Golden Halo for his namesake? Or is the Pope planning to devote his time to campaigning for Gregory the Great, the only pope in the bracket this year? Only time will tell.

For now, it is enough for us to cry foul at another entity trying to ride our coattails. Lent Madness was created before the papal pretenders got into the bracket business. Until they repent, we declare a bracket anathema upon them. And we are considering unleashing the Lent Madness Legal Team upon their heads.

We have to draw the line. Otherwise, what’s next? Announcing the election of a new pope with purple smoke?

36 Comments to "Whose Madness Is It, Anyway?"

1 Trackback to "Whose Madness Is It, Anyway?"