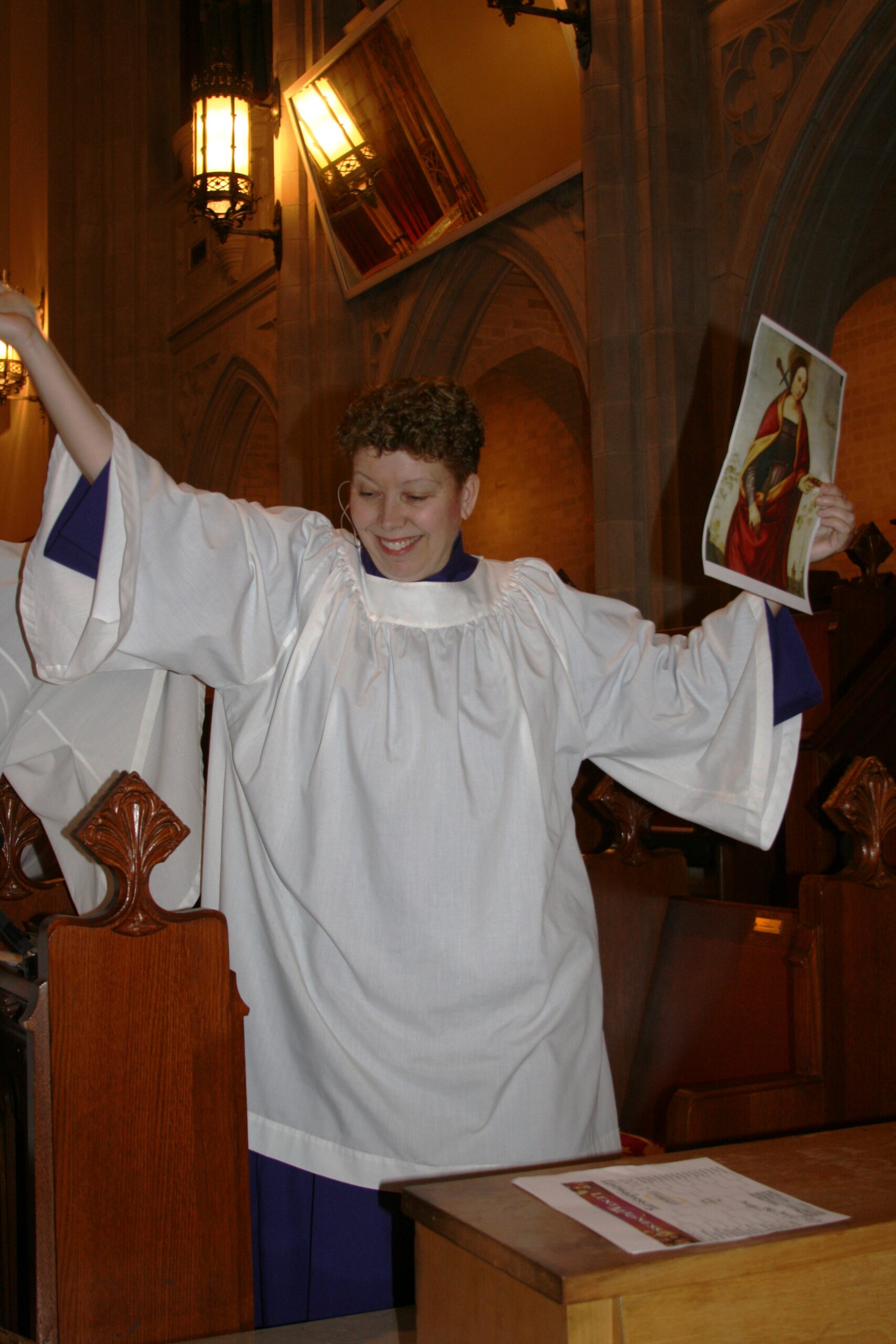 One of the fun things about hanging out at Lent Madness Headquarters (Cincinnati, Ohio or Hingham, Massachusetts, depending on your perspective), is hearing all the creative ways Lent Madness is being used this year. During the darkness of another weekend of Lent Madness Withdrawal (LMW), we wanted to highlight a few places where Lent Madness is inspiring creativity.

Lent Madness was a big hit at St. Mark's Cathedral in Shreveport, Louisiana, as students at the Cathedral School and their families gathered at yesterday's Family Chapel service. Head of School Chris Carter organized a Lent Madness event based on the contest of the day, Oscar Romero vs. Lucy. After presentations by the Very Rev. Alston Johnson, Dean of the Cathedral, standing in for Romero and Dr. Judy Kane, School Chaplain, representing Lucy, everyone cast a vote for their favorite. 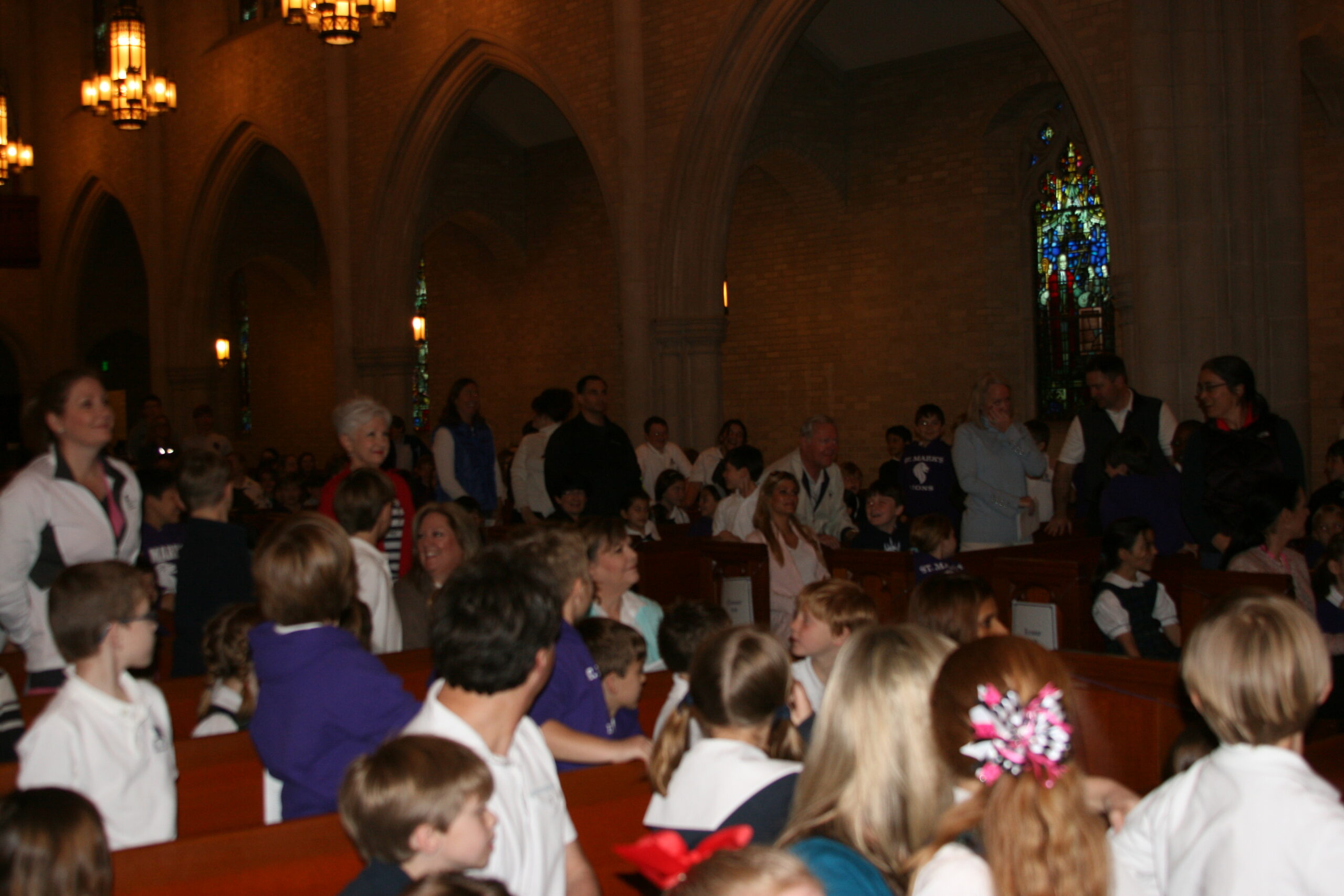 Chris reports that, while parents and teachers voted for Romero, Lucy completely ran off with the student vote. As he put it:

I really expected everyone to go for Romero, but I think the eyeballs won it for Lucy! There was a collective “eeww” when I told that part of the story, followed by grins on the faces of every Lower School boy in the Cathedral! Lucy won definitively, although Romero did have some following. It was nice that both showed great commitment to the poor, since today was the day we wrapped up our Lenten outreach projects. The basic message was service to God and others before self, which worked with the Gospel lection and both Lucy and Romero.

After the service Chris mentioned that one parent, "admittedly a Cowboys fan," told him he was delighted to see Louisiana students think of Saints as someone other than Drew Brees and his teammates! 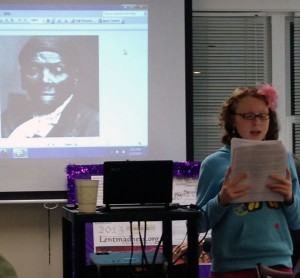 At St. Philip's Church in Southport, North Carolina, the Wednesday evening Lenten series is dedicated to Lent Madness. After a simple soup supper, the participants stand up to advocate for a particular saint participating in an upcoming battle. According to an article in Wilmington Faith & Values, some contestants have gone to great creative lengths to present their chosen saint. One parishioner dressed up as John the Baptist, one created a t-shirt, and another made heart-shaped bookmarks to remind everyone of St. Benedict's love for all people.

This has all been brilliantly organized by Millie Hart, the parish's Christian Education Director. And we were delighted to learn that this has become an intergenerational learning experience as well: a ten-year-old recently advocated for Damien of Molokai. 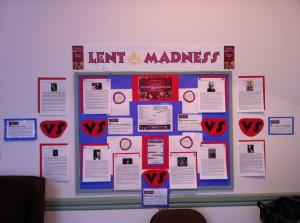 Bulletin Board fodder at Holy Cross in Plainfield, NJ.

Lent Madness has also led to some wonderful bulletin board displays in several parishes. Of particular note is the bulletin board at Holy Cross Church in Plainfield, New Jersey. They are so ready for the Round of the Saintly Sixteen! We also understand that they're in between rectors right now -- supply priest the Rev. Stephanie Shockley sent us the photo. So, clergy in discernment, take a look. Who wouldn't want to serve a parish that was so into Lent Madness? When you apply, just tell them the guys at Lent Madness sent you. And a note to the vestry: we'll look forward to receiving our finder's fee. 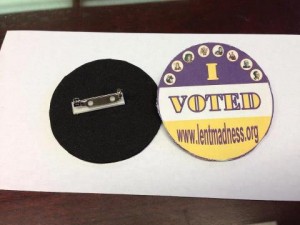 In a show of cross-church cooperation, parishioners at St. Christopher's in Midwest City, Oklahoma, made their own "I Voted" button based on a design from Grace Church in Medford, Massachusetts. If we had to guess, no one in Midwest City had ever heard of Medford before Lent Madness and vice versa. New Lent Madness slogan? "Making connections and bringing people together since 2010."