Here’s a match-up that may have you scratching your hair shirt. James Theodore Holly, pioneering African-American bishop and missionary versus Harriet Beecher Stowe, author and abolitionist. Two 19th century figures who had a major impact upon race relations in the United States and abroad.

Yesterday F.D. Maurice defeated David of Wales in a day that saw a brief technical glitch in the initial daily e-mail sent out to subscribers. “Yes, Virginia, there are Lent Madness gremlins.”

What’s that? You say you don’t receive these fantabulous e-mails insuring that you never miss a vote? Go to the home page and look on the right side just under the Voting 101 video — enter your e-mail address and voila! You’ll receive every match-up in your inbox at 8:00 am Eastern Standard Time.

Finally, as we enter into another exciting and occasionally heart-wrenching day of voting, remember that what we say about confessing our sins to a priest in the Episcopal Church also applies to engaging in Lent Madness: “All may, none must, some should.” 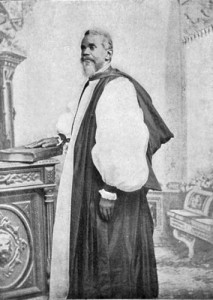 Holly founded the Episcopal Society for Promoting the Extension of the Church Among Colored People, a forerunner of the Union of Black Episcopalians. While a member, he passionately advocated for the Episcopal Church to make a public statement in opposition to slavery.

Emboldened by his belief that people of color could experience unique opportunities and freedom outside of the United States, Holly, his family, and a small group of emigrants left the United States for Haiti in 1861. During their first year on the island, many of the emigrants died, including Holly’s mother, his wife, and two children. Nevertheless, Holly went on to found Trinity Episcopal Church as well as a host of schools and health clinics. He was ordained the first missionary Bishop of Haiti in 1874.

Collect for James Theodore Holly
Most gracious God, by the calling of your servant James Theodore Holly you gave us our first bishop of African American heritage. In his quest for life and freedom, he led your people from bondage into a new land and established the Church in Haiti. Grant that, inspired by his testimony, we may overcome our prejudice and honor those whom you call from every family, language, people, and nation; through Jesus Christ our Lord, who lives and reigns with you and the Holy Spirit, one God, now and for ever. Amen. 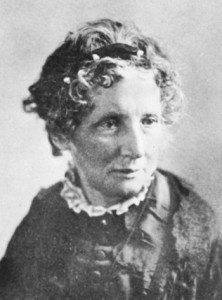 Harriet Beecher Stowe put pen to paper and changed the world. She actually wrote more than twenty books in her lifetime but is best remembered for Uncle Tom’s Cabin, which brought home the moral evil of slavery in graphically emotional terms.

Born June 14, 1811, Stowe was raised in a progressive and very devout household. She enrolled in a school run by her older sister and received an education in the classics, unusual for a girl at the time. At twenty-one, she moved to Cincinnati, Ohio (now known primarily as the headquarters city of Forward Movement, sponsors of Lent Madness) to join her father, who had moved there to serve as president of Lane Theological Seminary. There, she met Calvin Ellis Stowe, a professor at the seminary and fellow abolitionist. They got married in 1836 and had seven children. Their home became a stop on the Underground Railroad and Harriet continued with her writing and work as an abolitionist.

Stowe wrote Uncle Tom’s Cabin as a response to the passage of the Fugitive Slave Act of 1850. This law stated that if any former slave was captured in the North, they had to be forcibly returned South and returned to their owner, or sold.

By this time, Stowe and her family had moved to Maine, where her husband was teaching theology at Bowdoin College in Brunswick. Stowe would gather students and faculty to read over the chapters as she completed them. The book was published in June of 1851, when Stowe was forty-one years old. In a letter to an English Lord Chief Justice, “I wrote what I did because as a woman, as a mother, I was oppressed and broken-hearted with the sorrows and injustice I saw, because as a Christian I felt the dishonor to Christianity.” Initially, the novel came out in installments in the newspaper The National Era. She was paid only $400—considered a small payment, even for that time. When Uncle Tom’s Cabin was published in novel form, the book sold a staggering 300,000 copies in less than a year.

The book not only articulated slavery as intellectually wrong but also as emotionally wrong, with the effects of slavery played out in the tragic lives of its characters. And the book sparked outrage over slavery like nothing else had to that point. In 1862, Stowe went to the White House to meet with President Lincoln. Her son reported that Lincoln greeted her with “So you’re the little lady who wrote the big book that started this war.”

Stowe kept writing through the rest of her life, though nothing ever matched the success of Uncle Tom’s Cabin. And she kept fighting injustice. In her family’s summer home of Mandarin, Florida, she founded several integrated schools and promoted the ideal of equal education.

Collect for Harriet Beecher Stowe
Gracious God, we thank you for the witness of Harriett Beecher Stowe, whose fiction inspired thousands with compassion for the shame and sufferings of enslaved peoples, and who enriched her writings with the cadences of The Book of Common Prayer. Help us, like her, to strive for your justice, that our eyes may see the glory of your Son, Jesus Christ, when he comes to reign with you and the Holy Spirit in reconciliation and peace, one God, now and always. Amen.