And…we’re back for another week of hard-hitting, halo-busting Lent Madness action! Today we have a battle between a renowned 19th century preacher and an aged Biblical figure who held the newborn Jesus in his arms. It’s “O Little Town of Bethlehem” vs. the Nunc Dimittis as can only happen in Lent Madness.

This week we’ll see the conclusion of the Round of 32 and on Thursday we’ll commence with the Round of the Saintly Sixteen. To paraphrase Scripture, “Many (well, okay, 32) are called, but only one will receive the Golden Halo.” Onward Christian Voters! 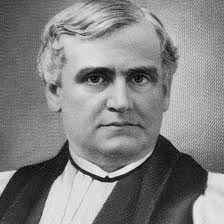 While in our day Phillips Brooks is best-known as the man who wrote the words to “O Little Town of Bethlehem”—and the prayer on the back of Forward Day by Day issues—in the mid-to late-nineteenth century, he was so renowned as a preacher that he was invited by Queen Victoria to preach at her private chapel at Windsor Castle.

Born into a distinguished, devout family in Boston in 1835, Brooks was one of six brothers, four of whom became Episcopal priests. Educated at Boston Latin, Harvard, and Virginia Episcopal Seminary, he was ordained in 1860 and served the first ten years of his ministry in Philadelphia. He was known there for his support of emancipation and, after the Civil War, full voting rights. The sermon he preached after Lincoln’s death is still highly regarded for its eloquence.

However, his home in Boston called to him, and in 1869 he became rector of Trinity Church. Three years later, the building on Summer Street was destroyed by fire, but as a testament to his leadership and gifts as a pastor, the church continued to thrive. According to Harvard Magazine, the congregation was known for its “evangelical warmth, diversity of classes, and charitable activism.”

After land was purchased at Copley Square in 1872, Brooks and his friend, the architect H.H. Richardson, designed the new Trinity, a church that became one of Boston’s most magnificent landmarks. The uncommon placement of the altar in the center of the chancel embodied Brooks’s vision, which he called “a symbol of unity; God and man and all God’s creation.” Unlike most preachers of his day, he didn’t preach from a pulpit. He was also a supporter of congregational singing.

After serving as rector of Trinity for twenty-two years, Brooks was elected Bishop of Massachusetts. He served for only fifteen months before dying of diphtheria at age fifty-seven. Harvard students carried his coffin, and the people of Boston of all religious stripes mourned the passing of a great figure.

At six feet, four inches tall and nearly 300 pounds, he was both a big person and a huge personality who was regarded as a faithful pastor along with his fame as preacher and leader of a large parish. Throughout his ministry, he devoted a great deal of care to the nurture of young people. When one young man wrote to him asking the secret of life, Brooks replied, “I am sure that it is a deeper knowledge and truer love of Christ… I cannot tell you how personal this grows to me. He is here. He knows me and I know him. It is no figure of speech. It is the realest thing in the world. And every day makes it realer.” 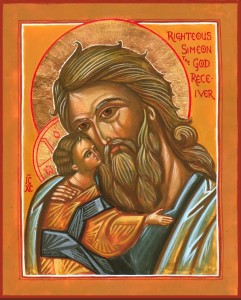 Simeon, we read in the Gospel of Luke, was a righteous and devout man living in Jerusalem. His name is the same as Simeon (Hebrew Shimon), the second son of the patriarch Jacob and his wife Leah and namesake of the Israelite tribe of Simeon. One translation of the name is “he has heard my suffering;” this meaning echoes scripture that tells how Jacob favored his other wife, Rachel, over Leah, Simeon’s mother.

An ancient legend tells that the Egyptian pharaoh Ptolemy II called seventy scholars together to translate the Holy Scriptures into Greek for the library at Alexandria (this translation would become known as the Septuagint). Simeon was one of the seventy, and while he was translating the book of Isaiah, he read, “Behold, a virgin shall conceive in the womb, and shall bring forth a Son” (Isaiah 7:14). Thinking the word virgin should read woman, Simeon began to make the correction. An angel appeared to him, saying, “You shall see these words fulfilled. You shall not die until you behold Christ the Lord born of a pure and spotless Virgin.”

According to Luke, the Holy Spirit guided Simeon into the Temple when Joseph and Mary brought Jesus there for customary Jewish rites. Simeon took the infant Jesus into his arms and prayed what has become known as the Song of Simeon, or Nunc Dimittis, traditionally used as a canticle at Evensong in The Episcopal Church:

Lord, now lettest thou thy servant depart in peace, according to thy word: For mine eyes have seen thy salvation, which thou hast prepared before the face of all people; To be a light to lighten the Gentiles, and to be the glory of thy people Israel.

When Simeon holds the infant Jesus, the ancient tribes of Israel meet the new incarnation of God. The laments of Israel are heard; the Messiah has been born and is presented in the Temple, held in the arms of the namesake of a tribe of Israel.

We don’t encounter Simeon again in Holy Scripture. Tradition says he died at a very old age. Simeon is called the God-receiver in the Orthodox Church. In the Western Church, Simeon is predominant in the Feast of the Presentation (also called Candlemas) on February 2, where the Church commemorates the dedication of Jesus in the Temple by his parents.

Collect for Simeon
Almighty God, you gave to your servant Simeon the hope and consolation of seeing your salvation in the baby Jesus at the temple. Like Simeon, give us eyes to see your salvation, that when our day comes, we too may depart this world in peace. In the name of Jesus Christ our Lord, who lives and reigns with you and the Holy Spirit, one God, now and for ever. Amen.

154 Comments to "Phillips Brooks vs. Simeon"