We're not sure if you can actually be an unsung rock star, but when it comes to Lent Madness, Adam Thomas is just that. That fancy bracket design we've been using since 2012? Adam. The usefully awesome match-up calendar? Adam. The updated hyperlinks following each battle of Lent Madness? Adam.

The SEC is ever grateful for Adam's bracket artistry and behind-the-scenes magic. If he didn't already serve a parish in Mystic, Connecticut, we'd wax eloquent about his mysticism. Ladies and gentlemen of Lent Madness, meet your Bracket Czar: 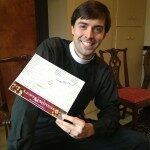 The Rev. Adam Thomas, Lent Madness Bracket Czar, was a 2012 Celebrity Blogger (most closely identified with upstart Philander Chase) who has morphed into our keeper of the bracket. This Lent is his second as rector of St. Mark’s Episcopal Church in Mystic, Connecticut. Adam is the author of Digital Disciple: Real Christianity in the Virtual World (Abingdon 2011), which you should read since you are using the Internet right now and you are more than likely a Christian. His first novel Letters from Ruby, which is about an Episcopal priest (imagine that!) arrived in August 2013, and his first large scale video bible study series Unusual Gospel for Unusual People came out in spring 2014. Adam lives in Mystic, Connecticut with his wife Leah and their twins, who are close to sleeping through the night (thank God!). Check out his website WheretheWind.com, for seven years of content. You can fan Adam on Facebook or follow him on Twitter @RevAdamThomas.

What do you most love about the extraordinary honor of being the Lent Madness Bracket Czar (besides global adulation)?

As the Bracket Czar, I have the power (and passwords) to correct Tim's typos and formatting errors when he posts Lent Madness content. I do this surreptitiously and without fanfare, except that I let Tim know every time he makes 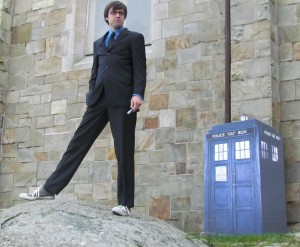 What is the quirkiest thing you've learned about one of your saints and how does this inspire your faith?
I learned how to spell Hadewijch this year. Also, just for the record, the capital "H's" for the font on the bracket look like lower case ones. But they are capitals. Look at a small "h" for comparison.

Downton Abbey or The Walking Dead and why?
Pitch: The actors who played Matthew and Sybil realized what a terrible mistake it was to leave Downton Abbey and they come back as zombies!

Besides Lent Madness, what do you most look forward to in the season of Lent?
This year, I'm looking especially forward to the devotions parishioners at my church, St. Mark's in Mystic, CT, are writing on the Gospel of Mark to be shared with the rest of the parish during Lent.