For the second day in a row, we're featuring a Celebrity Blogger from California. This has nothing to do with Tim's pining for sunshine amid the 75 inches of snow that has fallen on Hingham, Massachusetts, in the past two weeks. Laura Darling was an early adopter of Lent Madness when it began in 2010 (though back then she was Laura Toepfer). In other words she is a wise and prophetic woman.

The Rev. Laura Darling spends half of her time as the Managing Director of Confirm not Conform, an organization devoted to creating confirmation programs that celebrate questions and authentic faith; half of her time as the Director of Spiritual Care and Senior Director of Senior Resources for Episcopal Senior Communities; and the other half of her time with her wife and their three dogs and two cats. After seven years in college, youth, and parish ministry, in 2008 Laura became a Kiva Fellow and worked with microfinance agencies in Uganda before returning to her native California. She preaches regularly throughout the San Francisco Bay Area, and in her rare moments of spare time blogs at The Infusion and tweets @ldarling15. She also has a thing about obituaries.

What do you most love about the extraordinary honor of being a Celebrity Blogger (besides global adulation)?
You know, when you go out and the paparazzi are swarming and screaming, "What about Evelyn Underhill?" it can be hard. But you just have to stay grounded, you know? You just have to keep it real. I mean, all those swag bags full of relics they give you at the Golden Halo awards...you just have to remind yourself about what's important in life. The little things, like the laughter of small children, the smell of a clean refrigerator. You know what I mean? I mean, if I were a pamphlet baron or something, I think it would be different, much harder. But it's quite a simple life, being a Celebrity Blogger. I still watch House Hunters, like everyone else. I still clean out the litter box. It's a quite ordinary life, aside from the miraculous healings. 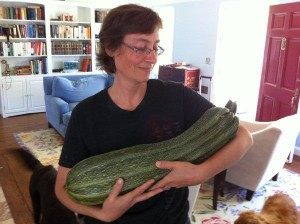 Oh, Martha! Martha! I adore her so much. I love the legend of her going to France and either dispatching and/or holy-water-stunning a dragon, which I think is such a wonderful way of thinking about how we can deal with any significant problem we face. Which is to say, going to France is always an option. But there might be dragons there.

Downton Abbey or The Walking Dead and why?
Downton Abbey. Because I like to be able to sleep at night. But I did find this mashup called Downton Zombey that I thought was quite...something.

Besides Lent Madness, what do you most look forward to in the season of Lent?
Planting things.

SEC NOTE: We have no idea whether Laura has baptized that giant zucchini that she's cradling like an infant. Don't ask, don't tell.