The final Celebrity Blogger to be highlighted is Robert Hendrickson. Since Robert was apparently too busy in his new position as Acting Dean of St. John's Cathedral (the dean was recently elected Bishop Coadjutor of the Diocese of Southeast Florida) to answer our questions, we have taken the liberty of answering for him. 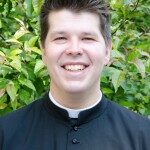 The Rev. Robert Hendrickson was born into this world by a battalion of angels. This cosmic entry into the mortal coil has ingrained in him an interest in the supernatural and the fantastical. He will not readily admit to going to the occasional Renaissance Faire nor will he admit that he has been known to play the occasional video game (Skyrim being among his oft-denied favourites). Like any serious Anglican, he reads Tolkein, Lewis, and Arthurian legends and knows them like a badger knows snakehide. Robert is the Acting Dean of Saint John’s Cathedral in Denver. He attended General Theological Seminary, was ordained to the priesthood in 2011. He has also worked with the Ecumenical Office of the Episcopal Church, co-founded the Society of Catholic Priests of the Episcopal Church, and recently completed a book on young adult ministry titled Yearning: Authentic Transformation, Young Adults, and the Church. He is married to Dr. Karrie Cummings Hendrickson and are the proud companions of Becket (a dolorous basset hound), Penelope (a fearless dachshund), Cuthbert (a once indomitable raccoon fighting cat), and Marshmallow (a rotund cat prone to wild fits of napping). 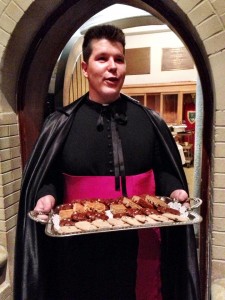 As the hymn says, they're just like you and me.

Downton Abbey or The Walking Dead and why?
I like Downton Abbey best, because it hearkens back to a time when clergy were known as Mr. Smith instead of Fr. Smith.

Besides Lent Madness, what do you most look forward to in the season of Lent?
In trying to reconnect with some ancient traditions of the church, I intend to undertake a detailed study and practice based on The 39 Articles of Religion. For all of Lent, I will be preaching using the Book of Homilies, leading off with the sermon "Against Excess of Apparel," and continuing with "Against Gluttony and Drunkenness." Likewise, following Article 18, I will give up reserving, displaying, and parading the Sacrament. I think this will be an exciting and invigorating practice to get back to the fundamental origins of Anglican Christianity.

Also, it's a nice break from saying "Alleluia! Alleluia!" at the dismissal, which I do every Sunday, except during Lent.